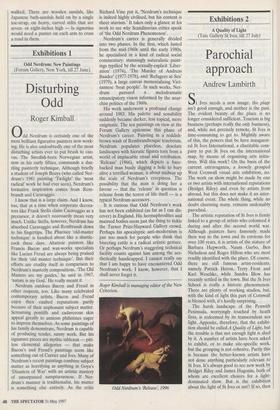 Odd Nerdrum is certainly one of the most brilliant figurative painters now work- ing. He is also undoubtedly one of the most disturbing artists ever to put brush to can- vas. The Swedish-born Norwegian artist, now in his early fifties, commands a daz- zling painterly technique. Although briefly a student of Joseph Beuys (who called Ner- drum's 1981 painting 'Twilight' the 'most radical' work he had ever seen), Nerdrum's formative inspiration comes from Rem- brandt and Caravaggio.

I know that is a large claim. And I know, too, that at a time when corporate decora- tors like Frank Stella claim Caravaggio as a precursor, it doesn't necessarily mean very much. Unlike Stella, however, Nerdrum has absorbed Caravaggio and Rembrandt down to his fingertips. The Pharisee 'old-master technique' is bandied about like a shuttle- cock these days. Abattoir painters like Francis Bacon and wax-works specialists like Lucian Freud are always being praised for their 'old master technique'. But their efforts are crudity itself in comparison to Nerdrum's masterly compositions. 'The Old Masters are my guides,' he said in 1967, `nature is my God.' He really meant it.

Nerdrum outdoes Bacon and Freud in other respects, too. Like many celebrated contemporary artists, Bacon and Freud enjoy their exalted reputations partly because of their unpleasant subject matter. Screaming pontiffs and cadaverous skin appeal greatly to anxious philistines eager to impress themselves. As some paintings of his family demonstrate, Nerdrum is capable of producing tender, sunny work. But his signature pieces are mythic tableaux — piti- less elemental allegories — that make Bacon's and Freud's paintings seem like something out of Currier and Ives. Many of Nerdrum's recent paintings combine subject matter as horrifying as anything in Goya's `Disasters of War' with an artistic mastery of unsurpassed sumptuousness. If Ner- drum's manner is traditionalist, his matter is something else entirely. As the critic Richard Vine put it, `Nerdrum's technique is indeed highly civilised, but his content is sheer atavism.' It takes only a glance at his work to see why Scandinavian critics speak of 'the Odd Nerdrum Phenomenon'.

Nerdrum's career is generally divided into two phases. In the first, which lasted from the mid-1960s until the early 1980s, he specialised in a kind of radical social commentary: stunningly naturalistic paint- ings typified by the sexually-explicit 'Liber- ation' (1974), 'The Murder of Andreas Baader' (1977-1978), and 'Refugees at Sea' (1979), a large canvas memorialising Viet- namese 'boat people'. In such works, Ner- drum pursued a melodramatic emancipatory vision informed by the anar- chist politics of the 1960s.

His work underwent a profound change around 1983. His palette and sensibility suddenly became darker, less topical, more enigmatic. The ten paintings on view at the Forum Gallery epitomise this phase of Nerdrum's career. Painting in a reddish- brown wash of Rembrandtesque tenebrism, Nerdrum populates placeless, desolate landscapes with hieratic figures torn from a world of implacable ritual and retribution. `Release' (1966), which depicts a bare- backed man busily digging a hole to bury alive a terrified woman, is about midway up the scale of Nerdrum's creepiness. The possibility that the man is doing her a favour — that the 'release' in question is release from the terror of life itself — is a typical Nerdrum accessory.

It is curious that Odd Nerdrum's work has not been exhibited (as far as I can dis- cover) in England. His hermaphrodites and maimed bodies seem just the thing to tickle the Turner Prize/Hayward Gallery crowd. Perhaps his apocalyptic anti-modernism is just too much for people who think that bisecting cattle is a radical artistic gesture. Or perhaps Nerdrum's staggenng technical facility counts against him among the aes- thetically handicapped. I cannot really say that I am happy to have encountered Odd Nerdrum's work. I know, however, that I shall never forget it.

Roger Kimball is managing editor of the New Criterion.