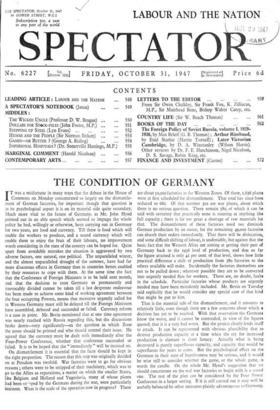 THE CONDITION OF GERMANY

IT was a misfortune in many ways that the debate in the House of Commons on Monday concentrated so largely on the dismantle- ment of German factories, for important though that question is in its psychological aspect it is on its material side quite secondary. Much more vital to the future of Germany, as Mr. John Hynd pointed out in an able speech which seemed to impugn the whole policy he had, willingly or otherwise, been carrying out in Germany for two years, are food and currency. Till there is food which will enable the workers to produce, and a sound currency which will enable them to enjoy the fruit of their labours, no improvement worth considering in the state of the country can be hoped for. Quite apart from avoidable mistakes the situation is aggravated by two adverse factors, one natural, one political. The unparalleled winter, and the almost unparalleled drought of the summer, have had far more disastrous effects in Germany than in countries better, enabled by their resources to cope with them. At the same time the fact that the Conference of Foreign Ministers is to be held next month, and that the decision to treat Germany as permanently and irrevocably divided cannot be taken till a last desperate endeavour has been made to achieve some kind of working agreement between the four occupying Powers, means that measures urgently called for in Western Germany must still be delayed till the Foreign Ministers have assembled, debated and succeeded or failed. Currency reform is a case in point. Mr. Bevin mentioned that at one time agreement was nearly reached with Russia regarding this, but the discussions broke down—very significantly—on the question in which Zone the notes should be.printed and who should control their issue. He agreed that the currency must be dealt with immediately after the Four-Power Conference, whether that conference succeeded or failed. It is to be hoped that the " immediately " will be insisted on.

On dismantlement it is essential that the facts should be kept in the right proportion. The reason that this step was originally decided on at Potsdam was twofold. War factories were to go for obvious reasons ; others were to be stripped of their machinery, which was to go to the Allies as reparations, a matter on which the smaller States, like Belgium and Holland and Yugoslavia, many of whose plants had been str'oped by the Germans during the war, were particularly insistent. What is the scale of the operation now in progress? There

are about 5o,000 factories in the Western Zones. Of these, 1,636 plants were at first scheduled for dismantlement. That total has since been reduced to 682. Of that number 302 are war plants, about which there is no serious question. There remain 380, of which it can be said with certainty that practically none is running at anything like full capacity ; there is far too great a shortage of raw materials for that. The dismantlement of these factories need not diminish German production by an ounce, for the remaining 49,000 factories can absorb their orders immediately. That there will be dislocation, and some difficult shifting of labour, is undeniable, but against that the basic-fact that the Western Allies are aiming at getting their part of Germany back to the 1936 level of production, and that so far the figure attained is only 42 per cent, of that level, shows how little practical difference a shift of production from 380 factories to the others available will make. Incidentally the factories themselves are not to be pulled down ; wherever possible they are to be converted into urgently needed flats for workers. There are, no doubt, faults in the schedule. Particular factories whose products are urgently needed may have been mistakenly included. Mr. Bevin on Tuesday said explicitly that he would consider any special case of that kind that might be put to him.

That is the material side of the dismantlement, and it amounts to relatively little, even though there are a few concerns about which a decision has yet to be reached. With that reservation the Germans know the worst, and it cannot be contended, in view of the figures quoted, that it is a very bad worst. But the project clearly lends itself to attack. It can be represented with obvious plausibility that to destroy productive capacity at a time when the cry for increased production is clamant is sheer lunacy. Actually what is being destroyed is purely superfluous capacity, and capacity that would be superfluous for years to come. But the psychological effect on the Germans in their state of hopelessness may be serious, and it would be wise still to consider whether the game, or the whole game, is worth the candle. On the whole Mr. Hynd's suggestion that we should concentrate on the real war factories to begin with is a sound one. The rest of the plan can be considered by the Four Power Conference in a larger setting. If it is still carried out it may well ba usefully balanced by other measures plainly advantageous to Germany.