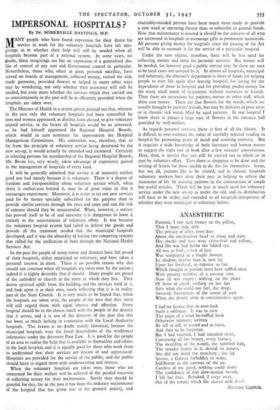 MANY people who- have found expression for their desire for service in work for the voluntary hospitals have felt mis- givings as to whether their help will still be needed when all hospitals become part of a national system. In some cases, no doubt, these misgivings are but an expression of a generalised dis- like of control of any sort and Government control in particular. Nevertheless, those who, often at great personal sacrifice, have served on boards of management, collected money, visited the sick, made garments, provided flowers or helped in many other ways may be wondering, not only whether their assistance will still be needed, but even more whether the services which they carried out so conscientiously in the past will be as efficiently provided when the hospitals are taken over.

The Minister of Health in a recent speech pointed out that, whereas in the past only the voluntary hospitals had been controlled by men and women appointed, as distinct from elected, to give voluntary unpaid service, in the future all hospitals would be so governed, as he had himself appointed the Regional Hospital Boards, which would in turn nominate for appointment the Hospital Management Committees. His contention was, therefore, that so far from the principle of voluntary service being destroyed by the new set-up, it would actually be extended and increased. Certainly in selecting persons for membership of the Regional Hospital Boards, Mr. Bevan has, very wisely, taken advantage of experience gained in the management of hospitals of every kind.

It will be generally admitted that service is of necessity neither good nor bad merely because it is voluntary. There is a degree of freedom and irresponsibility about voluntary service which, when there is enthusiasm behind it, may be of great value in that it encourages experiment. Moreover, it is easier to try out new services paid for by money specially subscribed for the purpose than to provide similar services through the rates and taxes and run the risk of censure should they be unsuccessful. When, however, a service has proved itself to be of real necessity it is dangerous to leave it entirely to the uncertainties of voluntary effort. It was because the voluntary hospital system had failed to deliver the goods and provide all the treatment needed that the municipal hospitals developed, and it was the absurdity of having two competing systems that called for the unification of both through the National Health Services Act.

In the past the people of many towns and districts have felt proud of their hospitals, either municipal or voluntary, and have taken a personal interest in them. There is no possible reason why this should not continue when all hospitals are taken over by the nation ; indeed it is highly desirable that if should. Many people are proud of the cathedral or church in the town in which they live. They derive spiritual uplift from the building and the services held in it, and look upon it as their own, rarely reflecting that it is in reality part of the State Church. It is very much to be hoped that, when the hospitals are taken over, the people of the area that they serve will still regard them with equal interest and affection. Every hospital should be in the closest touch with the people of the district that it serves, and it is one of the disasters of the past that this has been so much lacking in connection with the Local Authority hospitals. The reason is no doubt mainly historical, because the municipal hospitals were the lineal descendants of the workhouse infirmaries under the deterrent Poor Law. It is good for the people of an area to realise the help that is available to themselves and others in the local hospital, and it is equally good for those who work there to understand that their services are known of and appreciated. Hospitals are provided for the service of the public, and the public should learn to regard them with understanding and interest.

When the voluntary hospitals are taken over, those who are concerned for their welfare will be relieved of the painful necessity of colleCtimg money for their maintenance. Surely they should be grateful for this, for in the past it has been the ordinary maintenance of the hospital that has given rise to the greatest anxiety, and charitably-minded persons have been much more ready to provide a new ward or operating theatre than to subscribe to general funds. Now that maintenance is assured it should be the concern of all who are interested in hospitals to encourage gifts as permanent memorials. All persons giving money for hospitals since the passing of the Act will be able to earmark it for the service of a particular hospital.

Under the new regime, therefore, there will be less need for collecting money and more for personal services. But money will be needed, for however good a public service may be there are sure to be hard cases not covered by it. In almost all hospitals, municipal and voluntary, the almoner's department is short of funds for helping people to start life again after leaving hospital, for caring for the dependants of those in hospital and for providing pocket-money for the many small needs of in-patients without resources or friends. Then there are recreations for patients, nurses or other staff, which often cost money. There are also flowers for the wards, which are usually brought by patients' friends, but may be deficient in poor areas or in chronic sick wards filled by aged patients. In one hospital I know there is always a large vase of flowers in the entrance hall provided by well-wishers.

As regards personal services, there is first of all the library. It is difficult to over-estimate the value of carefully selected reading in hospital for promoting peace of mind and assisting recovery. But it requires a wide knowledge of both literature and human nature to suggest the right sort of book after a few minutes' conversation. Here, then, is service that can still be carried out in whole, or in part by voluntary effort. Then there is shopping to be done and the writing of letters for those unable to do this for themselves. Some, but not all, patients like to be visited, and in chronic hospitals voluntary workers have done their part in helping to relieve the monotony of life by assisting patients in the construction of simple but useful articles. There will be just as much need for voluntary service under the new set-up as under the old, and its distribution will have to be wider, and extended to all hospitals irrespective of whether they were municipal or voluntary before.