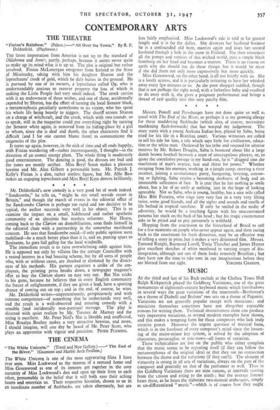 "The White Unicorn." (Tivoli and New Gallery.) " The End of the River." '(Gaumont and Marble Arch Pavilion.) The White Unicorn is one of the most aggravating films I have ever seen. Miss Lockwood as the matron of a remand home and Miss Greenwood as one of its inmates get together in the cosy austerity of Miss Lodtwood's den and open up their lives to each other, presumably in the belief that it will both ease their aching hearts and entertain us. Their respective histories, shown to us in an inordinate number of flashbacks, are taken alternately, but are

less. fairly emphasised. Miss Lockwood's tale is told at far greater length and it is far the duller. She divorces her husband because he is a confounded old bore, marries again and loses her. second husband through a hole in the snow in Finland. She then renounces all the pomps and vanities of this wicked world, puts a simple black homburg on her head and becomes a matron. There is no reason on earth why she should not do these things, but it would be nicer if she did them not only more expressively but more quickly.

Miss Greenwood, on the other hand, is all too briefly with us. She is a lovely actress, and it is particularly irritating to have her whisked away every few minutes or so. As the poor shopgirl saddled, though that is not perhaps the right word, with a fatherless baby and resolved to do away with it, she gives a poignant performance and brings a thread of real quality into this very patchy film.

Messrs. Powell and Pressburger have not done quite so well as usual with The End of the River, or perhaps it is my growing allergy for these maddening flashbacks (which also, of course, necessitate maddening flash-forwards) that has warped my judgement. The story starts with a young Arekuna Indian boy, played by Sabu, being tried for his life in a Brazilian court. Various witnesses are called to tell his tale for him, a tale which says little for civilisation, educa- tion or the white man. Outlawed by his tribe and rescued for ulterior motives by Mr. Robert Douglas, Sabu is bounced about like a large dumb brown football between a team of unscrupulous players, or, to quote the correlative passage in my hand-out, he is "dragged into the maelstrom of man's avarice, lust and thirst for power." Whether escaping from his enemies, working in a jungle camp, steering a river steamer, joining a revolutionary party, hungering, fevering, sorrow- ing or fighting, Sabu retains a becoming sleekness of body and an immutable sullenness of face. It is true that he has nothing to smile about, but a lot of us smile at nothing, just in the hope of looking agreeable. Not so Sabu, who is young, healthy, has a nice wife called Miss Bibi Ferreira, who sings very very fast in a very very lilting voice, some good friends, and all the sights and sounds and smells of life bathed in tropical sunshine. If only he smiled in the midst of adversity, he would be a touching figure with his unaccustomed panama hat stuck on the back of his head ; but his tragic countenance asks to be pitied and so pity perversely is withheld.

Hopping from the courtroom to the hinterland of Brazil to call for a few moments on people who never appear again, and then racing back to the courtroom for fresh directives, may be an effective way of telling a story in print, but it makes a very disjointed film. Messrs. Esmond Knight, Raymond Lovell, Torin Thatcher and James Hayter give excellent sketches of white manhood in varying stages of dis- integration, although not one of them looks remotely Brazilian ; but they have not the time to take root in our imaginations before they