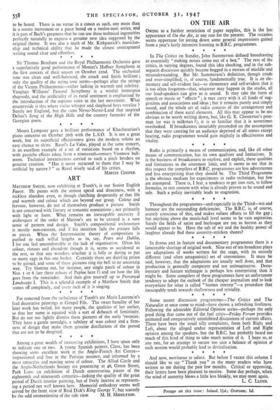 OWING to a further restriction of paper supplies, this is the last appearance of On the Air, at any rate for the present. The occasion seems opportune for jotting down some general impressions gained from a year's fairly intensive listening to B.B.C. programmes.

* * In The Critics on Sunday, John Suttunerson defined broadcasting as essentially "making noises come out of a box." The rest of the critics, in varying degrees, found this idea shocking, and in the sub- sequent discussion quickly became bogged in a morass of mliddleand misunderstanding. But Mr. Summerson's definition, though crude and over-simplified, is, of course, fundamentally true. It is an ele- mentary and self-evident fact—so elementary and self-evident that it is too often forgotten—that, whatever may happen in the studio, all our loud-speakers can give us is sound. It may take the form of speech or music or " effects " ; it may carry with it all kinds of sug- gestions and associations and ideas ; but it remains purely and simply sound, and the whole art of radio consists of the arrangement and combination of these aural elements. All this may appear to be too obvious to be worth writing down, but, like G. K. Chesterton's post- man (or was it milkman ?), it is so familiar that it is sometimes overlooked. If broadcasters invariably proceeded on the assumption that they were catering for an audience deprived of all senses except hearing, radio programmes would gain mightily in effectiveness and

vitality. • * * * Radio is primarily a means of communication, and, like all other means of communication, has its own qualities and limitations. It is the business of broadcasters to explore, and exploit, these qualities and limitations to the uttermost limit, and it seems to me that in this respect the compilers of B.B.C. programmes are less adventurous and less enterprising than they should be. The Third Programme is the obvious medium for experiments in radio technique, but few are attempted. There is, I fear, a tendency to get into ruts, to follow formulas, to rest content with what is already proven to be sound and safe. Such a policy inevitably leads to stagnation.

* * * * Throughout the programmes—and especially in the Third—wit and humour are the outstanding deficiencies. The B.B.C. is, of course, acutely conscious of this, and makes valiant efforts to fill the gap ; but anything above the music-hall level seems to be vain aspiration. Surely the fields of satire and burlesque are not as barren as they would appear to be. Have the salt of wit and the healthy power of laughter already fled these austerity-stricken shores?

* * In drama and in feature and documentary programmes there is a lamentable shortage of original work. Nine out of ten broadcast plays are adaptations of works written for the stage, with its entirely different (and often antagonistic) set of conventions. It must be said, however, that the adaptations are usually well done, and that production is generally competent and not unimaginative. Docu- mentary and feature technique is perhaps less enterprising than it might be. Some compilers of these programmes have an unfortunate tendency to adopt the outlook of the cheaper journalism and to look everywhere for what is called "human interest "—a procedure that inescapably tends towards shallowness and triviality.

• * * * Some recent discussion programmes—The Critics and The Naturalist at once come to mind—have shown a refreshing liveliness. Following the admirable Editorial Opinion series—perhaps the only good thing that came out of the fuel crisis—Friday Forum provides animated and comparatively uninhibited discussions of current affairs. There have been the usual silly complaints, from both Right and Left, about the alleged undue representation of Left and Right opinion among the speakers, but the B.B.C. has probably heard too much of this kind of thing to take much notice of it. I hope so, at any rate, for an attempt to secure too nice a balance of opinion at each session would probably lead to devitalisation.

* * * * And now, moriturus te saluto. But before I vacate this column I should like to say "Thank you" to the many readers who have written to me during the past few months. Critical or approving, their letters have been pleasant to receive. Some day perhaps, when the wind of austerity blows a little less bleakly, we may meet again.