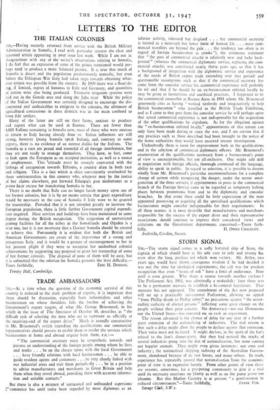 TRADE AMBASSADORS Sta,—At a time when the question of the

economic survival of this country is reduced to the stark problem of exports, it is important that there should be discussion, especially from industrialists and other businessmen on whose shoulders falls the burden of achieving the Government's export targets, of what Mr. George Brinsmead, in his article in the issue of The Spectator of October 10, describes as "the difficult task of selecting the men who are to represent us officially at the receiving-end of the export drive." Much is soundly constructive in Mr. Brinsmead's article regarding the qualifications our commercial representatives should possess to enable them to render the services which businessmen at home and abroad require from them, e.g.:—

"The commercial secretary must be sympathetic towards and • possess an understanding of the foreign people among whom he lives and works . . . be on the closest terms with the local Government . . . have friendly relations with local businessmen . . . be able to guide resident agents and customers . be very closely linked with our industrial areas and visit them periodically . . . be in a position to advise manufacturers and merchants in Great Britain and help them when they travel abroad, providing them with accurate informa- tion and suitable contacts."

inferior activity, tolerated but despised . . . the commercial secretary' is treated as a necessaiy but lower form of human life . . . mere corn- mercial travellers are beyond the pale . the tendency too often is to regard all foreign businessmen as crooks "), the erroneous statement that " the post of commercial attaché is relatively new and lacks back- ground " (whereas the commercial diplomatic service, replacing the com- mercial attaché, was constituted nearly thirty years ago, so that it has a background of integration with the diplomatic service and experience of the needs of British export trade extending over that period) and questionable assumptions such as that if the commercial secretary has come from the consular service. his commercial experience will probably be nil and that if he should be an ex-businessman enlisted locally he may be given to favouritism and unethical practices. I happened to be the commercial counsellor at Buenos Aires in 1931 whom Mr. Brinsmead generously cites as having "worked tirelessly and imaginatively to help British businessmen" who travelled to the British Trade Exhibition, and as I came to that post from the consular service he will perhaps agree that actual commercial experience is not indispensable for the acquisition of the other qualifications he stipulates. As for the allegation against the "ex-businessman enlisted locally," appointments of this nature can only have been made during or since the war, and I am certain that if any practices such as those described had been brought to the notice of the home authorities they would have received instant investigation.

Undoubtedly there is room for improvement both in the qualifications and in the selection of commercial diplomatic officers. Mr. Brinsmead's enumeration of thc qualifications necessary from a businessman's point of view is unexceptionable, but not all-inclusive. One might add skill in negotiation with foreign officials, thorough command of the language, ability to speak in public. In regard to selection, it is possible to dissent wholly from Mr. Brinsmead's particular recommendations for a complete change of system while recognising the danger, under the recent amal- gamation of the three services, if appointments to posts in the commercial branch of the Foreign Service came to be regarded as temporary halting places between promotions from and to the diplomatic and consular branches. In that event there could be little expectation of the men appointed possessing or acquiring all the specialised qualifications which businessmen might consider indispensable for their requirements. In all these matters it is most desirable that manufacturers and merchants responsible for the success of the export drive and their representative associations should continue to impress their considered views and criticisms on the Government departments concerned.—Yours faith-