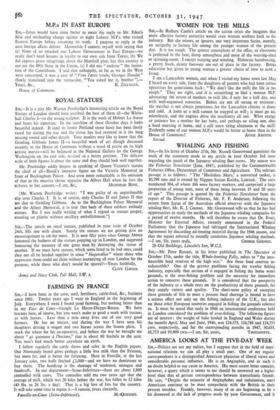 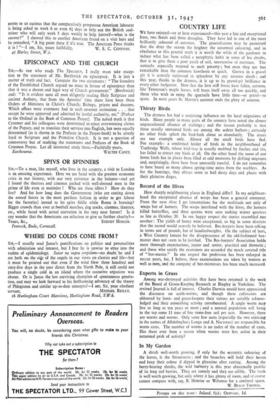 AMERICA LOOKS AT THE FIVE-DAY WEEK

Sta,—Politics are not my metier, but I suppose that in the field of inter- national relations we can all play a small part. One of my regular correspondents is a distinguished American physician of liberal views and considerable personal influence. He is an Anglophile, and as such is no doubt helpful to our cause in America. His most recent letter contains, however, a query which it seems to me should be answered on a higher level than that of private correspondence between transatlantic friends. He says, "Despite the minority of Anglophobes and isolationists, most Americans continue to be niost sympathetic with the British in their present troubles. Frankly, however, many of us are beginning to be a bit dismayed at the lack of progress made by your Government, and it seems to us curious that the comr5aratively prosperous American labourer is being asked to work 6 or even 61 days to help out the British coal- miner who will only work 5 days weekly to help himself—what is the answer?" I showed this to another American friend on a visit here and he remarked, "A big point there if it's it is ! "—I am, Sir, yours faithfully, 41 Harley Street, W.r.