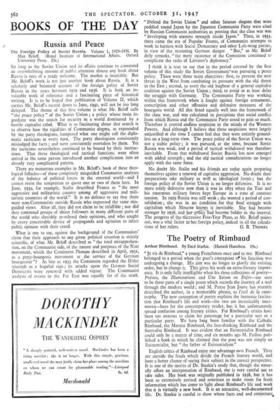 So long as the Soviet Union and its affairs continue to command an overwhelming amount of public attention almost any book about Russia is sure of a ready welcome. The market is insatiable. But Mr. Setoff's work is not just another book about Russia. It is a scholarly and balanced account of the foreign policy of Soviet Russia in the years between 1929 and 1936. It is both an in- valuable work of reference and a fascinating piece of historical writing. It is to be hoped that publication of Volume II, which carries Mr. Setoff's record down to June, 1941, will not be too long delayed. The theme of this first volume is what Mr. Setoff calls "the peace policy" of the Soviet Union ; a policy whose main in- gredient was the search for security in a world dominated by a hostile capitalist cabal. What is so fascinating about that search is to observe how the rigidities of Communist dogma, as expounded by the party theologians, hampered what one might call the diplo- matic tacticians at every turn. The party theologians consistently misjudged the facts ; and were consistently overtaken by them. Yet the tacticians nevertheless continued to be bound by their instruc- tions. That these theological and tactical functions were often united in the same person introduced another complication into an already very complicated pattern.

There are numerous examples in Mr. Setoff's book of these theo- logical fallacies—of these completely misguided Communist analyses of the balance of political forces in the external world—and I cannot resist the temptation to quote one or two of them here. In June, 1930, for example, Stalin described France as "the most aggressive and militaristic country among all aggressive and mili- taristic countries of the world." It is no defence to say that there were non-Communists outside Russia who expressed the same mis- guided views. After all, they did not claim to be infallible ; nor did they command groups of abject followers in many different parts of the world who slavishly re-echoed their opinions, and who sought by every conceivable device of propaganda and agitation to infect public opinion with their creed.

What is one to say, against the background of the Communists' claim that their approach to any given political situation is strictly scientific, of what Mr. Setoff described as "the total misapprehen- sion, on the Communist side, of the nature and purposes of the Nazi movement, which the Comintern Plenum described in April, 1931, as a petty-bourgeois movement at the service of the German bourgeoisie "? As late as 1933 the Comintern regarded the Hitler triumph as a hopeful sign ; its attacks upon the German Social Democrats were renewed with added vigour. The Communist analysis of events in the Far East was equally far of the mark. "Defend the Soviet Union" and other fatuous slogans that were peddled round Japan by the Japanese Communist Party were cited by Russian Communist authorities as proving that the class war was "developing with massive strength inside Japan." Then, in 1935, there came the era of Popular Fronts, of Communist attempts to work in harness with Social Democracy and other Left-wing parties, in view of the mounting German danger. "But," as Mr. Setoff drily remarks, "the mere existence of the Comintern continued to complicate the tasks of Litvinov's diplomacy."

I think it is true to say that in the period covered by the first volume of this study the Soviet Government was pursuing a peace policy. There were three main objectives: first, to prevent the new threat in the West from combining its pressure with the old threat in the East ; second, to avert the old bugbear of a general capitalist coalition against the Soviet Union ; third, to avoid or at least delay the struggle with Germany. The Communist Party was working within this framework when it fought against foreign armaments, conscription and other offensive and defensive measures of the bourgeois world. All this fitted equally well into the framework of the class war, and was calculated to precipitate that social conflict from which Russia and the Communist Party stood to gain so much. Therefore it created endless suspicion in the minds of the Western Powers. And although I believe that these suspicions were largely unjustified at the time I cannot feel that they were entirely ground- less on a long-term view. The peace policy of the Soviet Union was not a stable policy • it was pursued, at the time, because Soviet Russia was weak, an a period of tactical withdrawal was therefore inevitable. From that withdrawal Soviet Russia has now emerged with added strength ; and the old tactical considerations no longer apply with the same force.

No doubt Mr. Stalin and his friends are today again preparing themselves against a renewal of capitalist aggression. No doubt their preparations take military as well as ideological forms ; but the foreign policy of the Soviet Union is no longer defensive. It is no more solely defensive now than it was in 1815 when the Tsar and his enormous military forces kept Europe in a state of constant tension. In 1929 Russia was still weak ; she wanted a period of con- solidation; she was in. no condition for that final struggle with capitalism which Moscow knows is inevitable. She had become stronger by 1936, and *.r-pnlic3-7fiad become bolder in the interval. The progress of th,e-tuccessive Five-Year Plans, as Mr. Setoff points out, was a vital factor in-her foreign policy, indeed in all the calcula-