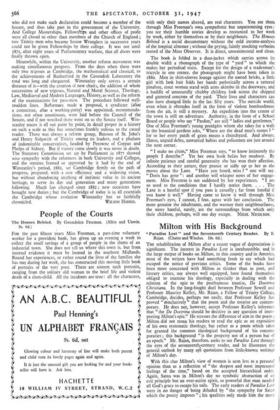 People of the Courts

FOR the past fifteen years Miss Freeman, a part-time voluntary worker for a provident bank, has given up an evening a week to collect the small savings of a group of people in the slums of an industrial town. She does not tell us where this town is, but from internal evidence it must be located in the southern Midlands. Round her experiences, or rather round the lives of the families she has met during her work, she has constructed this moving little book of portraits of the very poor. There are sixteen such portraits, ranging from the solitary old woman to the brief life and violent death of a slum-child. All the incidents are true : all the characters, with only their names altered, are real characters. You see them through Miss Freeman's own sympathetic but unpatronising eyes: you see their humble stories develop as recounted to her week by week, either by themselves or by their neighbours. The Houses Behind is a social documentary without the cold income-analysis of the hospital almoner ; without the prying, faintly mocking verbatim record of the Mass Observer. It is direct, unsentimental and clean.

The book is folded in a dust-jacket which carries across its double width a photograph of the type of " yard " to which she makes her periodical visits. Except for the design of a tradesman's tricycle in one corner, the photograph might have been taken in 1880. Men in shirt-sleeves lounge against the sooted bricks, a little girl with lank hair folds her hands pathetically across a tattered pinafore, stout women stand with arms akimbo in the doorways, and a huddle of unnaturally chubby children look across the chipped and guttered concrete of the yard. Their lives and characters can also have changed little in the las; fifty years. The outside world, even when it obtrudes itself in the form of violent bombardment from the air, is still a mystery. An expedition into the centre of the town is still an adventure. Authority, in the form of a School Board or people who say "Pardon," are still "ladies and gentlemen." One of Miss Freeman's young protegees whom she takes for a walk in the botanical gardens asks, "Where are the dead men's stones ? " for to her every patch of grass means a churchyard. And always, illness, unpaid debts, unwanied babies and policemen are just around the next corner.

"I make no claim," Miss Freeman says, "to know intimately the people I describe." Yet her own book belies her modesty. By infinite patience and careful generosity she has won their affection. According to their nature, they prance or sidle up to her as she moves about the Lane. "Have you heard, miss ? " one will say. "Doris has gone ": and another will whisper news of her engage- ment. Miss Freeman is not saddened by her experiences. "I am so used to the conditions that I hardly notice them. . . . The Lane is a hateful spot if you pass it casually ; far from hateful if you know it well." Having come to know it well through Miss Freeman's eyes, I cannot, I fear, agree with her conclusion. The more genuine the inhabitants, and the warmer their neighbourliness, the more hateful, surely, are the surroundings from which only their children, perhaps, will one day escape. NIGEL NICOLSON.