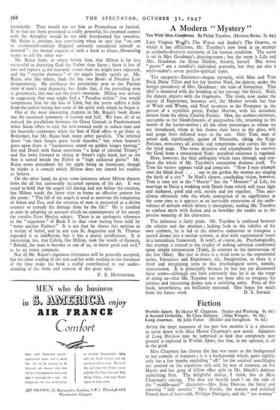 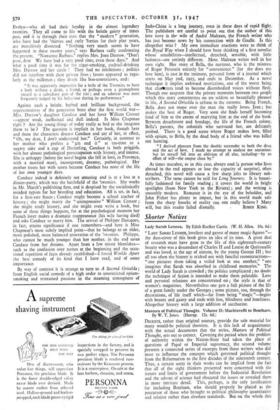 AFTER the inept nonsense of the past few months it is a pleasure to settle down with Miss Hester Chaptnan's new novel. Admirers of Long Division may be surprised to find that completely new ground is explored in Worlds Apart, but that, in my opinion, is all to the good.

Miss Chapman has chosen the late war years as the background to her comedy of manners ; it is a background which, quite rightly, only has a few bombs exploding "off," for the satirical searchlights are centred on the expatriate rich and, by way of contrast, on Ivy Harris and her gang of fellow office girls in Mr. March's dubious publishing firm. The delightful malice, I think, lies in Miss Chaprnan's casting. The dice are heavily loath' i on the side of the " middle-aged " characters—Mrs. Joan Darrow, the bitter and amusing "lady novelist" Mrs. Fraske, the mature and polished French hero of forty-odd, Philippe Darcques, and the "yes woman"

Evelyn—who all had their heyday in the almost legendary twenties. They all come to life with the brittle gaiety of times past, and it is through their eyes that the " modern " generation, who have had the 'thirties and early 'forties for their play years, are mercilessly dissected. "Nothing very much seems to have happened in these twenty years," says Barbara sadly confronting the present. "Nonsense Barbara," replies Mrs. Joan Darrow; "Don't pose, dear. We have had a very good time, even these days." And what a good time it was for the cigar-smoking, cocktail-drinking Mrs. Darrow and her circle I They had no inhibitions ; politics did not interfere with their private lives ; lovers appeared as regu- lady as the milkmen ; they drank like boa-constrictors, and: "It was apparently impossible for a belle of the Twenties. to have a bath without a drink, a friend, or perhaps even a gramophone record as a subsidiary part of the rite ; and an admirer was most frequently judged by his behaviour during its performance."

Against such a brittle, barbed and brilliant background, the representatives of the generation born after the first world war— Mrs. Darrow's daughter Candace and her lover William Cresser —appear weak, ineffectual and dull indeed. Is Miss Chapman right ? Are the young things of today really as bad as she imagines them to be ? The question is implicit in her book, though here and there the characters discuss Candace and say of her, in effect, "Oh, my dear, I don't understand her." Certainly, in contrast to her mother who prefers a "gin and it" at tea-time to a sugary cake and a cup of Darjeeling, Candace is both priggish, with her almost pathological preoccupation with history, and intense. She. is unhappy (before the novel begins she fell in love, in Provence, with a married man), incompetent, dreamy, pathological. Her mother treats her with scorn because Candace has none of the life of her own younger days.

Candace indeed is definitely not amusing and is at a loss at a dinner-party, which was the battlefield of the 'twenties. She works in Mr. March's publishing firm, and is despised by the socialistically minded typists for her breeding and education. All is set, in fact, for a first-rate fiasco ; Candace might become a school teacher of history ; she might marry the " unimpressive " William Cresser ; she might study history, and she might even write a book, but none of these things happens, for at the psychological moment her French lover makes a dramatic reappearance (his wife having died) and asks Candace to marry him. The arrival of Philippe Darcques, in fact, attains significance if one remembers—and here is Miss Chapman's most subtly implied point—that he belongs to an older, more polished, more balanced generation of the 'twenties. Philippe, who cannot be much younger than her mother, in the end saves Candace from her dreams. Apart from a few minor blemishes-- such as the confusion over names at the beginning and the occa- sional repetition of facts already established—I found Worlds Apart the best comedy of its kind that I have read, and of some importance.

By way of contrast it is strange to turn to A Second Griselda ; from English social comedy of a high order to unrestricted opium- smoking and restrained passions in the steaming atmosphere of Indo-China is a long journey, even in these days of rapid flight. The publishers are careful to point out that the author of this love story is the wife of Andre Malraux, the French writer who has just become news by his connection with de Gaulle. Is this altogether Wise? My own immediate reactions were to think of the Royal Way when I should have been thinking of a first novelist whose sensibilities—intellectual, detached, sensible, with little lushness—are entirely different. Mme. Malraux writes well in her own right. Her story of Bella, the narrator, who is the mistress of Roger Perrouin entirely for "convenience" (for she does not love him), is cast in the intimate, personal form of a journal which starts on May 2nd, 1925, and ends in December. As a novel technique it implies awkward restrictions one of the worst being that chatecters tend to become disembodied voices without flesh. Though one suspects that the private moments between two people which this story concentrates on are seldom so beautifully phrased in life, A Second Griselda is urbane in the extreme. Being French, Bella does not mope over the man she really loves, Jean ; but makes the best of Roger. Very soon she finds herself becoming fond of him to the extent of marrying him at the end of the book. Between detachment and bondage, the life of the French colony, Bella's parents, the colonials who surround her, are delicately probed. There is a good scene where Roger makes love, filled with opium, to Bella, by the dead body of a friend who was killed out hunting.

"I derived pleasure from the double surrender to both the drug and the act of love. I made no attempt to analyse my sensations but let myself fall into an oblivion of all else, including—by an effort of will—the corpse close by."

At times macabre, as in this case, always cool (a person who lives abroad in the end appears to lose the capacity of surprise), often detached, this novel will cause a few sharp jolts to library sub- scribers. The same cannot be said for Long lourney. It is beauti- fully fashioned for family reading ; it covers the world in bright spotlights (from New York to the Riviera)' and the writing is smoothly modern. Romance is in the eye of the beholder, and John Fisher has plenty to impart, but in this world made safe from the sharp knocks ot reality can one really believe ? Many will, but this reader failed dismally. ROBIN KING.