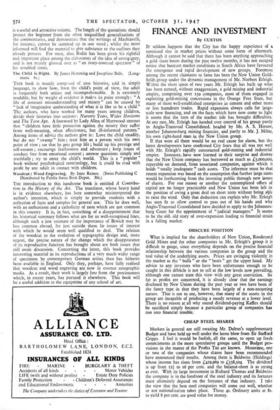 By CUSTOS IT seldom happens that the City has the happy experience of sustained rise in market prices without some form of aftermath. Although it cannot be said that there has been anything approaching a gold share boom during the past twelve months it has not escaped notice that buoyant market conditions in South Africa have favoured the emergence and rapid development of new groups. Foremost among the recent claimants to fame has been the New Union Gold- fields group under the dynamic management of Mr. Norbert Erleigh. Within the short space of two years Mr. Erleigh has built up what has been termed, without exaggeration, a gold mining and industrial empire, comprising. over 15o companies most of them engaged in exploiting gold-mining concessions in the Orange Free State, but many of them well-established enterprises in cement and other more or less humdrum 'trades. Rapid expansion always calls for large- scale new financing, and on the facts which have now come to light it seems that the turn of the market tide has brought difficulties. At any rate, Mr. Erleigh has handed over control of his group partly to Anglo-Transvaal Consolidated, healed by Mr. A. S. Hersov, another Johannesburg mining financier, and partly to Mr. J. Milne, his own right-hand man in the New Union group.

If that were all there would be no real cause for alarm, but the latest developments have confirmed City fears that all was not well with Mr. Erleigh's rapidly constructed gold-mining and industrial empire. Investors have now learned to their surprise and dismay that the New Union company has borrowed as much as £5,000,000, repayable on demand, from associated companies, against which it holds "totally inadequate" cash assets. The inference must be that recent expansion was based on the assumption that further large sums would be forthcoming from the investing public through new issues of shares. For one reason or another the contemplated offers of capital are no longer practicable and New Union has been left in the position of owing a great deal on short term without being Ole to raise the wind. Only that deduction can explain why Mr. Erleigh has seen fit to allow control to pass out of his hands and why Anglo-Transvaal Consolidated have decided to apply to the Johannes- burg Court for the appointment of "judicial managers." It seems to be the old, old story of over-expansion leading to financial strain in a falling market OBSCURE POSITION

What is implied for the shareholders of New Union, Rooderand Gold Mines and the other companies in Mr. Erleigh's group it is difficult to gauge, since everything depends on the precise financial relationship between the various companies in the group and the real value of the underlying assets. Prices are swinging violently in the market as the " bulls " or the " bears " get the upper hand. My advice to any investors who have been unfortunate -enough to be caught in this debacle is not to sell at the low levels now prevailing, although one cannot state this view with any great conviction. So far as profits are concerned, it is already clear that the earnings disclosed by New Union during the past year or two have been of the fancy type in that they have been largely of a non-recurring nature. That is not to say, however, that many of the assets in the group are incapable of producing a steady revenue at a lower level. There is no reason at all why sound dividend-paying Kaffirs should be sacrificed simply because a particular group of companies has run into financial trouble.

Markets in general are still awaiting Mr. Dalton's supplementary Budget and have held up well under the latest blow from Sir Stafford Cripps. I feel it would be foolish, all the same, to open up fresh. commitments in the more speculative groups until the Budget pro- visions in the matter of the Profits Tax are known. Meantime, one or two of the companies whose shares have been recommended have announced theif results. Among them is Baldwins (Holdings) whose income has risen from £429,969 to £538,504. The dividend is up from I21- to 16 per cent, and the balance-sheet is as strong as ever. With its large investment in Richard Thomas and Baldwins the company is in the forefront of the steel industry and its fortunes must ultimately depend on the fortunes of that industry. I take the view that the best steel companies will come out well, whether or not nationalisation takes place. These 43. Ordinary units at 8s. to yield 8 per cent, are good value for money.