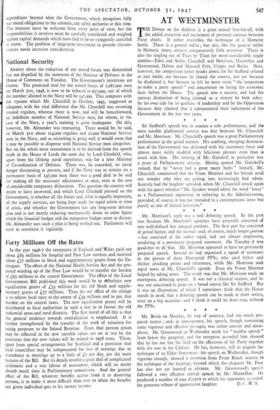 Forty Millions Off the Rates

about £57 millions in block and supplementary grants from the Ex-

chequer. The effect of the National Health Service Act and the pro- posed winding up of the Poor Law would be to transfer the burden

of 03 millions to the central Government. The effect of the Local Government Bill published this week would be to stbstitute new equalisation grants of £33 millions for the old block and supple- mentary grants of £57 millions. Thus the net effect of the change is to relieve local rates to the extent of £39 millions and to put that burden on the central taxes. The new equalisation grants will be distributed to local authorities in such a way as to favour the old industrial areas and rural districts. The first moral of all this is that the general tendency towards centralisation is emphasised. It is further strengthened by the transfer of the work of valuation for rating purposes to the Inland Revenue. Fears that present prices may be reflected in the new rateable values are set at rest by the provision that the new values will be related to 1938 costs. These, apart from special arrangements for Scotland and a provision that local councillors may be compensated for loss of earnings due to attendance at meetings up to a limit of Li per day, are the main features of the Bill. But its details involve a great deal of complicated arithmetic and a vast labour of assessment, which will no doubt absorb much time in Parliamentary committees. And the general effect of the Bill, whatever benefits accrue from it to deserving persons, is to make it more difficult than ever to relate the benefits any given individual gets to his money income.