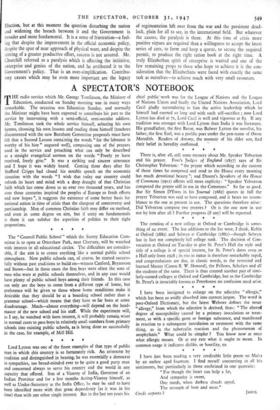 The "Council Public School" which the Surrey Education Corn- mitte,e

is to open at Ottershaw Park, near Chertsey, will be watched with interest in all educational circles. The difficulties are consider- able, if the aim is to create anything like a normal public school atmosphere. New public schools can, of course, be started success- fully without past traditions to build on—witness Canford, Bryanston and Stowe—but in those cases the first boys were often the sons of men who were at public schools themselves, and in any case would have plenty of public school boys among their friends. In this case not only are the boys to come from a different type of home, but preference will be given to those whose home conditions make it desirable that they should be at a boarding school rather than a grammar school—which means that they have so far been at some disadvantage. Much—almost everything—will depend on the head- master of the new school and his staff. While the experiment will, as I say, be watched with keen interest, it will probably remain wiser in normal cases to pass boys in relatively small numbers from primary schools into existing public schools, as is being done so successfully in the case, for example, of Mill Hill.