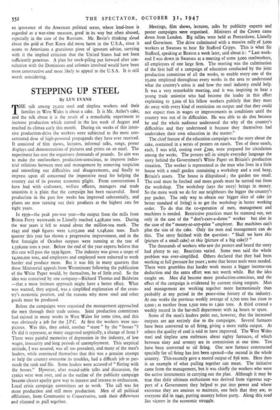 THE talk among 25,000 steel and tinplate workers and their families in West Wales is about a cake. It is Mr. Attlee's cake, and the talk about it is the result of a remarkable experiment to increase production which started in the last week of August and reached its climax early this month. During six weeks of this inten- sive production-drive the workers were subjected to the most con- centrated dose of high-powered propaganda they have ever received. It consisted of film shows, lectures, informal talks, songs, poster displays and demonstrations of pictures and prints on an easel. The experiment has cost the organisers thousands of pounds. Its aim was to make the steelworkers production-conscious, to improve indus- trial relations between men and management by removing suspicion and smoothing out difficulties and disagreements, and finally to

impress upon all concerned the imperative need for helping the country out of its present economic plight. From conversations I have had with craftsmen, welfare . officers, managers and trade unionists it is plain that the campaign has been successful. Steel production in the past few weeks has improved substantially, and plants are now turning out their products at the highest rate for eight years.

In 1939—the peak pre-war year—the output from the mills from Briton Ferry westwards to Llanelly reached 1,438,000 tons. During the war years it fell to round about the million-ton mark. The 1945 and 1946 figures were i,115,00o and 1,148,000 tons. Each quarter this year has shown a progressive improvement, and in the first fortnight of October outputs were running at the rate of 1,356,000 tons a year. Before the end of the year experts believe that this rate will pass the 1939 figure. The industry was given a target of 14,000,000 tons, and employers and employed were exhorted to work harder and produce more. But it was felt in many quarters that these Ministerial appeals from Westminster following the publication of the White Paper would, by themselves, be of little avail. So the idea was conceived by one company—Richard Thomas and l3aldwins —that a more intimate approach might have a better effect. What was wanted, they argued, was a simplified explanation of the coun- try's economic position, and the reasons why more steel and other goods must be produced.

Before the campaigns were organised the management approached the men through their trade unions. Joint production committees had existed in many works in West Wales for some time, and this was obviously a job for the J.P.C. At first the workers were sus- picious. Was this, they asked, another " stunt " by the " bosses "? Or did it represent, as many suggested sceptically, a change of front ? There were painful memories of depression in the industry, of low wages, insecurity and long periods of unemployment. This sceptical attitude, I was assured, was all too prevalent, and many of the men's leaders, while convinced themselves that this was a genuine attempt to help the country overcome its troubles, had a difficult job to per- suade the rank and file. Some leaders were accused of "flirting with the bosses." However, after round-table talks and discussion, the cynics were won over, and as the outline of the publicity campaign became clearer apathy gave way to interest and interest to enthusiasm. Local crisis campaign committees set to work. The call was for more production and still more production. Men of all political affiliations, from Communist to Conservative, sank their differences and Warmed to pull together.

Meetings, film shows, lectures, talks by publicity experts and poster campaigns were organised. Ministers of the Crown came down from London. Big rallies were held at Pontardawe, Llanelly and Gorseinon. The drive culminated with a massive rally ,of 3,000 workers at Swansea to hear Sir Stafford Cripps. This is what Sir Stafford, speaking at Buxton a week later, said about it : "Last week- end I was down in Swansea at a meeting of some 3,000 steelworkers, all employees of one large firm. The meeting was the culmination of the first half of a campaign of education conducted by the joint production committee of all the works, to enable every one of the 15,000 employed throughout every works in the area to understand what the country's crisis is and how the steel industry could help. It was a very remarkable meeting, and it was inspiring to hear a young trade unionist who had become the leader in this effort explaining to 3,000 of his fellow workers publicly that they must do away with every kind of restriction on output and that they could not expect rises in wages or improvements in conditions until the country was out of its difficulties. He was able to do that because he and the whole audience understood the why of the country's difficulties and they understood it because they themselves had undertaken their own education in the matter."

The chief feature of the education campaign was the story about the cake, contained in a series of posters on easels. Ten of these easels, each, I was told, costing over L200, were prepared for circulation among the works. The posters tell in simple everyday language the story behind the Government's White Paper on Britain's production situation. The worker is represented as the man who lives in a little house with a small garden containing a workshop and a coal heap, Britain's assets. The house is dilapidated ; the garden too small. The coal must be fetched and more goods must be turned out from the workshop. The workshop (says the story) brings in money. So the more work we do for our neighbours the bigger the country's pay packet. The only way to obtain our bigger slice of cake (or better standard of living) is to get the workshop in better working order. To do that the co-operation of men, management and machines is needed. Restrictive practices must be stamped out, not only in the case of the " don't-care-a-damn" worker but also in the case of the money-at-any-price "employer. But machines can't plan the size of the cake. Only the men and management can do this. The story finished with the question: "Shall we have this (picture of a small cake) or this (picture of a big cake)?"

The thousands of workers who saw the posters and heard the story had plenty to say. Reactions varied. Some men said the whole problem was over-simplified. Others declared that they had been working at full pressure for years ; some that better tools were needed. There were grumbles that harder work meant a bigger income-tax deduction and the extra effort was not worth while. But the idea caught on. Men did become more production-conscious, and the effect of the campaign is evidenced by current rising outputs. Men and management are working together more harmoniously than probably at any period in the peace-time history of the industry. At one works the previous weekly average of 1,700 tons has risen to 2,000; at another from 1,5oo tons to 1,9oo tons. A third created a weekly record in the bar-mill department with 24 hours to spare.

Some of the men's leaders point out, however, that the increased outputs are not entirely due to the campaigns. Several furnaces have been converted to oil firing, giving a more stable output. At others the quality of coal is said to have improved. The West Wales steel and tinplate area embraces about eighty furnaces, of which between sixty and seventy are in commission at one time. Ten have been converted to oil firing. One new furnace constructed specially for oil firing has just been opened—the second in the whole country. This•recently gave a record output of 856 tons. Here then is an example of what pulling together can mean. The initiative came from the management, but it was chiefly the workers who were the active instruments in carrying out the plan. Although it may be true that their ultimate enthusiasm was derived from vigorous sup- port of a Government they helped to put into power and whose existence they are anxious to maintain, one feels that they are, as everyone did in 1940, putting country before party. Along this road lies victory in the economic struzgle.