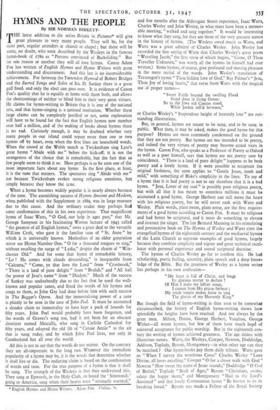 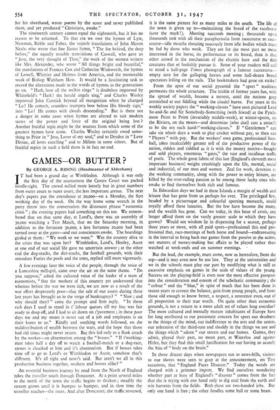 HYMNS AND THE PEOPLE

By SIR NORMAN BIRKETV,- THE latest addition to the series Britain in Pictures* will give great pleasure to very many people. They will be, for the most part, regular attenders at church or chapel ; but there will be some, no doubt, who were described by the Wesleys in the famous hymn-book of 1780 as "Persons convinced of Backsliding." But for one reason or another they will all love hymns. Canon Adam Fox has written of English Hymns and Hymn Writers with great understanding and discernment. And this last is no inconsiderable achievement. For between the Yattendon Hymnal of Robert Bridges and the Sacred Songs and Solos of Ira. D. Sankey there is a great gulf fixed, and only the elect can pass over. It is evidence of Canon Fox's quality that he is equally at home with them both, and allows the shortcomings of neither to blind him to their very great virtues. He claims for hymn-writing in Britain that it is one of the national arts, and that hymn-singing is a national institution. Whether these large claims can be completely justified or not, some explanation will have to be found for the fact that English hymns now number over half a million, and of the making of books about hymns there is no end. Curiously enough, it may be doubted whether very many people in--our island could repeat more than one or two hymns off by heart, even when the first lines are household words. When the crowd at the Welsh match at Twickenham sing Lyte's great hymn "Abide with me" before the kick-off, it is not the strangeness of the choice that is remarkable, but the fact that so few people seem to think it so. Here perhaps is to be seen one of the most important facts about any hymn. In the first place, at least, it is the tune that matters. The spectators sing "Abide with me" not because Twickenham evokes strong religious emotions, but simply because they know the tune.

• When a hymn becomes widely popular it is nearly always because of the tune. The astonishing success of Hymns Ancient and Modern, when published with the Supplement in 1889, was in large measure due to this cause. And the ordinary reader may perhaps find some confirmation of this in his own experience. That magnificent hymn of Isaac Watts, "0 God, our help in ages past," that Mr. George Sampson in his fascinating Warton lecture of 1943 called "the greatest of all English hymns," owes a great deal to the versatile William Croft, Who gave it the familiar tune of "St. Anne" by which it is universally known. Methodists of an older generation never see Hymn Number One, "0 for a thousand tongues to sing," without recalling the surge of "Lydia," despite the charm of "Win- chester Old." And for some that hymn of remarkable history, " Lo ! He comes with clouds descending," is inseparable from "Calcutta," "Come, ye that love the Lord" from " Cranbrook," "There is a land of pure delight" from "Beulah," and "All hail the power of Jesu's name" from "Diadem." Much of the success of Sankey was undoubtedly due to the fact that he used the well- known and popular tunes, and fitted the words of his hymns and songs to them, as John Gay had done before him with such success in The Beggar's Opera. And the itnmortalising power of a tune is plainly to be seen in the case of John Peel. It must be accounted a slender claim to immortality to have kept a pack of hounds for fifty years., John Peel would probably have been forgotten, and the words of Graves's song too, had it not been for an obscure chorister named Metcalfe, who sang in Carlisle Cathedral for fifty years, and adapted the old lilt of " Cannie Annie" to the air that is sung today, and by which John Peel lives, not only in Cumberland but all over the world.

All this is not to say that the words do not matter. On the contrary they are all-important in the long run. Whatever the immediate popularity of a hymn may be, it is the words that determine whether it shall live or die. The enduring claim is based on the combination of words and tune. For the true purpose of a hymn is that it shall be sung. The strength of the Wesleys is that they understood this. They sang at Epworth, in the Holy Club, on board the Simmonds ' going to America, sang when their hearts were "strangely warmed," *English Hymns and Hymn Writers. Adam Fox. Collins. 5s and five months after the Aldersgate Street experience, Isaac Watts, Charles Wesley and John Wesley, in what must have been a memor- able meeting, "walked and sang together." It would be interesting to know what they sang, for they are three of the very greatest names in the history of hymns. (The Wesleys owed much to Watts, and Watts was a great admirer of Charles Wesley. John Wesley has recorded the fine saying of Watts that Charles Wesley's great poem "Wrestling Jacob," the first verse of which begins, "Come, 0 Thou Traveller Unknown," was worth all the hymns he himself had ever written.) Some hymns, of course, give profound and moving pleasure in the mere recital of the words. John Wesley's translation of Tersteegen's hymn "Thou hidden love of God," Ray Palmer's " Jesu, Thou Joy of loving hearts," that verse from Watts with the magical use of proper names- " Sweet Fields beyond the swelling Flood Stand drest in living Green: So to the Jews old Canaan stood, While Jordan roll'd between," or Charles Wesley's "Stupendous height of heavenly love" are out-' standing illustrations.

But, in general, hymns are meant to be sung, and to be sung in public. What then, it may be asked, makes the good hymn for this

purpose? Hymns are most commonly condemned on the ground that they are not poetry. But hymns are not intended to be poetry, and indeed the very virtues of poetry may become actual vices in the hymn. Canon Fox, who speaks as a Professor of Poetry at Oxford as well as a poet himself, says that hymns are not poetry save by coincidence. "There is a land of pure delight" happens to be both poetry and a lovely hymn. If it were possible to recapture the original freshness, the same applies to "Gentle Jesus, meek and mild," with something of Blake's simplicity in the lines. To say of

a hymn that it is bad poetry is not to say therefore that it is a bad hymn. " Jesu, Lover of my soul" is possibly poor religious poetry, but with all that it has meant to countless millions it must be accounted a good hymn. George Herbert can still move the heart with his religious poetry, but he will never rank with Watts and Wesley. Plain words, plain metre, plain sense, are the first require- ments of a good hymn according to Canon Fox. It must be religious and had better be scriptural, and it must do something to elevate and instruct the singer. The late Bernard Manning in his stimulating and provocative book on The Hymns of Wesley and Watts cites the evangelical hymns of the eighteenth century and the mediaeval hymns of the Latin Church as supreme examples of good hymns, largely because they combine simplicity and vigour and great technical excel- lence with personal experience and sound scriptural doctrine.

The hymns of Charles Wesley go far to confirm this. He had scholarship, poetic feeling, sincerity, plain speech and a deep know. ledge of the Bible. But the greatness of Wesley as a hymn writer lies perhaps in his own confession- " My heart is full of Christ, and longs Its glorious matter to declare Of Him I make my loftier songs, I cannot from His praise forbear ; My ready tongue makes haste to sing The glories of my Heavenly King."

But though the field of hymn-writing is thus seen to be somewhat circumscribed, the history of English hymn-writing shows how splendidly the heights have been reached. And not always by the great men. Milton, Donne, George Herbert, Vaughan, George Wither—all wrote hymns, but few of them have much hop& of universal acceptance for public worship. But in the eighteenth cen- tury the writing of hymns achieved greatness. The age shines with illustrious names. Watts, the Wesleys, Cowper, Newton, Doddridge, Addison, Toplady, Byrom, Montgomery—in what other age can they be matched ? Our hymn-books pay them daily tribute. Watts gave us "When I survey the wondrous Cross" Charles Wesley "Love Divine, all loves excelling," Cowper " 0 for a closer walk with God" Newton "How sweet the name of Jesus sounds," Doddridge "0 God of Bethel," Toplady "Rock of Ages," Byrom "Christians, awake, salute the happy morn," and Montgomery "Hail to the Lord's Anointed" and that lovely Communion hymn "Be known to us in breaking bread." Byrom was made a Fellow of the Royal Society for his shorthand, wrote poems by the score and never published them, and yet produced "Christians, awake."

The nineteenth century cannot equal the eighteenth, but it has no reason to be ashamed. To that era we owe the hymns of Lyte, Newman, Keble and Faber, the superb translations of John Mason Neale, who wrote that fine Easter hymn, "The foe behind, the deep before," the equally notable translations of Caswall, who gave us " Jesu, the very thought of Thee," the work of the women writers like Mrs. Alexander, who wrote "All things bright and beautiful," the translations of Frances Cox and Catherine Winkworth, the hymns of Lowell, Whittier and Holmes from America, and the memorable work of Bishop Walsham How. It would be a fascinating task to record the alterations made in the words of hymns as the generations go on. "Hark, how all the welkin rings" is doubtless improved by Whitefield's " Hark ! the herald angels sing," and Charles Wesley improved John Cennick beyond all recognition when he changed "Lo! He cometh, countless trumpets bow before His bloody sign," into "Lo! He comes with clouds descending." But is there not a danger in some cases when hymns are altered to suit modern tastes of the power and " force of the original being lost ? Another fruitful topic might be the sources from which some of the greatest hymns have come. Charles Wesley certainly owed some- thing to Prior in " Jesu, Lover of my soul," and to Dryden in "Love Divine, all loves excelling" and to Milton in some others. But of fruitful topics in such a field there is in fact no end.