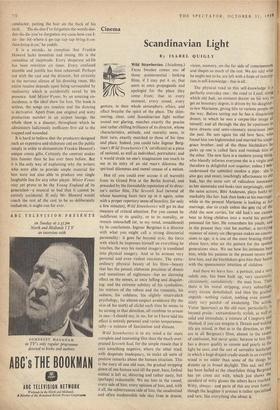 By ISABEL QUIGLY Wild Strawberries. (Academy.) FROM Sweden comes one of those quintessential - looking films, if I may put it so, that seem at once propaganda and apologist for the place they come from; that in every moment, every mood, every gesture, in their whole atmosphere, ethics, and effect breathe the spirit of the place. The shim- mering, clear, cold Scandinavian light neither muted nor glaring, matches exactly the precise and rather chilling brilliance of its director, whose characteristics, attitude, and morality seem, in their turn, exactly matched to those of his time and place. Indeed, you could take Ingmar Berg- man's Wild Strawberries (`A' certificate) as a piece of national, as wen as individual, portraiture; and it would strain no one's imagination too much to see in its story of an old man's dilemma the spiritual dilemmas and moral unease of a nation.

Hot (if you could ever accuse it of warmth) from its Grand Prix at the Berlin festival, and preceded by the formidable reputation of its direc- tor's earlier film, The Seventh Seal (several of whose haunting faces turn up in it again, some with a proper repertory sense of humility, for only a few minutes), Wild Strawberries will get its due measure of critical attention. For you cannot be indifferent to its quality, or to its morality, or remain untouchal (or, to my mind, unsaddened) by its conclusions. Ingmar Bergm'an is a director with what you might call a strong directorial personality : it goes far beyond style, the force with which he impresses himself on everything he touches, the way his mental imagery is translated into physical imagery. And so he arouses very personal and even violent reactions. The extra- ordinary physical beauty of his films—beauty that has the poised, elaborate precision of dream and sometimes of nightmare—has an alarming effect on the senses, at once lulling and disquiet- ing; and the extreme subtlety of his symbolism, his mixture of the robust and the romantic, his sadness, his coldness, his slightly smart-aleck psychology, his almost-suspect avoidance (by the skin of his teeth) of cliché each time he seems to be aiming in that direction, all combine to arouse in one—I should say,, in me, for as I have-said his effect is entirely personal and varies temperamen- tally—a mixture of fascination and distaste.

Wild Strawberries is to my mind a far more complete and interesting film than the much over- praised Seventh Seal, for the simple reason that it says something negative, where the other tried, with desperate inadequacy, to make all sorts of positive remarks about the human situation. This is the story of one old man, the gradual stripping down of one human soul till the pool, bare, forked animal is left us, shivering and rather nasty, but (perhaps) redeemable. We see him in the round, every side of him, every opinion of him, and, with it all, the subterranean side of him, the unadmitted and often inadmissible side that lives in dream, vision, memory, on- the far side of consciousness, and shapes so much of the rest. We are told what he ought not to be, are left with a hope of redemp- tion in self-knowledge : that is all.

The physical road to this self-knowledge is perfectly everyday one : the road to Lund, along which old lsak, an eminent doctor on his way to get an honorary degree, is driven by his daughter- in-law Marianne, giving lifts to various people on the way. Before setting out he has a disquieting dream, in which he sees a corpse-like image of himself; and all through the day he continues to have dreams and semi-visionary excursions into the past. He sees again his old love Sara, who found him too highminded and married his scape- grace brother; and of the three hitchhikers he picks up one is called Sara and reminds him of the other. The new Sara is a modern young thing, who blandly informs everyone she is a virgin and therefore (a delightful non sequitur, unless I mis- understood the subtitles) smokes a pipe : she Is also gay and sweet, touchingly affectionate to old Isak, has the same sort of ridiculous innocence as her namesake and looks (not surprisingly, since the same actress, Bibi Anderson, plays both) re' markably like her. Isak then looks at his marriage; while in the present Marianne is looking at her marriage, due to crash unless she gets rid of the child she now carries, for old Isak's son cannot bear to bring children into a world his parents poisoned for him. He remembers his youth, and in the present they visit his mother, a terrifying monster of ninety-six (Bergman makes no conces- sions to age; it is one of the most bracing things about him), who set the pattern for the spoiled generations since. We see how his.intimates hate him, while his patients in the present revere and love him, and the hitchhikers give him their hearts with the spontaneous intuition of children.

And there we leave him : a portrait, and a very subtle one, has been built up, very cautiously. circuitously, cumulatively : the man lives. Then there is his moral stripping, every subterfuge, every excuse demolished; and then the gradual anguish—nothing violent, nothing even honied' iately very painful—of awakening. The acting, Victor Sjostrom's as the old man, particularly, Is beyond praise : 'extraordinarily stylish, as well as solid and immediate, a mixture of Congreve and Method, if you can imagine it. Dream and waking life are mixed, in that as in the direction, as theY are in all Bergman's films, almost to the extent of confusion, but never quite; because to him 11N has a dream quality as remote and pearly as the light he uses, and the sort of surrealist landscape in which a huge draped cradle stands in an evening wood is no odder than some of the things. he dreams up in broad daylight. This sad, sad 11101 has been hailed as the cheerfulest thing Bergman has yet come out with, which just shows the standard of witty gloom the others have reached: Witty, always : and parts of this are even funnY, though the laughter it arouses is rather specialised and rare, like everything else about it.