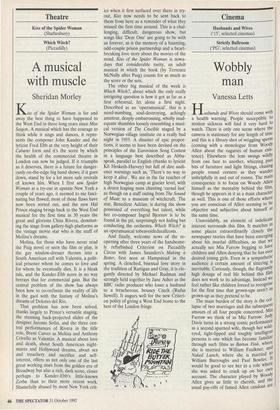 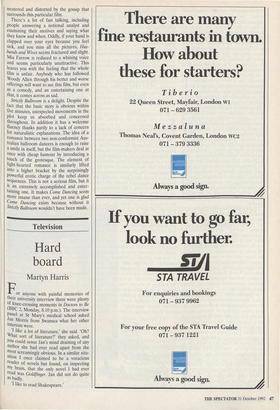 Husbands and Wives should come with a health warning. People susceptible to motion sickness will find it very hard to watch. There is only one scene where the camera is stationary for any length of time and this is a library shot of wriggling sperm (coming with a monologue from Woody Allen about the vagaries of human exis- tence). Elsewhere the lens swings wildly from one face to another, whizzing past bits of furniture and light fittings, chasing people round corners as they wander unhelpfully in and out of rooms. The main consequence is to focus on Woody Allen himself as the mentality behind the film, though he appears in it as a main character as well. This is one of those efforts where you are conscious of Allen seeming to be objective and subjective about himself at the same time.

Unavoidably, an element of indelicate interest surrounds this film. It matches In some places extraordinarily closely the newspaper stories that have been emerging about his marital difficulties, so that we actually see Mia Farrow begging to have children and Allen denying that he has ever desired young girls. Even in a sympathetic audience a certain amount of tittering is inevitable. Curiously, though, the flagrantly high dosage of real life behind this film does not work to its advantage. Instead we feel rather like children forced to recognise for the first time that grown-ups aren't as grown-up as they pretend to be. The main burden of the story is the col- lapse of two marriages and the subsequent amours of all four people concerned. Mia Farrow we think of as Mia Farrow. Judy Davis turns in a strong comic performance as a second spurned wife, though her wild- eyed, tight-lipped and toughly intelligent persona is one which has become familiar through such films as Barton Fink, where she is married to William Faulkner, and Naked Lunch, where she is married to William Burroughs and Paul Bowles. It would be good to see her in a role where she was asked to crack up on her Own account. The character played by Woody Allen gives us little to cherish, and the usual pay-offs of famed Allen candour are neutered and distorted by the gossip that surrounds this particular film.

There's a lot of fast talking, including people answering a notional analyst and examining their motives and saying what they knew and when. Oddly, if your hand is clapped over your eyes because you feel sick, and you miss all the pictures, Hus- bands and Wives seems fractured and slight. Mia Farrow is reduced to a whining voice and seems particularly unattractive. This leaves you with the feeling that the whole film is unfair. Anybody who has followed Woody Allen through his better and worse offerings will want to see this film, but even as a comedy, and an entertaining one at that, it comes across as sad.

Strictly Ballroom is a delight. Despite the fact that the basic story is obvious within five minutes, unexpected movements in the plot keep us absorbed and concerned throughout. In addition it has a welcome fluency thanks partly to a lack of concern for naturalistic explanations. The idea of a romance between two non-conformist Aus- tralian ballroom dancers is enough to raise a smile in itself, but the film-makers deal at once with cheap humour by introducing a touch of the grotesque. The element of light-hearted romance is similarly lifted into a higher bracket by the surprisingly Powerful erotic charge of the rebel dance sequences. This is not a serious film, but it is an extremely accomplished and enter- taining one. It makes Come Dancing seem more insane than ever, and yet one is glad Come Dancing exists because without it Strictly Ballroom wouldn't have been made.