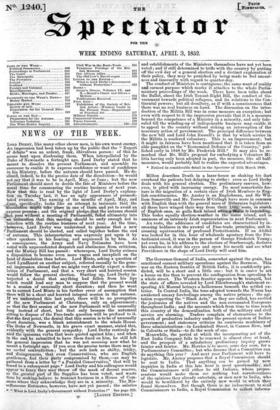 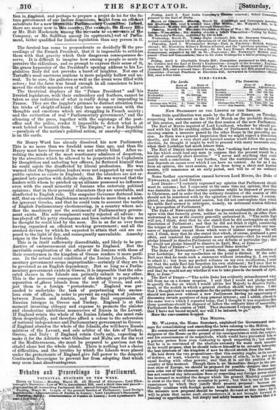 Page 1, 3 April 1852 — The Governor-General of India, somewhat against the grain, has sanctioned
Close

The Governor-General of India, somewhat against the grain, has sanctioned

earnest military operations against the Burmese. This war on the Eastern frontier of British India, it is confidently pre- dicted, will be a short and a little one : but it is easier to set a house on fire than to prevent the conflagration from spreading to a whole street. The Western frontier appears to lta tranquil, but the State of affairs revealed by Lord Ellenhorough's statement re- apecting Ali Moored betrays a hollowness beneath the settled ex- terior. In Central India, the tone adopted towards the Nizam has awakened uneasy forebodings among the native princes ; the agi- tation respecting the "Black Acts," as they are called, has excited the jealousies of the natives and the non-covenanted Europeans throughout India ; and the accounts which from time to time reach this country of the demoralization both of the military and civil service are alarming. Traders complain of obstructions to the growth of productive industry under the present system of Indian ' government ; and statesmen criticize its cumbrous machinery of three administrations—in Leadenhall Street, in Cannon Row, and in Calcutta or Simla—to do the work of one.

Meanwhile, the period at which the incorporating act of the East India Company falls to be renewed is almost close at hand, and the prospect of a satisfactory preliminary inquiry grows fainter and fainter. Mr. Herries is to move, some day soon, for a. Parliamentary Committee ; but who dreams that a Committee can do anything this year ? And next year Parliament will have to legislate. Mr. Anstey proposes that a Royal Commission should be sent to India. That anything can be gained by new inquiries in India at this late 'lour is most questionable; and the Commissioners will either be old Indians, whose prepos- sessions would make them see nothing but corroborations of the opinions they already entertain, or men new to India, who would be bewildered by the entirely new world in which they found themselves. But though there is no inducement to send. Commissioners to India, a Royal Commission to collect informs-

tion in England, and perhaps to prepare a projet de loi for the fu- ture government of our Indian dominions, litIght form an efficient substitute for a now itaratisible Parliamentary Committee; Indeed, there are many now in this country, (for example, Sir Henry Silis or Mr. Holt Mackenzie among the servants or ex-servants of the Company, or Mr. Sullivan amen its opponents,) out of Parlia- ment, better qualified for Indian legislation than any person in it.