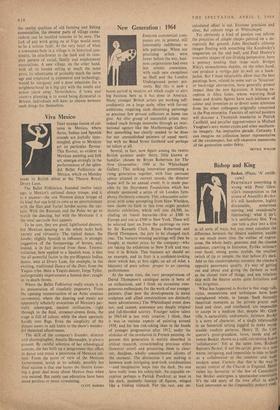 ENGLISH commercial com- panies are, in general, still lamentably indifferent to arts patronage. When our practising artists were fewer before the war, busi- ness corporations had even less artistic conscience, with such rare exceptions as Shell and the London Underground poster pio- neers. But this is now a boom period in modern art which ought to alert big business here as it has done in America. Many younger British artists are working self- confidently on a large scale, often with far-out ambitions. requiring such discerning patronage as precious few private collectors at home can give. An elite group of successful artists may indeed reach foreign museums through an inter- national agency like the Marlborough Gallery. But something has clearly needed to be done for our unestablished painters of equal merit, but with no Bond Street foothold and perhaps no takers at all.

Several, in fact, now figure among the twelve British painters under thirty, little known or familiar, chosen by Bryan Robertson for The New Generation : 1964 a: the Whitechapel Gallery. This striking innovation presenting a rising generation together, with four canvases apiece attuned to current moods, the director hopes will be an annual event. It is made pos- sible by the Stuyvesant Foundation which has already sponsored a series of six London Sym- phony Orchestra concerts. This tobacconist enter- prise, with some prompting from Huw Wheldon, now shows its faith in this (one might predict) historic exhibition, which will cost £4,500, in- cluding six travel bursaries—five at £300 to Europe and one at £500 to New York. These will be selected later on from the paintings on view by Sir Kenneth Clark, Bryan Robertson and David Thompson, the jury to be changed each year. The bursary-winning paintings will then be bought, at market price, by the company—who are taking the exhibition to New York and may tour it in Britain. This business act should set an example, and its fruit is a confident-looking show which has, at first sight, an air of eclat, a blazonry of pure colour, proper to an opening performance.

At the same time, the very perceptiveness of David Thompson's catalogue notes is born of an enthusiasm, and I think on occasions over-

generous enthusiasm, for the work of our younger painters. (Just now the developments in metal sculpture and allied constructions are distinctly more adventurous.) The Whitechapel event does not, and cannot, announce any deeply original and full-blooded activity. Younger native talent in 1963-64 is less truly creative, I think, than it was in various aspects of painting around 1938, and far less risk-taking than in the hands of younger progressives after 1912, under the stimulus of the revolution in French painting. At present this generation is mainly absorbed in critical research, cross-breeding previous styles

(however outré) and presenting them in clear-

cut, deadpan, wholly unsentimental idioms of the moment. The distinction I am making is between such intriguing new-look combinations —and imaginative leaps into the dark. No one

here really loses his safety-belt. An arguable ex- ception perhaps is Patrick Procktor, at least in his dark, painterly fantasy of figures, winged like a folding triptych. For the rest, any un-

calculated effect is out. Extreme precision and clear, flat colours reign at Whitechapel.

Yet obviously a kind of passion can inform the precision of simple shapes painted on a de- ceptively flat ground. John Hoyland's ribbony images floating with something like Kandinsky's magnetism on the end wall, and Paul Huxley's evocative shapes of eye-illuding perspective, have a potency needing their large scale. Bridget Riley's monochrome dazzles, on the other hand, can produce a vertigo just as well on a book- jacket. But 1 must reluctantly allow that the best paintings here, related in some sort to 'Situation' or hard-edge abstraction, have generally greater impact than the new figuration. A bracing ex- ception is Allen Jones, whose wavering fluid buses and double figures have such jubilance of colour and invention as to divert some attention from his other colleagues originally concerned in the Pop enterprise. Fanciers of untried painters will discover a Twentyish mannerist in Patrick Caulfield, and peculiar aggressiveness in Michael Vaughan's sexy motor-cycles and other mechanis- tic imagery. An instructive parade. Certainly I can imagine no collection better representative of the circumspect, but still obsessive mannerists of the generation under thirty.