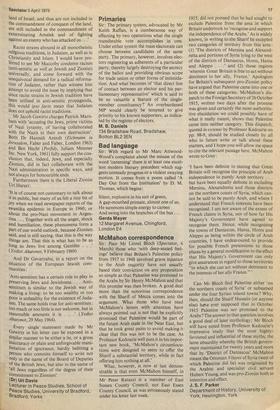 Sir: Pace Mr Lionel Bloch (Spectator, 6 March) those who 'with deep-seated feel- ings' believe that Britain's Palestine policy from 1917 to 1948 involved grave injustice to the Arab majority have not usually based their conviction on any proposition so simple as that Palestine was promised to the Arabs by Sir Henry McMahon and that this promise was then broken. A good deal more than the notorious correspondence with the Sharif of Mecca comes into the argument. What those who have read McMahon's letters with attention have always pointed out is not that he explicitly promised that Palestine would be part of the future Arab state in the Near East, but that he took great pains to avoid making it clear that this was not to be the case. As Professor Kedourie well puts it in his impor- tant new book, 'McMahon's circumlocu- tions were designed to seem to offer the Sharif a substantial territory, while in fact offering him nothing at all.'

What, however, is now at last demon- strable is that even McMahon himself, in 1915, did not pretend that he had sought to exclude Palestine from the area in which Britain undertook to 'recognise and support the independence of the Arabs.' As is widely known, in writing to the Sharif he excepted two categories of territory from this area : (1) 'The districts of Mersina and Alexand- retta and portions of Syria lying to the west of the districts of Damascus, Horns, Hama and Aleppo . . .' and (2) those regions `wherein Great Britain is free to act without detriment to her ally, France.' Apologists for Britain's subsequent pro-Zionist policy have argued that Palestine came into one or both of these categories. McMahon's dis- patch to the Foreign Secretary of 26 October 1915, written two days after the promise was given and certainly the most authorita- tive elucidation we could possibly have of what it really meant, shows that Palestine came into neither category. This dispatch, quoted in extenso by Professor Kedourie on pp. 98-9, should be studied closely by all who in future write or talk about these matters, and I hope you will allow me space to cite the relevant passage here. McMahon wrote to Grey: 'I have been definite in stating that Great Britain will recognise the principle of Arab independence in purely Arab territory . . . but have been equally definite in excluding Mersina, Alexandretta and those districts on the northern coasts of Syria, which can- not be said to be purely Arab, and where I understand that French interests have been recognised. I am not aware of the extent of French claims in Syria, nor of how far His Majesty's Government have agreed to recognise them. Hence, while recognising the towns of Damascus, Hama, Horns and Aleppo as being within the circle of Arab countries, I have endeavoured to provide for possible French pretensions to those places by a general modification to the effect that His Majesty's Government can only give assurances in regard to those territories "in which she can act without detriment to the interests of her ally France." ' Can Mr Bloch find Palestine either 'on the northern coasts of Syria' or subsumed under the four Syrian inland towns? Why, then, should the Sharif Hussein (or anyone else) have ever supposed that in October 1915 Palestine was not promised to the Arabs ?The answer to that question involves a good deal of later mythology ; Mr Bloch will have noted from Professor Kedourie's impressive study that the most highly- favoured and influential of these myths, the lame absurdity whereby the British govern- ment maintained for twenty years and more that by 'District of Damascus' McMahon meant the Ottoman Vilayet of Syria (west of which Palestine did lie) was originated by the Arabist and specialist civil servant Hubert Young, and was pro-Zionist both in intention and effect.