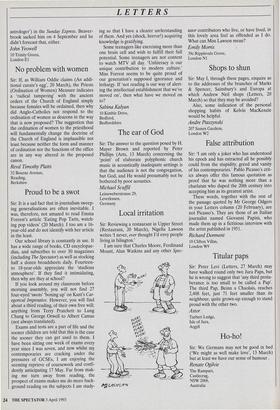 Sir: 'I am only a joker who has understood his epoch and has extracted all he possibly could from the stupidity, greed and vanity of his contemporaries.' Pablo Picasso's crit- ics always offer this famous quotation as proof that he was nothing more than a charlatan who duped the 20th century into accepting him as its greatest artist.

These words, together with the rest of the passage quoted by Mr George Odgers in your Letters column (20 February), are not Picasso's. They are those of an Italian journalist named Giovanni Papini, who made them up in a fictitious interview with the artist published in 1951.