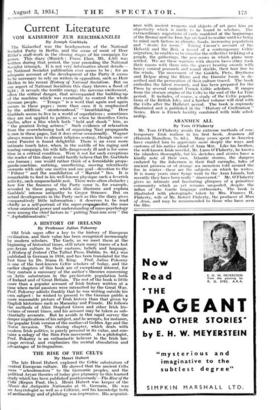 Mr. Toni O'Flaherty avoids the extreme methods of con- temporary Irish realism in his first book, Arainnen All (Hamish Hamilton, 7s. 6d.). Many years spent in America have enabled him to appreciate more deeply the ways and customs of his native island of Aran Mar. Like his brother, the well-known Irish novelist, Mr. Liam O'Flaherty, he knows the islanders thoroughly, but his sketches and stories have a kindly note of their own. Atlantic storms, the dangers endured by the fishermen in their frail curraghs, tales of ancient prowess or of strange sea monsters told around the fire in winter—these are the subjects on which he writes. It is many years since Synge went to the Aran Islands, but recently they have been really** discovered." Mr. O'Flaherty gives us intimate and fascinating glimpses of a primitive community which as yet remains unspoiled, despite the influx of the Gaelic language enthusiasts. The book is illustrated with photographs taken by Mrs. Frances H. Flaherty, wife of Mr. Robert Flaherty, the producer of Man of Aran, and may be recommended to those who have seen the film.