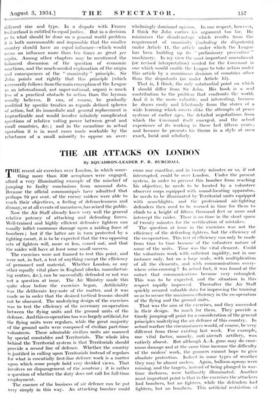 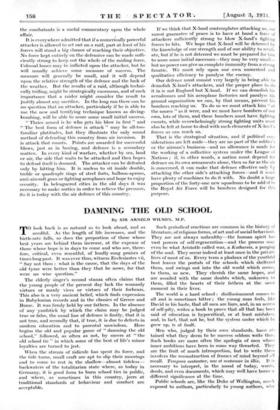 THE AIR ATTACKS ON LONDON

THE recent air exercises over London, in which some- thing more than 350 aeroplanes were engaged, afford a very illuminating example of the mischief of jumping to faulty conclusions from unsound data. Because the official communiques have admitted that perhaps 70 per cent. of the enemy raiders were able to reach their objectives, a feeling of defencelessness and dismay, or at all events of uneasiness, has seized the public.

Now the Air Staff already knew very well the general relative potency of attacking and defending forces. Well-trained and highly efficient defensive fighters can usually inflict enormous damage upon a raiding force of bombers ; but if the latter are in turn protected by a fighting escort, it is to be expected that the two opposing sets of fighters will, more or less, cancel out, and that the raider will have at least some small success.

The exercises were not framed to test this point, and were not, in fact, a test of anything except the efficiency of personnel and material. Whether London, or any other equally vital place in England (docks, manufactur- ing centres, &c.), can be successfully defended or not was not a question at issue. The Air Ministry made this quite clear before the exercises began. Artificiality was the deliberate key-note of the matter, and it was made so in order that the desired tactical lessons should not be obscured. The underlying design of the exercises was to test the efficiency of the necessary co-operation between the flying units and the ground units of the • defence. And this co-operation too was largely artificial, for the flying units were regulars, while the great majority of the ground units were composed of civilian part-time volunteers. These admirable civilian units are manned by special constables and Territorials. The whole idea behind the Territorial system is that Territorials should provide a .second line of defence. Whether the country is justified in calling upon Territorials instead of regulars for what is essentially first-line defence work is a matter upon .which some people hold very decided views. That involves no disparagement of the amateur ; it is rather a question of whether the duty does nOt call for full-time employment.

The essence of the business of air defence can be put very simply in this way. An attacking bomber could cross our coastline, and in twenty minutes -or so, if not interrupted, could be over London. Under the present system, in order to prevent this bomber from reaching his objective, he needs to be located by a volunteer observer corps equipped with sound-locating apparatus, he needs to be illuminated by Territorial units equipped with searchlights, a ad t lie professional air-fighting defenders then need to be warned in time for them to climb to a height of fifteen thousand feet or more and intercept the raider. There is no time in the short space of twenty minutes for tile rectification of mistakes.

The question at issue in the exercises was not the efficiency of the defending fighters, but the efficiency of the co-operation. This test of efficiency can only be made from time to time because of the volunteer nature of some of the units. Time was the vital clement. Could the volunteers work with sufficient rapidity, not in one instance only, but on a large scale, with multiplication of all the elements, and with communications every- where criss-crossing ? In actual fact, it was found at the outset that communications became very entangled. This was to be expected, and the situation in this respect rapidly improved. Thereafter the Air Staff quickly secured valuable data for improving the training so as to secure the maximum efficiency in the co-operation of the flying and the ground units.

That was the aim of the exercises, and they succeeded in their design. So much for them. They provide a timely jumping-off point for a consideration of the general principles underlying the air defence of this country. In actual warfare the circumstances would, of course, be very different from those existing last week. For example, one vital factor, namely, anti aircraft artillery, was entirely absent. But although A.-A. guns may do enor- mous damage and at the same time increase the difficulty of the raiders' work, the gunners cannot hope to give absolute protection. Indeed in some types of weather they may be almost useless. Again, balloon-aprons were missing, and the targets, instead of being plunged in war- time darkness, were brilliantly illuminated. Another most important point is that in the exercises the attackers had bombers, but no fighters, while the defenders bad fighters, but no bombers. This artificial restriction of the combatants is a useful commentary upon the whole affair.

It is everywhere admitted that if a numerically powerful attacker is allowed to set out on a raid, part at least of his forces will stand a big chance of reaching their objective. No force kept entirely on the defensive can be made suffi- ciently strong to keep out the whole of the raiding force. Colossal losses may be inflicted upon the attacker, but he will usually achieve some measure of success. The measure will generally be small, and it will depend upon the relative strength of the defence and the luck of the weather. But the results of a raid, although techni- cally trifling, might be strategically enormous, and of such importance that a raider might consider the result to justify almost any sacrifice. In the long run there can be no question that an attacker, particularly if he is able to use the new and terrifying technique known as diving- bombing, will be able to score some small initial success.

"Thrice armed is he who gets his blow in first" and "The best form of defence is attack" may be all-too- familiar platitudes, but they illustrate the only sound method of defending this country from air invasion. It is attack that counts. Points are awarded for successful blows, just as in boxing, and defence is a secondary matter. In every kind of warfare, whether by sea, land or air, the side that waits to be attacked and then hopes to defend itself is doomed. The attacker can be defeated only by hitting him. It is useless to sit inside double, treble or quadruple rings of steel forts, balloon-aprons, anti-aircraft guns or fighting aeroplanes and hope to enjoy security. In beleaguered cities in the old days it was necessary to make sorties in order to relieve the pressure. So it is today with the air defence of this country. If we think that X-land contemplates attacking us, our surest guarantee of peace is to have at hand a force of attackers sufficiently strong to blow X-land's fighting forces to bits. We hope that X-land. will be deterred by the knowledge of our strength and of our ability to retali- ate, but if he is not deterred we must be prepared for him to score some initial successes—they may be very small.- but no power can give us complete immunity from a strong fanatic. We must rely upon our own, numerical and qualitative efficiency to paralyse the enemy.

Our defence must consist very largely in being Able to demolish X-land's attackers, And the proper place to do it in is not England but X-land. If we can demolish his aerodromes and his aeroplane, factories and paralyse his ground organization we can; by that means, prevent his bombers reaching us: To do so we must attack him "at the source" as it were, and we must have bombers of our own, lots of them, and these bombers must have fighting escorts, while overwhelmingly strong fighting units must also be left at home to deal with such elements of X-lani's forces as can reach us.

• That is the strategical situation,, and if political con- siderations are left aside—they are no part of the soldier's or the airman's business—and no allowance is made for the working of a collective system under the League el Nations ; if, in other words, a nation must depend for defence on its own armaments alone, then so far as the air is concerned, it can make that defence effective only 1.y attacking the other side's attacking forces—and it must have plenty of machines to do it with. No doubt a large proportion of the forty-one new squadrons to be adthd to the Royal Air Force will be bombers designed for this purpose.