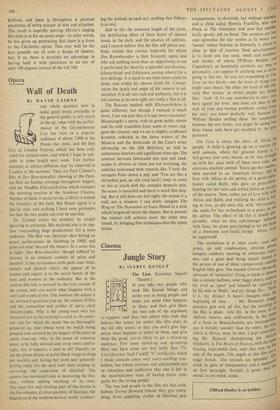 The Lion. (Leicester Square Theatre.) IF you take two people who look like human beings and strike you as being people and make you mind what happens to them, and then give them the bad side of the argument to support, and then two others who look and behave like actors (or rather like film stars, in the old silly sense), so that you don't give tup- pence what happens to either of them, and give them the good, you're likely to get a mixed-up audience. Few more mixed-up and up-mixing films can have come our way lately than The Lion (director: Jack Cardiff; 'EY certificate), which I think contains some very nasty-smelling sym- bolism, but whose saviours and anti-symbols are so colourless and ineffective that one is left in the unsatisfactory state of having warm sym- pathy for the wrong people.

The two real people in the film are that arch- human Trevor Howard (whom they give every- thing, from appalling clothes to hilarious pro-

nouncements, to diminish, but without success)• and a child called Pamela Franklin, who was Flora in The Innocents and now has another fairly spooky job on hand. The saviours are tWo who epitomise the star system at its worst, two 'names' whose likeness to humanity is about as close as that of luscious food advertisements is to food you can taste, smell and swallow;: and neither of whom (William Holden and Capuchinc), so hopelessly synthetic are they in personality, can appear in anything one is really going to feel for. So you are responding to The Lion on two levels---one the level of things You might care about, the other the level of the old- style film 'drama' in which people say things like: 'And—if it's any consolation to you—You have (gulp) my love,' and lions are shot in the nick of time and human problems settled from the start, you know perfectly well, because its William Holden settling them. No connection between the two levels; you might he seeing two films whose reels have got muddled by the pro- jectionist.

The Lion is about the effect of Africa on people. A child is growing up on a reserve for wild animals, where her greatest friend is 3 full-grown lion over whom, as he was brought up with her since both of them were cubs. she exercises absolute control. Years ago her mother, then married to an American lawyer, fell In love with Africa in the person of a great-white- hunter called Bullit, who gave up great-white- hunting for her sake and settled down as warden of the reserve. Now, rather out of love with bout Africa and Bullit, and realising the child is fall, ing in love, as she once did, with `Africanness,,' she sends for her ex-husband in a panic to as' his advice. The effect of all this is deadly Pr°• dictable: since no nice sub-teenager hobnobs with lions, let alone gets invited to be the bride, of a fearsome scar-faced savage, Africa

The symbolism is at once crude, cruel and prissy, an odd combination, obvious Sc'"'3 imagery suddenly seeming to embarrass everY. one, and a great deal being ineptly hinted

the person of one of those transparently childish

English little girls. The warden (Trevor FlowarA) advocate of 'instinctive' living, is made to behave like a sinister buffoon, wear baggy shorts, address his rival as 'sport' and himself be referred t43 by his wife as `Bullit,' and say things like: lber0 e it is, my Africa! It hasn't changed since beginning of time. . . .' Mr. Howard's eraggYi presence gets over all this, but the meaning °11 the .film is plain : wild life, in the sense of 30 African reserve, and civilisation, in the scit. of a farm in Massachusetts, are incomPatib, `i; one is morally sounder than the other; the lion which is Africa, must be shot. kept rernetmr.r, ing Mr. Howard championing the Afri'30 elephants, in The Roots of Heaven, with the safeI blazing, improbable face, only that time on a side of the angels. The angels in this film are soggy bunch. The animals are splendid' he child, in spite of transparency and a Inannthe air (not un-jungly, though), is good. Ann moral, to my mind, slinks.