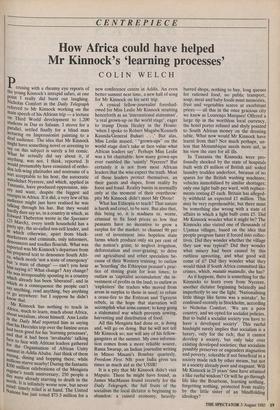 How Africa could have helped Mr Kinnock's 'learning processes'

Perusing with a rheumy eye reports of the young Kinnock's intrepid safari, at one Point I really did burst out laughing. Nicholas Comfort in the Daily Telegraph referred to Mr Kinnock working on the main speech of his African trip — a lecture on Third World development to 1,200 students in Dar es Salaam. I strove for a Parallel, settled finally for a blind man lecturing on Impressionist painting to a deaf audience. The idea that Mr Kinnock might have something novel or arresting to Say on this subject is surely a bit comic. What he actually did say about it, if anything, was not, I think, reported. It Would presumably have consisted of ortho- dox left-wing platitudes and nostrums of a sort acceptable to his host, the autocratic autodidact Nyerere, and which, applied in Tanzania, have produced oppression, nus- etY and want, despite the biggest aid receipts in Africa. If it did, a very few of his audience might just have realised he was talking through his hat. But they would hardly dare say so, in a country in which, as Edward Theberton wrote in the Spectator (23 March), every tenth household has a Party spy, the so-called ten-cell leader, and M which otherwise, apart from black- marketeers and criminals, only informers, denouncers and toadies flourish. What was reported was Mr Kinnock's departure from ms prepared text to denounce South Afri- ca, which needs 'not a state of emergency' ha. t 'a state of change' — can't you hear him saying it? What change? Any change? lie Was irresponsibly spouting in a country Which already has been 'liberated', and in Which as a consequence the people can't saY anything, read anything, buy anything °LI- go anywhere: but I suppose he didn't Know that. A Mr Kinnock has nothing to teach in Africa, much to learn, much about Africa, a. bout socialism, about himself. Ann Leslie in the Daily Mail reported him as saying had his Hercules trip over the famine areas nad been good for his 'learning processes', and that it had been 'invaluable' talking face to face with African leaders gathered for the Organisation of African Unity summit in Addis Ababa. Just think of them vemmg, dining and bopping there, while 1:111lions starve nearby! During the fantastic 4209 million celebrations of the Mengistu r,egime's tenth anniversary, 250 people a day were already starving to death in the nnrth. It is infinitely worse now, but never fund: timely relief is at hand. The United Nations has just voted $73.5 million for a new conference centre in Addis. An even better summit next time, a new hall of song for Mr Kinnock on his next trip.

A cynical fellow-journalist foreshad- owed for Miss Leslie Mr Kinnock strutting henceforth as an 'international statesman', 'a real grown-up on the world stage', eager to trump Denis Healey in the House: 'when I spoke to Robert Mugabe/Kenneth Kaunda/General Buhari . . .' But alas, Miss Leslie mused, '"grown-ups" on the world stage don't take at face value what African leaders say'. Perhaps Miss Leslie was a bit charitable: how many grown-ups ever rumbled the 'saintly' Nyerere? But certainly it is not from most African leaders that the wise expect the truth. Most of these leaders protect themselves, an their guests and dupes, from reality by force and fraud. Reality bursts in normallly only at the moment of their overthrow: pity Mr Kinnock didn't meet Mr Obote!

What has Ethiopia to teach? That nature is harsh and cruel, to be sure. But also that, this being so, it is madness or, worse, criminal to fix food prices so low that peasants have no incentive to grow a surplus for the market: to channel 90 per ■ cent of investment into hopeless gtate farms which produce only six per cent of the nation's grain; to neglect irrigation, deforestation and over-grazing; to drive out agricultural and other specialists be- cause of their Western training; to outlaw as 'hoarding' the Ethiopian peasant's prac- tice of storing grain for lean times; to outlaw as 'capitalist accumulation' the in- vestment of profits in the land; to outlaw as 'exploiters' the traders who moved from areas in surplus to those in need; to refuse a cease-fire to the Eritrean and Tigrayan rebels, in the hope that starvation will accomplish what arms cannot; to keep going a stalemated war which prevents sowing, harvesting and distribution of food. All this Mengistu had done or, is doing and, will go on doing. But he will not tell Mr Kinnock so; nor will any of his fellow- gangsters at the summit. My own informa- tion comes from a more reliable source, Rama Swarup, an Indian journalist writing in Minoo Masani's Bombay quarterly, Freedom First. NB: poor India gives ten times as much aid as the USSR!

It is a pity that Mr Kinnock didn't visit Maputo. There he might have found, as James MacManus found recently for the Daily Telegraph, the full fruits of the socialism the local dictator is beginning to abandon: a ruined economy, heavily- barred shops, nothing to buy, long queues for rationed food, no public transport, soap, meat and baby foods must memories, fruit and vegetables scarce at exorbitant prices — all this in the once gracious city we knew as Lourenco Marques! Offered a large tip in the worthless local currency, the hotel porter refused and shyly pointed to South African money on the dressing table. What now would Mr Kinnock have learnt from that? Not much perhaps, un- less that Mozambique needs more aid, in his view the cure for all ills.

In Tanzania the Kinnocks were pro- foundly shocked by the state of hospitals built with £9 million of British aid: soiled laundry trodden underfoot, because of no spares for the British washing machines; vehicles immobilised by similar shortages; only one light bulb per ward, with replace- ments costing £5 each. Britain has alleged- ly withheld an expected £1 million. This may be very reprehensible; but there must be something else wrong with a state of affairs in which a light bulb costs £5. Did Mr Kinnock wonder what it might be? The Kinnocks also visited one of thousands of Ujamaa villages, based on the idea that people progress faster if forced into collec- tives. Did they wonder whether the village they saw was typical? Did they wonder what misery had been caused by this ruthless uprooting, and what good will come of it? Did they wonder what they would think if South Africa committed like crimes, which, mutatis mutandis, she has?

As it happens, there is something for the Kinnocks to learn even from Nyerere, another dictator beginning belatedly and imperfectly to see the light. 'Nationalising little things like farms was a mistake', he confessed recently in Stockholm, according to Nicholas Comfort. 'We are a poor country, and we opted for socialist policies. But to build a socialist society you have to have a developed society'. This rueful hindsight surely implies that socialism is a luxury, only for the rich; that it cannot develop a society, but only take over existing developed societies; that socialism possibly preserves or engenders stagnation and poverty, tolerable if not beneficial in a society made rich by other means, but not in a society already poor and stagnant. Will Mr Kinnock in 25 years' time have attained a like rueful wisdom? Or will he go through life like the Bourbons, learning nothing, forgetting nothing, protected from reality by the little sister of an blindfolding ideology?