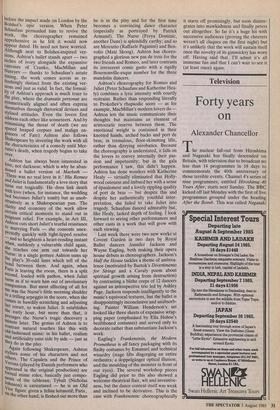 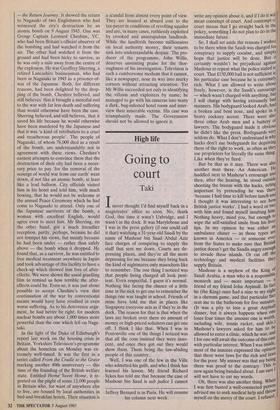 The nuclear fall-out from Hiroshima and Nagasaki has finally descended on Britain, with television due to broadcast no less than 14 programmes in 18 days to commemorate the 40th anniversary of those terrible events. Channel 4's series of nine programmes, entitled Hiroshima 40 Years After, starts next Sunday. The BBC kicked off last Monday with the first of five programmes grouped under the heading After the Bomb. This was called Nagasaki e_) — the Return Journey. It showed the return to Nagasaki of two Englishmen who had witnessed the city's destruction by an atomic bomb on 9 August 1945. One was Group Captain Leonard Cheshire: VC, who had been Britain's official observer of the bombing and had watched it from the air. The other had watched it from the ground and had been lucky to survive, as he was only a mile away from the centre of the explosion. He was Geoffrey Sherring, a retired Lancashire businessman, who had been in Nagasaki in 1945 as a prisoner-of- war of the Japanese. Both, for different reasons, had been delighted by the drop- ping of the bomb. Cheshire believed, and still believes' that it brought a merciful end to the war with far less death and suffering than would otherwise have been the case. Sherring believed, and still believes, that it saved his life because he would otherwise have been murdered by the Japanese and that it was 'a kind of retribution to a cruel and treacherous people'. The people of Nagasaki, of whom 78,000 died as a result of the bomb, are understandably not in agreement with these views. Cheshire's earnest attempts to convince them that the destruction of their city had been a neces- sary price to pay 'for the removal of the scourge of world war from our earth' went down, if not like an atomic bomb, at least like a lead balloon. City officials visited him in his hotel and told him, with much bowing, that he would not be welcome at the annual Peace Ceremony which he had come to Nagasaki to attend. Only one of the Japanese survivors of the bomb, a woman with excellent English, would agree even to meet him. Mr Sherring, on the other hand, got a much friendlier reception, partly, perhaps, because he did not trumpet his views, but mainly because he had been under — rather than safely above — the bomb when it dropped. He found that, as a survivor, he was entitled to free medical treatment anywhere in Japan and took advantage of this facility to have a check-up which showed him free of after- effects. We were shown the usual gruelling film to remind us how terrible the after- effects could be. Even so, it was just about possible to accept Cheshire's view that continuation of the war by conventional means would have have resulted in even worse suffering. As to his deterrence argu- ment, he had better be right; for modern nuclear bombs are about 1,000 times more powerful than the one which fell on Naga- saki.

In the light of the Duke of Edinburgh's report last week on the housing crisis in Britain, Yorkshire Television's programme about the homeless on Monday was ex- tremely well-timed. It was the first in a series called From the Cradle to the Grave marking another 40th anniversary — this time of the founding of the British welfare state. Entitled Home Sweet Home, it re- ported on the plight of some 13,000 people in Britain who, for want of anywhere else to live, are housed by local authorities in bed-and-breakfast hotels. Their situation is a scandal from almost every point of view. They are housed at absurd cost to the tax-payer in conditions of revolting squalor and are, in many cases, ruthlessly exploited by crooked and unscrupulous landlords. While the landlords become millionaires on local authority money, their tenants sink into understandable despair. The pro- ducer of the programme, John Willis, deserves unstinting praise for the thor- oughness of his investigation. Television is such a cumbersome medium that it cannot, like a newspaper, nose its way into murky corners without attracting attention. Yet Mr Willis succeeded not only in identifying the villains and exploiters by name; he managed to go with his cameras into many a dark, bug-infested hotel room and inter- view their miserable victims. His case was triumphantly made. The Government should not be allowed to ignore it.