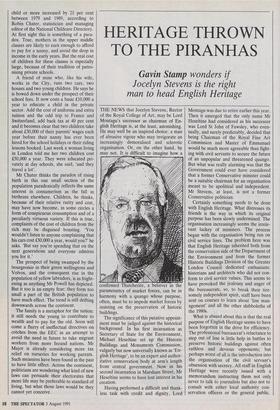 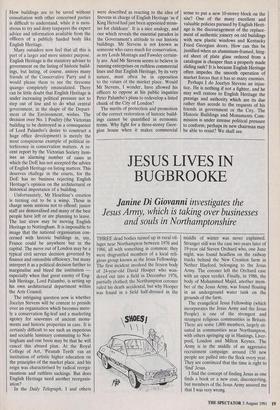 HERITAGE THROWN TO THE PIRANHAS

Jocelyn Stevens is the right man to head English Heritage

THE NEWS that Jocelyn Stevens, Rector of the Royal College of Art, may be Lord Montagu's successor as chairman of En- glish Heritage is, at the least, astonishing. He may well be an inspired choice: a man of abrasive vigour who may invigorate an increasingly demoralised and sclerotic organisation. Or, on the other hand, he may not. It is difficult to imagine how a confirmed Thatcherite, a believer in the paramountcy of market forces, can be in harmony with a quango whose purpose, often, must be to impede market forces by insisting on the preservation of historic buildings.

The significance of this putative appoint- ment must be judged against the historical background. In his first incarnation as Secretary of State for the Environment, Michael Heseltine set up the Historic Buildings and Monuments Commission, vulgarly but now universally known as 'En- glish Heritage', to be an expert and author- itative conservation body at arm's length from central government. Now in his second incarnation in Marsham Street, Mr Heseltine seems to have lost interest in his creation.

Having performed a difficult and thank- less task with credit and dignity, Lord Montagu was due to retire earlier this year. Then it emerged that the only name Mr Heseltine had considered as his successor was Lord St John of Fawsley, who even- tually, and surely predictably, decided that being Chairman of the Royal Fine Art Commission and Master of Emmanuel would be much more agreeable than fight- ing with civil servants to secure the future of an unpopular and threatened quango. But what was really alarming was that the Government could ever have considered that a former Conservative minister could be a suitable chairman for an organisation meant to be apolitical and independent. Mr Stevens, at least, is not a former Conservative politician.

Certainly something needs to be done with English Heritage. What distresses its friends is the way in which its original purpose has been slowly undermined. The organisation increasingly seems the irrele- vant lackey of ministers. The process began with the organisation being run on civil service lines. The problem here was that English Heritage inherited both from the conservation side of the Department of the Environment and from the former. Historic Buildings Division of the Greater London Council dedicated enthusiasts: historians and architects who did not con- form to civil service values. This seems to have provoked the jealousy and anger of the bureaucrats, so, to break their tire- somely independent spirit, staff have been sent on courses to learn about 'line man- agement' and all the other shibboleths of the 1980s.

What is absurd about this is that the real purpose of English Heritage seems to have been forgotten in the drive for efficiency.

The professional bureaucrat's reluctance to step out of line is little help in battles to preserve historic buildings against often ruthless and devious opponents; but perhaps worst of all is the introduction into the organisation of the civil servant's obsession with secrecy. All staff in English Heritage were recently issued with a memorandum instructing them not only never to talk to journalists but also not to consult with either local authority con- servation officers or the general public. How buildings are to be saved without consultation with other concerned parties is difficult to understand, while it is mon- strous to try and deny taxpayers the expert advice and information available from the officers of a publicly funded body like English Heritage.

Many outsiders now feel that all this is part of a larger and more sinister purpose.

English Heritage is the statutory adviser to government on the listing of historic build- ings, but listing, of course, annoys many friends of the Conservative Party and it would please them to see the tiresome quango completely emasculated. There can be little doubt that English Heritage is under increasing political pressure not to step out of line and to do what central government, in the shape of the Depart- ment of the Environment, wishes. The decision over No. 1 Poultry (the Victorian building to be destroyed as a consequence of Lord Palumbo's desire to construct a huge office development) is merely the most conspicuous example of political in- terference in conservation matters. A re- cent report by the Victorian Society item- ises an alarming number of cases in which the DoE has not accepted the advice of English Heritage on listing matters. This deserves challege in the courts, for the DoE has no business rejecting English Heritage's opinion on the architectural or historical importance of a building.

Unfortunately, Mr Heseltine's creation is turning out to be a wimp. Those in charge seem anxious not to offend; junior staff are demoralised and many of the best people have left or are planning to leave.

The last straw may be moving English Heritage to Nottingham. It is impossible to image that the national organisation con- cerned with historic buildings in, say, France could be anywhere but in the capital. The move out of London may be a typical civil service decision governed by finance and ostensible efficiency, but many interpret it as a political decision further to marginalise and bleed the institution especially when that great enemy of Eng- lish Heritage, Lord Palumbo, is setting up his own architectural department within the Arts Council.

The intriguing question now is whether Jocelyn Stevens will be content to preside over an organisation which becomes mere- ly a conservation fig-leaf and a marketing agency for souvenirs of ancient monu- ments and historic properties in care. It is certainly difficult to see such an imperious and sociable luminary commuting to Not- tingham and one boon may be that he will cancel this absurd plan. At the Royal College of Art, Piranah Teeth' ran an institution of artistic higher education on the principles of the market place, and his reign was characterised by radical reorga- nisations and ruthless sackings. But does English Heritage need another reorganis- ation?

In the Daily Telegraph, I and others were described as reacting to the idea of Stevens in charge of English Heritage as if King Herod had just been appointed minis- ter for childcare'. It is a nice analogy, and one which reveals the essential paradox in the Government's attitude to our historic buildings. Mr Stevens is not known as someone who cares much for conservation, as my Lords Montagu and Fawsley certain- ly are. And Mr Stevens seems to believe in running enterprises on ruthless commercial lines and that English Heritage, by its very nature, must often be in opposition to the values of the market place. Would Mr Stevens, I wonder, have allowed his officers to oppose at his public inquiries Peter Palumbo's plans to redevelop a listed chunk of the City of London?

The merits of protection and promotion of the correct restoration of historic build- ings cannot be quantified in economic terms. Why fight for a three-storey Geor- gian house when it makes commercial sense to put a new 10-storey block on the site? One of the many excellent and valuable policies pursued by English Herit- age is the discouragement of the replace- ment of authentic joinery on old buildings with new plastic windows and Kentucky Fried Georgian doors. How can this be justified when an aluminium-framed, hing- ed sheet of plate glass ordered from a catalogue is cheaper than a properly made sliding sash? It is because English Heritage often impedes the smooth operation of market forces that it has so many enemies. Perhaps I do Jocelyn Stevens an injus- tice. He is nothing if not a fighter, and he may well restore to English Heritage the prestige and authority which are its due rather than accede to the requests of his friends in government or the City. The Historic Buildings and Monuments Com- mission is under intense political pressure to conform; perhaps its new chairman may be able to resist? We shall see.