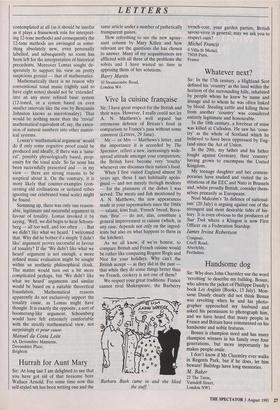 Sir: In the 17th century, a Highland Scot defined his 'country' as the land within the horizon of the surrounding hills, inhabited by people whom he knew by name and lineage and to whom he was often linked by blood. Stealing cattle and killing those from another 'country' was considered entirely legitimate and honourable.

In the 18th century, a forebear of mine was killed at Culloden. He saw his 'coun- try' as the whole of Scotland which he believed to have been oppressed by Eng- land since the Act of Union.

In the 20th, my father and his father fought against Germany, their 'country' having grown to encompass the United Kingdom.

My teenage daughter and her contem- poraries have studied and visited the in- stitutions of the EEC and Nato in Brussels and, whilst proudly British, consider them- selves primarily as Europeans.

Noel Malcolm's 'In defence of national- ism' (20 July) is arguing against one of the strongest and most desirable tides of his- tory. It is even obvious to the producers of Star Trek where a Klingon is now First Officer on a Federation Starship.