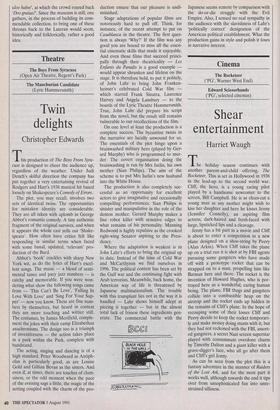 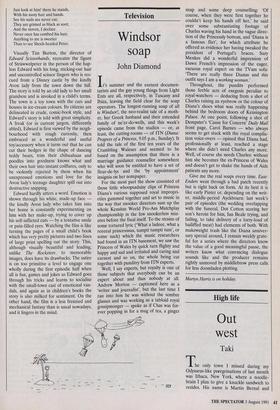 The holiday season continues with another parent-and-child offering, The Rocketeer. This is set in Hollywood in 1938 in the lead-up to the second world war. Cliff, the hero, is a young racing pilot played by a handsome newcomer to the screen, Bill Campbell. He is as clean-cut a young man as any mother might wish to kiss her daughter and here he kisses Jenny (Jennifer Connelly), an aspiring film actress, dark-haired and fresh-faced with large, lipsticked lips and a cleavage.

Jenny has a bit part in a movie and Cliff is about to enter a competition in a new plane designed on a shoe-string by Peevy (Alan Arkin). When Cliff takes the plane up on a trial run it is shot at by FBI agents pursuing some gangsters who have made off with a prototype rocket that can be strapped on to a man, propelling him like Batman here and there. The rocket is the invention of Howard Hughes, who is por- trayed here as a wonderful, caring human being. The plane, FBI thugs and gangsters collide into a combustible heap on the airstrip and the rocket ends up hidden in the remains of Cliffs plane. In the hope of recouping some of their losses Cliff and Peevy decide to keep the rocket temporari- ly and make money doing stunts with it, but they had not reckoned with the FBI, assort- ed gangsters, a secret Nazi screen superstar played with consummate overdone charm by Timothy Dalton and a giant killer with a grave-digger's face, who all go after them and Cliff's girl Jenny.

As can be seen from the plot this is a fantasy adventure in the manner of Raiders of the Lost Ark, and for the most part it works well, although towards the end it tips over from unsophisticated fun into unre- strained silliness.

Just look at him! there he stands, With his nasty hair and hands. See his nails are never cut; They are grimed as black as soot; And the sloven, I declare Never once has combed his hair; Anything to me is sweeter Than to see Shock-headed Peter.

Visually Tim Burton, the director of Edward Scissorhands, recreates the figure of Strilwwelpeter in the person of the hap- less Edward with his long, sticking-out hair and uncontrolled scissor fingers who is res- cued from a Disney castle by the kindly Avon lady from the town down the hill. The story is told by an old lady to her small grandson and is invoked in a child's terms. The town is a toy town with the cars and houses in ice-cream colours. Its citizens are delineated in crude, comic-book style, and Edward's story is told with great simplicity. A freak (or in current jargon, differently abled), Edward is first viewed by the neigh- bourhood with rough curiosity, then embraced as a wonderful and useful toy/accessory when it turns out that he can cut their hedges in the chape of dancing teddy bears, trim their chihuahuas and poodles into goodness knows what and their own hair into instant coiffures, only to he violently rejected by them when his unexpressed emotions and love for the Avon lady's teenage daughter spill out into destructive snipping.

Edward hardly utters a word. Emotion is shown through his white, made-up face the kindly Avon lady who takes him into her home is constantly experimenting on him with her make-up, trying to cover up his self-inflicted cuts — by a tentative smile or pain-filled eyes. Watching the film is like turning the pages of a small child's book which has very pretty pictures and two lines of large print spelling out the story. This, although visually beautiful and leading, unlike The Rocketeer, to memorable images, does have its drawbacks. The satire is on too primitive a level to engage one wholly during the first episodic half when all is fun, games and jokes as Edward goes through his tricks and learns to socialise with the small-town cast of emotional van- dals, and again as in children's books the story is also milked for sentiment. On the other hand, the film is a less frenzied and mechanical fantasy than is usual nowadays, and it lingers in the mind.