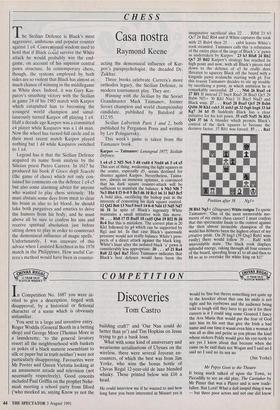 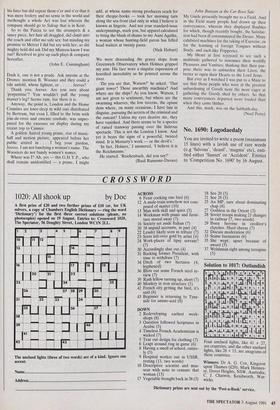 In Competition No. 1687 you were in- vited to give a description, tinged with disapproval, by a historical or fictional character of a scene which is obviously unfamiliar.

You sent in a large and inventive entry. Roger Woddis (General Booth in a betting shop) and George Moor (Thomas More in a launderette; `to the general lavatory resort all the neighbourhood with baskets or pokes of a black materie resemblant to silk or paper but in truth neither') were not particularly disapproving. Favourites were Mr Pooter and Queen Victoria looking at an amusement arcade and television (not necessarily respectively). Good conceits included Paul Griffin on the prophet Nehe- miah meeting a school party from Ilford ('who mocked us, saying Know ye not the building craft?' and 'Our Nan could do better than ye') and Tim Hopkins on Jesus trying to get a bank loan.

What with some kind of anniversary and wearisome serialisations of Ulysses on the wireless, there were several Joycean en- counters, of which the best was from Jim Yorke, who wins the bonus bottle of Chivas Regal 12-year-old de luxe blended whisky. Those printed below win £16 a head.

Mr Pepys Goes to the Theatre

It being much talked of upon the Town, to Piccadilly to see an old play, The Caretaker by Mr Pinter that was a Player and is now trade- fallen. But Lord! What a dull insipid thing it was — but three poor actors and not one did know his lines but did repeat them o'er and o'er that it was mere foolery and no sense in the world and methought a whole Act was lost wherein the company should go to Sidcup that is in Kent.

So to the Piazza to see the strumpets & a saucy piece, her hair all draggled, did climb into the coach and offer me safe sex: but minding my promise to Mercer I did but toy with her, so she mighty bold did ask Did my Mistress know I was out? Resolved to give up such plays & company hereafter.

(John E. Cunningham) Dash it, one is not a prude. Ask anyone at the Drones: mention B. Wooster and they could a tale unfold, whose lightest, er Jeeves?

Thank you, Jeeves. Are you sure about 'porpentine'? You wouldn't pull the young master's leg? Seems rum, but there it is.

Anyway, the point is, London and the Home Counties are knee-deep in wild oats distributed by Bertram, but even I, filled to the brim with joie-de-vivre and entente cordiale, was unpre- pared for the excesses on display during my recent trip to Cannes.

A golden- haired young prune, star of music- hall and motion picture, appeared before her public attired in . . . . I beg your pardon, Jeeves. I am not bandying a woman's name. The Woosters do not bandy women's names.

Where was I? Ah, yes — this G.H.Y.P., who shall remain unidentified — a prune, I might add, at whose name strong producers reach for their cheque-books — took her morning turn along the sea-front clad only in what I believe is known as lingerie. And not your standard-issue underpinnings, mark you, but apparel calculated to bring the blush of shame to my Aunt Agatha, a woman whose hunting-field patois has felled head waiters at twenty paces.

(Nick Hobart) We were descending the grassy slope from Greenwich Observatory when Holmes gripped my arm. His face wore a singular expression of horrified incredulity as he pointed across the river.

`Do you see that, Watson?' he asked. 'That giant tower? Those unearthly machines? And where are the ships? As you know, Watson, I am not given to sentiment, but where are the swarming wharves, the low taverns, the opium dens where, on many occasions, I have lain in disguise, pursuing the secrets of the criminal and the outcast? Unless my eyes deceive me, they have vanished. And there seems to be a species of raised tramway passing over the hideous spectacle. This is not the London I know. And yet it bears the signs of a powerful, twisted mind. It is Moriarty's work — or the devil's.'

`In fact, Holmes,' I answered, 'I believe it is the Reichmanns.'

He started. `Reichenbach, did you say?'

(Basil Ransome-Davies) John Bunyan at the Car-Boot Sale My Guide presently brought me to a Field. And in the Field many people had drawn up their conveyances, wherein they displayed Baubles for which, though recently bought, the Satisfac- tion had been ill consummated the Desire. Many exhibited machines for the taking of Exercise, or for the learning of foreign Tongues without Study, and such-like Fripperies.

My Heart at first rejoyced to see such a multitude gathered to renounce their worldly Pleasures and Vanities; thinking that their pur- pose there was to unburden their Lives, the better to open their Hearts to the Lord Jesus.

But ever as I watched I was put to a Maze to see that those people who were at the greatest unburdening of Goods were the most eager at gathering the Goods shed by others. So that many conveyances departed more loaded than when they came thither.

And this, mark, was on the Sabbath-day. (Noel Petty)