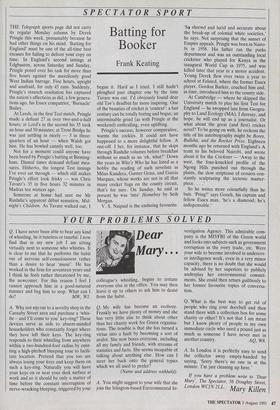 At Leeds, in the first Test match, Pringle made a defiant 27 in over two-and-a-half hours; at Lord's in the second his 35 took an hour and 50 minutes; at Trent Bridge he was just settling in nicely — 3 in three- quarters of an hour — when Walsh got him. He has bowled cannily well, too.

Not for a moment could anyone have been bored by Pringle's batting at Birming- ham. Dismal times demand defiant mea- sures. Hitherto, the longest Test innings I've ever sat through — which still makes Pringle's effort look frisky — was Chris Tavare's 35 in five hours 32 minutes in Madras ten winters ago.

Someone at home had sent me Mr Rushdie's apparent debut sensation, Mid- night's Children. As Tavare walked out, I

began it. Hard as I tried, I still hadn't ploughed past chapter one by the time Tavare was out. I'd obviously found dear old Tav's deadbat far more inspiring. One of the beauties of cricket is 'context': a fast century can be totally boring and bogus; an interminable grind (as with Pringle at the weekend) enthralling, even uplifting. Pringle's success, however comparative, warms the cockles. It could not have happened to a more delightful fellow. A one-off. I bet, for instance, that he skips through Rushdie volumes before breakfast without so much as an 'eh, what?' Down the years in Who's Who he has listed as a hobby the reading of such novelists as Milan Kundera, Gunter Grass, and Garcia Marques, whose works are not in all that many cricket bags on the county circuit, that's for sure. On Sunday, he said at present he was 'into' Homeboy by Seth Morgan. V. S. Naipaul is the enduring favourite. *SQ shrewd and lucid and accurate about the break-up of colonial white societies,' he says. Not surprising that the sunset of Empire appeals. Pringle was born in Nairo- bi in 1958. His father ran the parks department and was an outstanding local cricketer who played for Kenya in the inaugural World Cup in 1975, and was killed later that year in a motor accident. Young Derek flew over twice a year to school at Felsted, where the former Essex player, Gordon Barker, coached him and, in time, introduced him to the county side. At Cambridge — where he skipped the University match to play his first Test for England — he swopped late from Geogra- phy to Land Ecology (MA). I daresay, and hope, he will end up as a journalist. Or what about the great (and first) cricket novel? To be going on with, he reckons the title of his autobiography might be Bores, Bullshit, and the Booker Prize. Eighteen months ago he returned with England's A team to his beloved Nairobi, and wrote about it for the Cricketer — 'Away to the west, the four-knuckled profile of the Ngong Hills punched out through the plains, the slow striptease of erosion con- stantly sculpturing the tectonic master- piece. . .

So he writes more colourfully than he bats. `Pring?' says Gooch, his captain and fellow Essex man, 'he's a diamond; he's indispensable.'