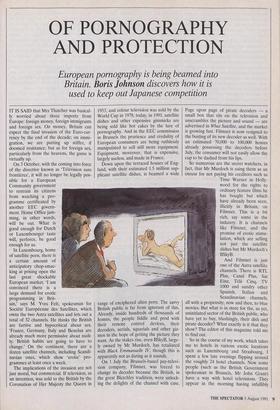 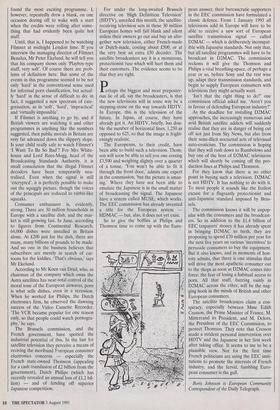 OF PORNOGRAPHY AND PROTECTION

IT IS SAID that Mrs Thatcher was basical- ly worried about three imports from Europe: foreign money, foreign immigrants and foreign sex. On money, Britain can expect the final invasion of the Euro-cur- rency by the end of the decade; on immi- gration, we are putting up stiffer, if doomed resistance; but as for foreign sex, particularly from the heavens, the game is virtually up.

The implications of the invasion are not just moral, but commercial. If television, as an invention, was sold to the British by the Coronation of Her Majesty the Queen in

1953, and colour television was sold by the World Cup in 1978, today, in 1991, satellite dishes and other expensive gimmicks are being sold like hot cakes by the lure of pornography. And in the EEC commission in Brussels the prurience and credulity of European consumers are being ruthlessly manipulated to sell still more equipment. Equipment, moreover, that is expensive, largely useless, and made in France.

Down upon the terraced houses of Eng- land, with their estimated 1.5 million sup- plicant satellite dishes, is beamed a wide

On 1 July the Brussels-based pay-televi- sion company, Filmnet, was forced to change its decoder because the British, in the great Bletchley tradition, were unlock- ing the delights of the channel with ease.

Page upon page of pirate decoders — a small box that sits on the television and unscrambles the picture and sound — are advertised in What Satellite, and the market is growing fast. Filmnet is now resigned to the busting of its new decoder as well. With an estimated 70,000 to 100,000 homes already possessing the decoders before July, the consumer will not easily allow the cup to be dashed from his lips.

So in the course of my work, which takes me to hotels in various exotic locations such as Luxembourg and Strasbourg, I spent a few late evenings flipping around the roughly 24 hotel channels. Now some people (such as the British Government spokesman in Brussels, Mr John Grant) have a way with hotel televisions. They appear in the morning having infallibly found the most exciting programme. I, however, repeatedly drew a blank, on one occasion dozing off to wake with a start when the credits were rolling after some- thing that had evidently been quite hot stuff.

If Filrnnet is anything to go by, and if British viewers are watching it and other programmes in anything like the numbers suggested, then public morals in Britain are very far advanced down the slippery slope. Is your child really safe to watch Filmnet's `I Want To Be So Bad'? For Mrs White- house and Lord Rees-Mogg, head of the Broadcasting Standards Authority, it is small consolation that the illegal Filmnet decoders have been temporarily neu- tralised. Even when the signal is still `encrypted', it is perfectly possible to make out the squiggly picture, though the voices of the principals are reduced to rabbit-like squeaks.

Consumer enthusiasm is, evidently, strong. There are 30 million households in Europe with a satellite dish, and the mar- ket is still growing fast. In June, according to figures from Continental Research, 64,000 dishes were installed in Britain alone. At £200 just for the dish, there are many, many billions of pounds to be made. And no one in the business believes that subscribers are merely in search of car- toons for the kiddies. 'That's obvious,' says Mr Ekelund.

The Brussels commission, and the French government, have spotted the industrial potential of this. In the lust for satellite television they perceive a means of reviving the moribund European consumer electronics concerns — especially the French state-owned Thomson (appealing for a cash transfusion of £2 billion from the government), Dutch Philips (which has recently revealed an annual loss of £1.2 bil- lion) — and of fending off superior Japanese competition. For under the long-awaited Brussels directive on 'High Definition Television' (HDTV), unveiled this month, the satellite- receiving television sets in those 30 million European homes will fall blank and silent unless their owners go out and buy an alto- gether new television, either French-made or Dutch-made, costing about £500, or at the very best an extra £50 decoder. The satellite broadcasters say it is a monstrous, protectionist ruse which will hurt them and their customers. The evidence seems to be that they are right.

Perhaps the biggest and most preposter- ous lie of all, say the broadcasters, is that the new televisions will in some way be a stepping-stone on the way towards HDTV. In Europe, this is the television of the future. In Japan, of course, they have already got it. An HDTV, briefly, has dou- ble the number of horizontal lines, 1,250 as opposed to 625, so that the image is fright- eningly realistic.

The Europeans, to their credit, have been able to build such a television. Thom; son will soon be able to sell you one costing £3,500 and weighing slightly over a quarter of a tonne. 'You won't be able to fit it through the front door,' admits one expert in the commission, 'but the picture is amaz- ing.' Where they have not been able to emulate the Japanese is in the small matter of broadcasting the signal. The Japanese have a system called MUSE, which works. The EEC commission has already invented a title for the European system — HDMAC — but, alas, it does not yet exist.

pean answer, their bureaucratic supporters in the EEC commission have formulated a classic defence. From 1 January 1993 all televisions sold in Europe will have to be able to receive a new sort of European satellite transmission signal — called D2MAC — which is deliberately incompat- ible with Japanese standards. Not only that, but all satellite programmes will have to be broadcast in D2MAC. The commission reckons it will give the Thomson and Philips a vital breathing-space, of perhaps a year or so, before Sony and the rest wise up, adapt their transmission standards, and begin to supply European consumers with televisions they might actually want.

`Isn't that the right thing to do?' one commission official asked me. 'Aren't you in favour of defending European industry?'

As the deadline for installing D2MAC approaches, the increasingly numerous and avid British satellite addicts will suddenly realise that they are in danger of being cut off not just from Sky News, but also from their semi-illicit nocturnal acts of televisual auto-eroticism. The commission is hoping that they will rush down to Rumbelows and buy one of the host of D2MAC televisions which will shortly be coming off the pro- duction lines at Philips and Thomson.

For they know that there is no other point in buying such a television. D2MAC is not HDTV. It has nothing to do with it. To most people it sounds like the frailest excuse for a flagrantly protectionist and anti-Japanese standard imposed by Brus- sels.

The commission knows it will be unpop- ular with the consumers and the broadcast- ers. So in addition to the £1.4 billion of EEC taxpayers' money it has already spent in bringing D2MAC to birth, they are proposing to spend £70 million per year for the next five years on various 'incentives' to persuade consumers to buy the equipment. But it also knows, and in moments of hon- esty admits, that there is one stimulus that will drive the most apathetic consumer out to the shops as soon as D2MAC comes into force: the fear of losing a habitual access to porn. All that stuff, buzzing vainly in D2MAC across the ether, will be the nag- ging hook in the minds of British and other European consumers.

The satellite broadcasters claim a con- spiracy, especially between Mme Edith Cresson, the Prime Minister of France, M. Mitterrand its President, and M. Delors, the President of the EEC Commission, to protect Thomson. They note that Cresson made a strident personal intervention over HDTV and the Japanese in her first week after taking office. It seems to me to be a plausible view. Not for the first time French politicians are using the EEC insti- tutions to promote the interests of French industry, and the fervid, fumbling Euro- pean consumer is the gull.

Boris Johnson is European Community Correspondent of the Daily Telegraph.