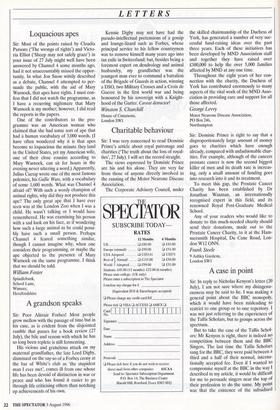 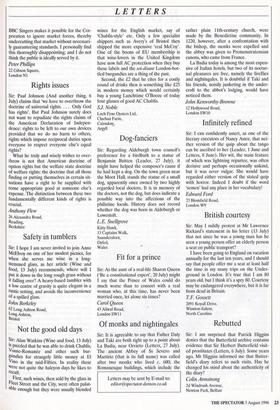 A case in point

Sir: In reply to Nicholas Kenyon's letter (20 July), I am not sure where my disingenu- ousness may be said to lie. I was making a general point about the BBC monopoly, which it would have been misleading to restrict to one group or to one repertory. I was not just referring to the experiences of the Tallis Scholars, but to groups across the spectrum.

But to take the case of the Tallis Schol- ars: Mr Kenyon is right, there is indeed no competition between them and the BBC Singers. The last time the Tallis Scholars sang for the BBC, they were paid between a third and a half of their normal, interna- tionally accepted fee. Even if I wanted to compromise myself at the BBC in the way I described in my article, it would be difficult for me to persuade singers near the top of their profession to do the same. My point was that the existence of the subsidised BBC Singers makes it possible for the Cor- poration to ignore market forces, thereby undercutting that market without necessari- ly guaranteeing standards. I personally find this thoroughly disappointing; and I do not think the public is ideally served by it.