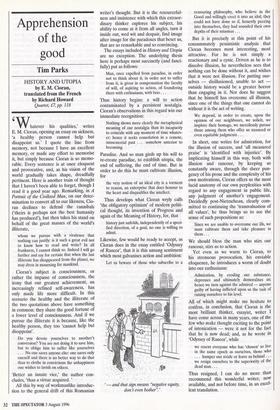 HISTORY AND UTOPIA by E. M. Cioran, translated from the French by Richard Howard Quartet, £7, pp. 118

Whatever his qualities,' writes E. M. Cioran, opening an essay on sickness, 'a healthy person cannot help but disappoint us.' I quote the line from memory, not because I have an excellent memory, or made any effort to memorise it, but simply because Cioran is so memo- rable, Every sentence is at once eloquent and provocative, and, as his vision of the world gradually takes shape, dreadfully pertinent. Here is another train of thought that I haven't been able to forget, though I read it a good year ago. Remarking, in A Portrait of the Civilised Man, on our deter- mination to convert all to our likeness, Cio- ran declines to defend the cannibals ('theirs is perhaps not the best humanity has produced'), but then takes his stand on behalf of the great masses of the world's illiterate,

whom we pursue with a virulence that nothing can justify: is it such a great evil not to know how to read and write? In all frankness, I cannot think so. Indeed I will go further and say for certain that when the last illiterate has disappeared from the planet, we may dress in mourning for mankind.

Cioran's subject is consciousness, or rather the impasse of consciousness, the irony that our greatest achievement, an increasingly refined self-awareness, has only made life more difficult. In this scenario the healthy and the illiterate of the two quotations above have something in common: they share the good fortune of a lower level of consciousness. And if we pursue the illiterate it is because, like the healthy person, they too 'cannot help but disappoint'.

Do you devote yourselves to another's conversion? You are not doing it to save him, but to oblige him to suffer like yourselves ... No one saves anyone else: one saves only oneself and there is no better way to do that than to clothe in convictions the unhappiness one wishes to lavish on others.

'Better an innate vice,' the author con- cludes, 'than a virtue acquired. '

All this by way of workmanlike introduc- tion to the general drift of this Romanian writer's thought. But it is the resourceful- ness and insistence with which this extraor- dinary thinker explores his subject, his ability to come at it from all angles, turn it inside out, wed wit and despair, find image after image for the paradoxes that beset us, that are so remarkable and so convincing.

The essays included in History and Utopia are no exception. The underlying thesis here is perhaps most succinctly (and fanci- fully) put as follows:

Man, once expelled from paradise, in order not to think about it, in order not to suffer from it, is given in compensation the faculty of will, of aspiring to action, of foundering there with enthusiasm, with brio ...

Thus history begins: a will to action contaminated by a persistent nostalgia. Cioran's observations in this regard win our immediate recognition: Nothing shows more clearly the metaphysical meaning of our nostalgia than its incapacity to coincide with any moment of time whatev- er, hence it seeks consolation in a remote, immemorial past ... somehow anterior to becoming.

Paradise. And so man girds up his will to re-create paradise, to establish utopia, the end of suffering, the end of time. But in order to do this he must cultivate illusion, for the very notion of an ideal city is a torment to reason, an enterprise that does honour to the heart and disqualifies the intellect.

Thus develops what Cioran wryly calls 'the obligatory optimism' of modern politi- cal thought, its invention of Progress and again of the Meaning of History, for, that history just unfolds, independently of a speci- fied direction, of a goal, no one is willing to admit.

Likewise, few would be ready to accept, as Cioran does in the essay entitled 'Odyssey of Rancor', that it is this unsung sentiment which most galvanises action and ambition:

Let us beware of those who subscribe to a don't even bother".' lent translation.

reassuring philosophy, who believe in the Good and willingly erect it into an idol; they could not have done so if, honestly peering into themselves, they had sounded their own depths of their miasmas ...

But it is precisely at this point of his consummately pessimistic analysis that Cioran becomes most interesting, most attractive. For he is not simply a reactionary and a cynic. Driven as he is to dissolve illusion, he nevertheless sees that nothing can be done without it, and wishes that it were not illusion. For putting our- selves — disillusioned, unable to act outside history would be a greater horror than engaging in it. Nor does he suggest that he himself has overcome all illusion, since one of the things that one cannot do without it is the act of writing.

We depend, in order to create, upon the opinion of our neighbours, we solicit, we implore their homage, we mercilessly pursue those among them who offer us nuanced or even equitable judgments ...

In short, one writes for admiration, for the illusion of success, and 'all measured praise' is 'identified with injustice'. By implicating himself in this way, both with illusion and rancour, by keeping us constantly aware, through the sheer pun- gency of his prose and the complexity of his own motivations, Cioran offers us the most lucid anatomy of our own perplexities with regard to any engagement in public life, any judgment of another's engagement. Decidedly post-Nietzschean, clearly com- mitted to continuing the 'transvaluation of all values', he thus brings us to see the sense of such propositions as:

Since we are unable to overcome our ills, we must cultivate them and take pleasure in them ...

We should bless the man who stirs our rancour, stirs us to action.

Yet even as we warm to Cioran, to his strenuous provocation, his enviable eloquence, he introduces a worm of doubt into our enthusiasm: Admiration, by eroding our substance, depresses and ultimately demoralises us: hence we turn against the admired — anyone guilty of having inflicted upon us the task of raising ourselves to his level.

All of which might make me hesitate to confess, in conclusion, that Cioran is the most brilliant thinker, essayist, writer I have come across in many years, one of the few who make thought exciting to the point of intoxication — were it not for the fact that he is now dead; and, as he wrote in 'Odyssey of Rancor', while

we resent everyone who has 'chosen' to live in the same epoch as ourselves, those who ... hamper our stride or leave us behind . we resign ourselves to the superiority of the dead man ...

Thus resigned, I can do no more than recommend this wonderful writer, now

— and that sign means "negative equity, available, and not before time, in an excel-