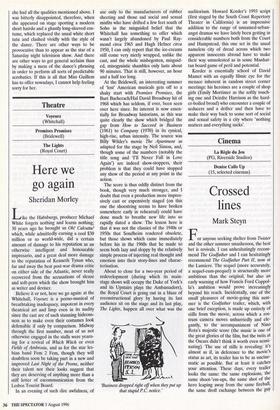 Like the Habsburgs, producer Michael White forgets nothing and learns nothing; 30 years ago he brought us Ohl Calcutta! which, while admittedly earning a cool $30 million or so world-wide, did a certain amount of damage to his reputation as an otherwise intelligent and honourable impresario, and a great deal more damage to the reputation of Kenneth Tynan who, far and away the best post-war drama critic on either side of the Atlantic, never really recovered from the accusations of sleaze and soft-porn which the show brought him as writer and deviser.

Believe it or not, here we go again: at the Whitehall, Voyeurs is a porno-musical of breathtaking inadequacy, impotent in every theatrical art and limp even in its nudity since the cast are of such stunning hideous- ness as to make even their costumes look defensible if only by comparison. Midway through the first number, most of us not otherwise engaged in the stalls were yearn- ing for a revival of Which Witch or even Fields of Ambrosia, and as for the star les- bian band Fern 2 Fenn, though they will doubtless soon be taking part in a new and improved Last Night of the Proms, neither their talent nor their looks suggest that they are deserving of anything more than a stiff letter of excommunication from the Lesbos Tourist Board.

In an evening of such dire awfulness, of

use only to the manufacturers of rubber sheeting and those sad social and sexual misfits who have drifted a few feet south of Soho in the misguided belief that the Whitehall has something to offer which wasn't largely abandoned by Paul Ray- mond circa 1965 and Hugh Hefner circa 1950, I can only report that the ice-creams still come very nicely wrapped, unlike the cast, and the whole misbegotten, misguid- ed, misogynistic shambles only lasts about 90 minutes. That is still, however, an hour and a half too long.

At the Bridewell, an interesting summer of 'lost' American musicals gets off to a shaky start with Promises Promises, the Burt Bacherach/Hal David Broadway hit of 1968 which has seldom, if ever, been seen over here since. Its interest is now essen- tially for Broadway historians, as this was quite clearly the show which bridged the gap from How to Succeed in Business (1961) to Company (1970) in its cynical, high-rise, urban intensity. The source was Billy Wilder's movie The Apartment as adapted for the stage by Neil Simon, and, though some of the numbers (notably the title song and `I'll Never Fall in Love Again') are indeed show-stoppers, their problem is that they could have stopped any show of the period at any point in the action.

The score is thus oddly distinct from the book, though very much stronger, and I doubt that even a production more impres- sively cast or expensively staged (on this one the shoestring seems to have broken somewhere early in rehearsal) could have done much to breathe new life into so rapidly dated a show. The lesson here is that it was not the classics of the 1940s or 1950s that Sondheim rendered obsolete, but those shows which came immediately before his in the 1960s that he made to seem both lazy and sloppy by the relatively simple process of injecting real thought and emotion into their story-lines and charac- terisation.

About to close for a two-year period of redevelopment (during which its main- stage shows will occupy the Duke of York's and its Upstairs plays the Ambassadors), the Royal Court is going out in a blaze of reconstructional glory by having its last audience sit on the stage and its last play, The Lights, happen all over what was the

Business dropped right off when they put up that stupid P.C. notice.' auditorium. Howard Korder's 1993 script (first staged by the South Coast Repertory Theater in California) is an impressive addition to the range of unnamed-urban- angst dramas we have lately been getting in considerable numbers both from the Court and Hampstead, this one set in the usual nameless city of dread across which two apparent innocents abroad have to make their way unmolested as in some Manhat- tan board game of peril and potential.

Korder is essentially school of David Mamet with an equally filmic eye for the menace inherent in random street corner meetings: his heroines are a couple of shop girls (Emily Mortimer as the softly touch- ing one and Deirdre Harrison as the hard- er-boiled broad) who encounter a couple of seducers and a drifter and then have to make their way back to some sort of social and sexual safety in a city where 'nothing matters and everything sucks'.