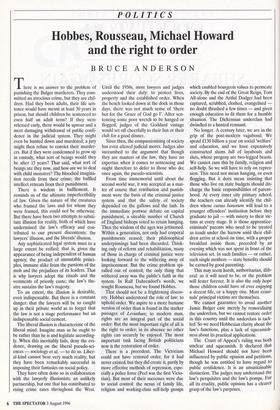 Hobbes, Rousseau, Michael Howard and the right to order

There is no answer to the problem of punishing the Bulger murderers. They com- mitted an atrocious crime, but they are chil- dren. Had they been adults, their life sen- tence would have meant at least 30 years in prison, but should children be sentenced to even half an adult term? If they were released early, there would be uproar and a most damaging withdrawal of public confi- dence in the judicial system. They might even be hunted down and murdered; a jury might then refuse to convict their murder- ers. But if they were condemned to grow up in custody, what sort of beings would they be after 15 years? That said, what sort of beings are they now, and how are we to deal with child monsters? The bloodied imagina- tion recoils from their crime; the baffled intellect retreats from their punishment.

There is wisdom in bafflement. It reminds us of the ultimate imperfectibility of law. Given the nature of the creatures who framed the laws and for whom they were framed, this could not be otherwise. But there have been two attempts to substi- tute illusion for reality, both of which have undermined the law's efficacy and con- tributed to our present discontents: the lawyers' illusion, and the liberals' illusion.

Any sophisticated legal system must to a large extent be reified; that is, given the appearance of being independent of human agency; the product of immutable princi- ples, immune alike from the passions of the mob and the prejudices of its leaders. That is why lawyers adopt the rituals and the vestments of priestly caste; the law's the- atre sustains the law's majesty.

To an extent, the illusion is desirable, even indispensable. But there is a constant danger: that the lawyers will be so caught up in their private world as to forget that the law is not a stage performance but an indispensable social cement.

The liberal illusion is characteristic of the liberal mind. Imagine man as he ought to be rather than he is and legislate according- ly. When this inevitably fails, deny the evi- dence, drawing on the liberal pseudo-sci- ences — sociology et al. — to do so. Liber- al-kind cannot bear very much reality; but they have been remarkably successful in imposing their fantasies on social policy.

They have often done so in collaboration with the lawyerly illusionists; an unlikely partnership, but one that has contributed to rising crime rates throughout the West. Until the 1950s, most lawyers and judges understood their duty: to protect lives, property and the established order. When the bench looked down at the dock in those days, there was not much sense of `there but for the Grace of God go I'. After sen- tencing some poor wretch to be hanged or flogged, judges of the Goddard vintage would set off cheerfully to their Inn or their club for a good dinner.

Since then, the compassionising of society has even altered judicial mores. Judges also succumbed to the argument that though they are masters of the law, they have no expertise when it comes to sentencing and ought therefore to defer to those who do; once again, the pseudo-scientists.

From time immemorial until about the second world war, it was accepted as a mat- ter of course that retribution and punish- ment were the basis of the criminal justice system and that the safety of society depended on the gallows and the lash. In the immediate postwar debate on capital punishment, a sizeable number of Church of England bishops voted to retain hanging. Then the wisdom of the ages was jettisoned. Within a generation, not only had corporal punishments ceased; their philosophical underpinnings had been discarded. Think- ing only of reform and rehabilitation, many of those in charge of criminal justice were looking forward to the withering away of imprisonment. But the crime problem spi- ralled out of control; the only thing that withered away was the public's faith in the system. In Ralf Dahrendorf s words, we sought Rousseau, but we found Hobbes.

That should not be a frightening discov- ery. Hobbes understood the role of law: to uphold order. We aspire to a more humane version of order than is found in the starker passages of Leviathan; to modern man, rights are an integral part of the social order. But the most important right of all is the right to order; in its absence no other rights can securely be enjoyed. The most important task facing British politicians now is the restoration of order.

There is a precedent. The Victorians could not have restored order, for it had never existed, but they did create it, partly by more effective methods of repression, espe- cially a police force (Peel was the first Victo- rian). But most of their successes were due to social control: the nexus of family life, religion and working-class self-help groups which enabled bourgeois values to permeate society. By the end of the Great Reign, Tom All-alone and the Artful Dodger had been captured, scrubbed, clothed, evangelised no doubt thrashed a few times — and given enough education to fit them for a humble situation. The Dickensian underclass had dwindled to a hunted remnant.

No longer. A century later, we are in the grip of the post-modern vagabond. We spend £130 billion a year on social 'welfare' and education, and we have expensively constructed slums full of layabouts and sluts, whose progeny are two-legged beasts. We cannot cure this by family, religion and self-help. So we will have to rely on repres- sion. This need not mean hanging, or even flogging. But it does mean insisting that those who live on state budgets should dis- charge the basic responsibilities of parent- hood. At every inner city primary school, the teachers can already identify the chil- dren whose cursus honorum will lead to a younger offenders' institution before they graduate to jail — with misery to their vic- tims at every stage. It is those apprentice- criminals' parents who need to be treated as toads under the harrow until their chil- dren arrive at school on time, with a proper breakfast inside them, preceded by an evening which was not spent in front of the television set. In such families — or rather, such single mothers — state benefits should be earned by good parenting.

This may seem harsh, authoritarian, illib- eral: so it will need to be, or the problem will fester forever. It is also the only hope those children could have of ever enjoying a decent life, or a happy one. Most crimi- nals' principal victims are themselves.

We cannot guarantee to avoid another Jamie Bulger case merely by remoralising the underclass, but we cannot restore order in this country until the underclass is tack- led. So we need Hobbesian clarity about the law's functions, plus a lack of squeamish- ness about its practical applications. The Court of Appeal's ruling was both unclear and squeamish. It declared that Michael Howard should not have been influenced by public opinion and petitions, though he was entitled to have regard to public confidence. It is an unsustainable distinction. The judges may understand the law's perquisites and the law's pomps. For all its crudity, public opinion has a clearer grasp of the law's purposes.