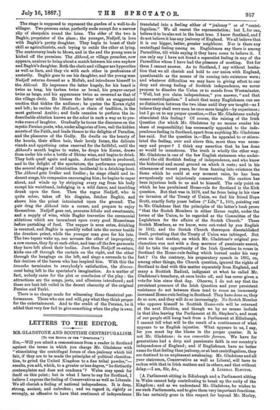 The stage is supposed to represent the garden of a

well-to-do villager. Two persons enter, perfectly nude except for a narrow slip of sheepskin round the loins. The elder of the two is Baghir, proprietor of the place; the younger, Nedjeff, in love with Baghir's pretty daughter. They begin to boast of their skill as agriculturists, each trying to outdo the other at lying. The controversy leads to blows, and in the end the young man is kicked off the premises. The 'Mond, or village preacher, now appears, anxious to bring about a match between his own nephew and Baghir's daughter. Both the cleric and villager are hypocrites as well as liars, and they vie with each other in professions of austerity. Baghir goes to see his daughter, and the young man

• Nedjeff returns dressed as a Mollah, and introduces himself to the Akhond. He impresses the latter hugely, for his beard is twice as long, his turban twice as broad, his prayer-carpet twice as large, and his appearance twice as reverend as that of the village cleric. He blesses the latter with an exaggerated unction that tickles the audience; he quotes the Koran right and left ; he recites the Hediasch, or chain of tradition, in the most guttural Arabic ; and Suds occasion to perform the in- describable ablution known as the ceded in such a way as to pro- voke roars of laughter. Gradually he turns the discourse on the mystic Persian poets, who, under allegories of love, veil the hidden secrets of the Faith, and leads thence to the delights of Paradise, and the pleasures of the Godly. He dwells on the beauty of the houris, their silken hair, their lovely forme, the delicate viands and appetising eates reserved for the faithful, until the Akhond's mouth begins to water, he drops his Koran, draws from under his robe a bottle of Shiraz wine, and begins to drink. They both quaff again and again. Another bottle is produced, and to the delight of the spectators, the performers represent the several stages of intoxication incidental to a drinking-bout. The Akhond gets livelier and livelier ; he sings ribald and in- decent songs, his companion encouraging him; he begins to caper about, and winds up by stripping every rag from his body except his waistband, indulging in a wild dance, and tumbling drunk upon the floor. Then the rogue Nedjeff, who is quite sober, takes off his disguise, fetches Baghir, and shows him the priest intoxicated upon the ground. The pair drag the Akhond into a corner, and prepare to enjoy themselves. Nedjeff goes out, procures kibabs and sweetmeats, and a supply of wine, while Baghir travesties the ceremonial ablations which are incumbent upon every good Mussulman before partaking of food. The supper is soon eaten, drinking is resumed, and Baghir is speedily rolled into the corner beside the drunken priest, while the younger man goes for his late. The two topers wake up, one accuses the other of impropriety, .a row ensues, they fly at each other, and tear off the few garments they have left about their bodies. Just then Nedjeff re-enters, licks one off through the curtain on the right, and the other through the hangings on the left, and sings a serenade to the fair denizen of the harem who has inspired him. With this the &mocha terminates to everybody's satisfaction, the dinoue- ntent being left to the spectator's imagination. As a matter of fact, nobody cares for the plot or conclusion of the play; the attractions are the songs, jests, and allusions introduced; and these are best left veiled in the decent obscurity of the original Persian and Turk.

There is no charge made for witnessing these theatrical per- formances. Those who can and will, pay what they think proper for the entertainment. And to the credit of the Persian, be it added that very few fail to give something when the play is over.