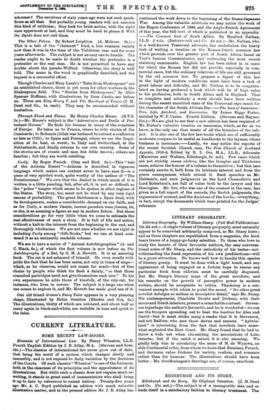 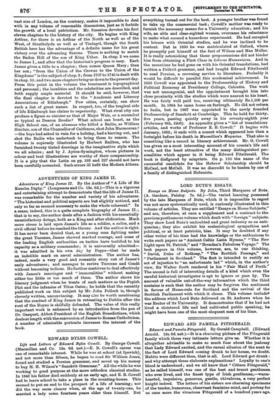 Page 11, 3 December 1904 — vast size of London, on the contrary, makes it impossible
Close

vast size of London, on the contrary, makes it impossible

to deal with in any volume of reasonable dimensions, just as it forbids the growth of a local patriotism. Mr. Smeaton devotes his first eleven chapters to the history of the city. He begins with King Arthur, for there is an Arthur of the North as well as of the West, of Strathclyde as well as of Tintagel, though the South British hero has the advantage of a definite name for his great victory over the advancing Saxons. There is nothing to match the Badon Hill of the son of King lJther. In chap. 2 we come to James I., and after that the historian's progress is easy. Each James gives a title to a chapter ; then comes Queen Mary ; then her son ; "from the Union of the Crowns to the Union of the Kingdoms" is the subject of chap. 9; from 1707 to 1745 is dealt with in chap. 10; and two more chapters bring us down to the present day. From this point in the volume the treatment is topographical and personal ; the localities and the celebrities are described, and both supply ample material. It should be said, however, that the final chapter is devoted to the "Academic and Literary Associations of Edinburgh." Few cities, certainly, can show such a list of great names. In respect, too, of the tragical side of life Edinburgh has claims to superiority. What rival city can produce a figure so sinister as that of Major Weir, or a scoundrel so typical as Deacon Brodie ? What school can boast, as the High School can, of an alumnus who killed a Bailie, as William Sinclair, son of the Chancellor of Caithness, shot John Macmorran —the boys had asked in vain for a holiday, had a barring out, and shot the Bailie who undertook to bring them to reason. The volume is copiously illustrated by Herbert Railton, who has furnished twenty tinted drawings in the imaginative style which we all admire ; and by J. Ayton-Symington, whose pictures in colour and text illustrations are worthy of their companionship. It is a pity that the Latin on pp. 193 and 227 should not have been carefully corrected. Such errors ill befit the Modern Athens.