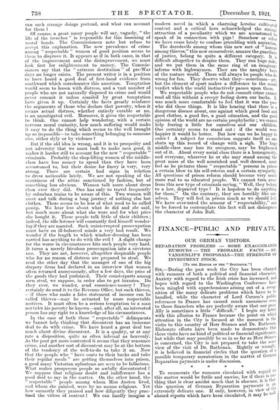 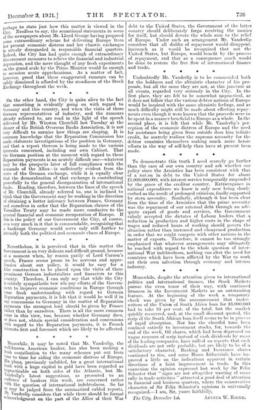 (To THE EDITOR OF THE " SPECTATOR."3 Sra,—During the past week the City has been charged with rumours of both a political and financial character. Anxiety with regard to the Irish crisis has increased, and hopes with regard to the Washington Conference have been mingled with apprehensions arising out of a recog- nition of the many delicate problems which have to be handled, while the character of Lord Curzon's public references to France has caused much uneasiness even to those financiers who are perfectly aware that our great Ally is sometimes a little " difficult." I begin my letter with this allusion to France because the point on which attention in the City is focused at the moment is the visits to this country of Herr Stinnes and Dr. Rathenau. Elaborate efforts have been made to demonstrate that these visits have no kind of political or financial significance, but while that may possibly be so in so far as Herr Stinnes is concerned, the City is not prepared to take the sang view of the visit of Dr. Rathenau. Rightly or wrongly, it is believed in financial circles that the question of 3 possible temporary moratorium in the matter of German Reparation payments is under discussion.

To enumerate the rumours circulated with regard to this matter would be futile and unwise, for if there is one thing that is clear amidst much that is obscure, it is that this question of German Reparation payments 13 all extremely delicate one. If only, however, in view of the absurd reports which have been circulated, it may be w° perhaps to state just how this matter is viewed in the City. Needless to say, the sensational statements in some of the newspapers about Mr. Lloyd George having prepared some extraordinary scheme for delivering Europe from her present economic distress and her chaotic exchanges is utterly disregarded in responsible financial quarters. Indeed, the City has had quite enough of extraordinary Government measures to relieve the financial and industrial depression, and the mere thought of any fresh experiments on the grand scale by the Prime Minister would be enough to occasion acute apprehensions. As a matter of fact, however, proof that these exaggerated rumours can be safely dismissed is afforded by the steadiness of the Stock Exchange throughout the week.

* * * * On the other hand, the City is quite alive to the fact that something is evidently going on with regard to Germany and this country, and when the visits of these German representatives of industry, and the rumours already referred to, are read in the light of the speech delivered by Mr. Winston Churchill last Tuesday at the dinner of the British Overseas Banks Association, it is not very difficult to surmise how things are shaping. It is common knowledge that the Reparation Commission has made elaborate investigations of the position in Germany, and that a report thereon is being made to the various interests concerned, including our own Cabinet. That the German position at the moment with regard to these Reparation payments is an acutely difficult one—whatever may be the prospects later of full compliance with the demands of the Allies—is sufficiently evident from the state of the German exchange, while it is equally clear that the demoralization of that exchange is contributing powerfully to the general disorganization of international trade. Reading, therefore, between the lines of the speech of Mr. Churchill, already referred to, one is inclined to think that the Government may be working in the direction of obtaining a better intimacy between France, Germany and ourselves in order that the Reparation clauses of the Versailles Treaty may be made more conducive to the general financial and economic recuperation of Europe. If this is the policy of our Government the City, of course, sees very much in it that is commendable, recognizing that a bankrupt Germany would serve only still • further to intensify both the political and economic chaos of Europe.

Nevertheless, it is perceived that in this matter the Government is on very delicate and difficult ground, because at a moment when, by reason partly of Lord Curzon's speech, France seems prone to be nervous and appre- hensive about our policy, it would be easy for a false construction to be placed upon the visits of these Prominent German industrialists and financiers to this country. Therefore, I can only say that while the City is entirely sympathetic tow rds any efforts of the Govern- ment to improve economic conditions in Europe through Some fresh understanding with regard to German Reparation payments, it is felt that it would be well if in any concessions to Germany in the matter of Reparation payments the strongest lead should be given by France rather than by ourselves. There is all the more common sense in this view, too, because whether Germany does, or does not, obtain special consideration and concessions with regard to the Reparation payments, it is French interests first and foremost which are likely to be affected.

* * * * Meanwhile, it may be noted that Mr. Vanderlip, the well-known American banker, has also been making a fresh contribution to the many schemes put out from time to time for aiding the economic distress of Europe. yis plans, previously unfolded, for a great international bank with a huge capital in gold have been regarded as Impracticable on both sides of the Atlantic, but Mr. Vanderlip's latest suggestions, as presented to an audience of bankers this week, are concerned rather With the question of international indebtedness. So far as may be judged from the summarized cabled reports, Vanderlip considers that while there should be formal "Lnowledgment on the part of the Allies of their War debt to the United States, the Government of the latter country should deliberately forgo receiving the monies for itself, but should devote the whole sum to the relief of Europe. Under such an arrangement Mr. Vanderlip considers that all dislike of repayment would disappear, inasmuch as it would be recognized that not the United States, but Europe, would benefit by the process of repayment, and that as a consequence much would be done to restore the free flow of international finance and trade.

Undoubtedly Mr. Vanderlip is to be commended both for the boldness and the altruistic character of his pro- posals, but all the same they are not, at this juncture at all events, regarded very seriously in the City. In the first place, they are felt to be somewhat unpractical, as it does not follow that the various debtor nations of Europe would be inspired with the same altruistic feelings, and as much difficulty might still be made about effecting repay- ments even though it were known that the proceeds were to be spent in a manner beneficial to Europe as a whole. In the second place, it is felt that while Mr. Vanderlip's per- ception of the economic distress of Europe and the need for assistance being given from outside does him infinite credit, he scarcely realizes the supreme necessity for the debtor countries themselves making much more heroic efforts in the way of sell-help than have at present been made.

* * * * To demonstrate this truth I need scarcely go further than the case of our own country and ask whether our policy since the Armistice has been consistent with that of a nation in debt to the United States for about £1,000,000,000, with interest service temporarily suspended by the grace of the creditor country. Extravagance in national expenditure we know is only now being slowly curbed as the result of prolonged criticism, finally supported by stern necessity. Similarly, although it has been clear from the time of the Armistice that the prime necessity was the repayment of our external debt through an ade- quate export of goods and services, the Government calmly accepted the dictates of Labour leaders that a reduction in production and higher costs in the shape of wages and reduced hours of working should govern the situation rather than increased and cheapened production in order that we might compete with other nations in the matter of exports. Therefore, it cannot be too strongly emphasized that whatever arrangements may ultimately be reached with regard to the whole question of inter- national War indebtedness, nothing can alter the need for countries which have been afflicted by the War to work out their own salvation through economy and intense industry. * * * * Meanwhile, despite the attention given to international politics and international finance, the Stock Markets pursue the even tenor of their way, with continued firmness in the Investment Markets as an outstanding feature. At the beginning of the week a temporary check was given by the announcement that under- writers of the Union of South Africa loan for £6,000,003 had to take 83 per cent. of the total, but the market quickly recovered, and, at the small discount quoted, the scrip of the South African loan itself seems to be in process of rapid absorption. Nor has the cheerful tone been confined entirely to investment stocks, for, towards the end of the week, Oil shares, which had been depressed on vague rumours of scrip instead of cash dividends by some of the leading companies, have rallied on reports that cash dividends arc not only probable, but are likely to be of a satisfactory character. Banking and Insurance shares continued to rise, and some Home Industrials have im- proved a little on the indications apparent in certain directions of a faint improvement in trade. In this connexion the opinion expressed last week by Sir Felix Schuster that " signs arc not altogether wanting of sonic rally in trade activities " attracted a good deal of attention in financial and business quarters, where the conservative character. of Sir Felix Schuster's opinions is universally recognized.—I am, Sir, yours faithfully,