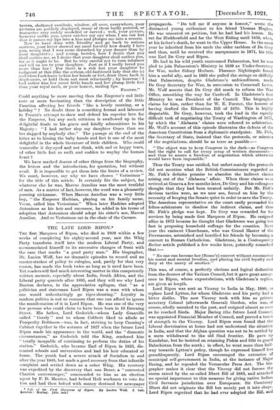 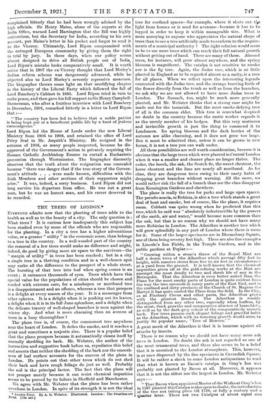 THE first Marquess of Ripon, who died in 1909 within a few weeks of completing his eighty-second year, saw the Whig Party transform itself into the modem Liberal Party, and accommodated himself to its successive changes of front with the ease that marks " a good party man." His biographer, Mr. Lucien Wolf, has no dramatic episodes to record and no master-strokes of policy to eulogize, and, partly for that very reason, has made the book twice as long as it need have been. Yet readers will find much interesting matter in this competently written memoir, especially about India, South Africa, and the Liberal party quarrels after 1895, and they will see why Lord Buxton declares, in the appreciative epilogue, that " as a politician and statesman Lord Ripon was a man with whom one would unhesitatingly go tiger-shooting." Loyalty in modem politics is not so common that one can afford to ignore the manifestation of it in Lord Ripon. He was one of the very few persons who could claim to have been born in 10 Downing Street. His father, Lord Goderich—whom Lady Granville called " Goody " and to whom Cobbett liked to allude as Prosperity Robinson—was, in fact, striving to keep Canning's Cabinet together in the autumn of 1827 when the future Lord Ripon made his appearance in the world, and the " domestic circumstances," as Goderich told the King, rendered him " totally incapable of continuing to perform the duties of his station." Goderich, who became Earl of Ripon in 1833, dis- trusted schools and universities and had his heir educated at home. The youth had a severe attack of Socialism in and after the year 1848, but made a good recovery from that infantile complaint and settled down as a sober Whig. His recovery was expedited by the discovery that one Bezer, a " converted Chartist costermonger," commended to him as an election agent by F. D. Maurice, had bribed Hull workmen to vote for him and had then bolted with money destined for newspaper • 146 of the First marquess of Ripon. By Lucien WolL 2 vole. London : Murray. [42e. neLl propaganda. " Do tell me if anyone is honest," wrote the distracted young enthusiast to his friend Thomas Hughes. He was unseated on petition, but he had had his lesson. Ho

sat for Huddersfield and for the West Riding until 1859, when, at his father's death, he went to the Upper House. In the same year he inherited from his uncle the older earldom of De Grey and thus, until he received the marquessate in 1871, his title was Earl De Grey and Ripon.

He had in his wild youth contemned Palmerston, but he was glad to join Palmerston's Ministry in 1859 as Under-Secretary for War, under Sidney Herbert. Florence Nightingale found him a useful ally, and in 1863 she pulled the strings so skilfully that Palmerston, despite Gladstone's unfriendliness, made De Grey Secretary for War, in succession to Cornewall Lewis. Mr. Wolf asserts that De Grey did much to reform the War Office, smoothing the way for Cardwell. In Gladstone's first Ministry he was President of the Council. The biographer claims for him, rather than for W. E. Forster, the honour of having drafted the Education Bill of 1870. This is highly disputable. De Grey, however, took the lead in the equally difficult task of negotiating the Treaty of Washington of 1871, by which the ' Alabama' claims were referred to arbitration. Mr. Wolf's account of this episode illustrates the defects of the American Constitution from a diplomatic standpoint. Mr. Fish, the Secretary of State, insisted that the protocols, or minutes of the negotiations, should be as terse as possible :- " The object was to keep Congress in the dark—as Congress had the right to call for every scrap of written documents— and thus to assure a freedom of negotiation which otherwise would have been impossible."

Thus the Treaty was ratified, but unfortunately the protocols did not mention what the British Commissioners regarded as Mr. Fish's definite promise to abandon the indirect claims arising out of the ' Alabama' affair. When these claims were revived at Geneva a few months later, De Grey and his colleagues thought that they had been treated unfairly. But Mr. Fish's devious tactics were, as we now see, forced on him by the necessity of keeping the Senate quiet in order to save the Treaty.

The American representative on the court easily persuaded his fellow-arbitrators to disallow the indirect claims, and thus Mr. Fish's pledge was kept. De Grey was rewarded for his services by being made first Marquess of Ripon. He resigned office in 1873 because he thought that Gladstone was going too fast in proposing household suffrage for the counties. Next year the eminent Churchman, who was Grand Master of the Freemasons, astonished and horrified his friends by becoming a

that :— " No one can become her [Rome's] convert without renouncing his moral and mental freedom, and placing his civil loyalty and duty at the mercy of another."

This was, of course, a perfectly obvious and logical deduction from the decrees of the Vatican Council, but it gave great annoy- ance to Ripon, whose expostulations, with Gladstone's replies, are given at length.

Lord Ripon was sent as Viceroy to India in May, 1880, co replace Lord Lytton, for whom Gladstone and his party had a bitter dislike. The new Viceroy took with him as private secretary Colonel (afterwards General) Gordon, who was, of course, wholly unsuited to the post, and resigned almost as soon as he reached Simla. Major Baring (the future Lord Cromer) was appointed Financial Member of Council, and proved a towel of strength to the Viceroy. Lord Ripon soon found that the Liberal doctrinaires at home had not understood the situation in India, and that the Afghan question was not to be settled by a mere withdrawal to the old Sind frontier. He gave ue Kandahar, but he insisted on retaining Pishin and Sibi to guard Baluchistan from the north ; in effect, he went more than half- way towards Lytton's policy, though he expressed himself less grandiloquently. Lord Ripon encouraged the extension of municipal self-government in India, at the instance of Major Baring, and he repealed the Vernacular Press Act. The bio- grapher makes it clear that the Viceroy did not foresee the storm raised by the so-called Ebert Bill of 1883, and attached no special importance to this measure for giving native Indian Civil Servants jurisdiction over Europeans. Sir Courteruty Ebert did not originate the Bill but merely put it into shape. Lord Ripon regretted that he had ever adopted the Bill, and

complained bitterly that he had been wrongly advised by the high officials. Sir Henry Maine, alone of the experts at the India Office, warned Lord Hartington that the Bill was highly contentious, but the Secretary for India, according to his own account, put Maine's letter in his pocket and forgot to send it to the Viceroy. Ultimately, Lord Ripon compromised with the outraged European community by giving them the right to trial by jury. In these days, when our policy seems almost designed to drive all British people out of India, Lord Ripon's mistake looks comparatively small. It is worth notice that in 1907 the ex-Viceroy thought that Lord Morley's Indian reform scheme was dangerously advanced, while he objected also to Lord Morley's severely repressive measures. The biographer throws some light on that unedifying chapter in the history of the Liberal Party which followed the fall of Lord Rosebery's Cabinet in 1895. Lord Ripon tried in vain to make peace, and then gave his full support to Sir Henry Campbell- Bannerman, who after a fruitless interview with Lord Rosebery in December, 1901, remarked bitterly in a letter to Lord Ripon that :— " The country has been led to believe that a noble patriot is being kept out of a beneficent public life by a knot of jealous curmudgeons."

Lord Ripon led the House of Lords under the new Liberal Ministry from 1906 to 1908, and retained the office of Lord Privy Seal in Mr. Asquith's Ministry. He resigned in the autumn of 1908, as many people 'suspected, because he dis- approved of the Government's action in privately requiring the Roman Catholic Archbishop Bourne to curtail a Eucharistic procession through Westminster. The biographer discreetly observes that the truth about the resignation was concealed because " there was danger that if the true story of the Govern- ment's attitude . . . were made known, difficulties with the Irish Members and other sections of their supporters might arise." It was, indeed, a sorry business. Lord Ripon did not long survive his departure from office. He was not a great man, but he was an honest man, and his career deserved to be recorded.