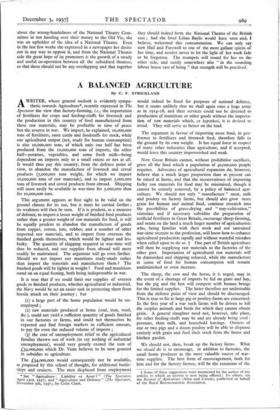 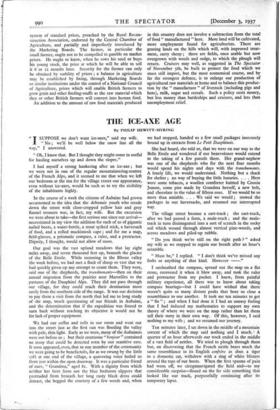 AWRITER, whose general outlook is evidently sympa- thetic towards Agriculture*, recently expressed in The Spectator the view that factory-farming, i.e., the importation of fertilisers for crops and feeding-stuffs for livestock and the production in this country of food manufactured from these raw materials, may be profitable in time of peace but the reverse in war. We import, he explained, io,000,000 tons of fertilisers, store cattle and foodstuffs for stock, while our agricultural output (net, ready for human consumption) is also io,000,000 tons, of Which only one half has been produced from the io,coo,000 tons of imports, the other half—potatoes, vegetables, and some fresh milk—being dependent on imports only to a small extent or not at all. It would thus pay this country, from the defence point of view, to abandon the manufacture of livestock and cereal products (5,000,000 tons weight, for which we import io,o0o,000 tons of raw materials), and to import 5,000,000 tons of livestock and cereal products from abroad. Shipping will more easily be available in war-time for 5,000,000 than for io,000,000 tons.

This argument appears at first sight to be valid on the ground chosen for its use, but it must be carried farther ; its weakness will then be seen. If it is prudent, as a measure of defence, to import a lesser weight of finished food products rather than a greater weight of raw materials for food, it will be equally prudent to abandon the manufacture of goods from copper, cotton, jute, rubber, and a number of other imported raw materials, and to import from overseas the finished goods themselves, which would be lighter, and less bulky. The quantity of shipping required in war-time will thus be reduced, and our supplies from abroad will more readily be maintained. The argument will go even farther. Should we not import our munitions ready-made rather than import the materials and manufacture them ? The finished goods will be lighter.in weight ! Food and munitions stand on an equal footing, both being indispensable in war.

It is true that if we could limit our supplies of oversea goods to finished products, whether agricultural or industrial, the Navy would be set an easier task in protecting them from hostile attack on their journey ; but (I) a large part bf the home population would be un- employed ; (2) raw materials produced at home (coal, iron, wool, &c.), could not yield a sufficient quantity of goods finished in our factories or farms, and could not themselves be exported and find foreign markets in sufficient amount, to pay for even the reduced volume of imports ; (3) the cost of unemployment relief to the agricultural families thrown out of work (to say nothing of industrial unemployment), would very greatly exceed the sum of £34,000,000 which Dr. Venn believes to be now granted in subsidies to agriculture.

The £34,000,000 would consequently not be available, as proposed by this school of thought, for additional battle- ships and cruisers. The men displaced from employment

would indeed be freed for purposes of national defence, but it seems unlikely that we shall again raise a huge army as in 1914-18, and their services could not be diverted to production of munitions or other goods without the importa- tion of raw materials which, ex hypothesi, it is desired to avoid. They will serve us better on the land.

The argument in favour of importing more food, in pre- ference to fertilisers and livestock feed, therefore falls to the ground by its own weight. It has equal force in respect of many other industries than agriculture, and if accepted, would leave this country impoverished and weak.

Now Great Britain cannot, without prohibitive sacrifices, grow all the food which a population of 4o,000,000 people requires. Advocates of agricultural expansion do, however, believe that a much larger proportion than at present can be raised at home, and that the inconvenience of importing bulky raw materials for food may be minimised, though it cannot be entirely removed, by a policy of balanced agri- culture. We should not only " manufacture " meat, milk and poultry on factory farms, but should also grow more grain for human and animal food, continue research into the possibilities of grass-drying and " tray-Cultivation," stimulate and if necessary subsidise the preparation of artificial fertilisers in Great Britain, encourage sheep-farming, and retain on the land a much larger number of agriculturists who, being familiar with their work and not untrained war-time recruits to the profession, will know how to enhance agricultural production rapidly and without wasteful mistakes when called upon to do so. t One part of British agriculture will then be supplying raw materials to the factories of the other part. Importation of agricultural raw materials will be diminished and shipping released, while the manufacture at home of food for human consumption will remain undiminished or even increase.

The sheep, the cow and the horse, it is urged, may in the event of a shortage of imports be fed on grass and hay, but the pig and the hen will compete with human beings for the limited supplies. The latter therefore are undesirable from the defence point of view and should be discouraged. This is true so far as large pig or poultry-farms are concerned. In the first year of a war such farms will be driven to kill the surplus animals and birds for which they cannot obtain grain. A general slaughter need not, however, take place, for other feeding-stuffs may be and are already being used : potatoes, skim milk, and household leavings. Owners of one or two pigs and a dozen poultry will be able to dispense entirely with grain and feed their stock from the house and kitchen garden.

We should not, then, break up the factory farms. What we should do is to encourage, in addition to factories, the small home producer as the most valuable source of war- time supplies. The best form of encouragement, both for him and for the factory farmer, will be the extension of the

f Some of these suggestions were mentioned by the author of the articles to which an answer is now being offered ; for others, see the Revival of Agriculture (Allen and Umvin), published on behalf of the Rural Reconstruction Association.

system of standard prices, preached by the Rural Recon- struction Association, endorsed by the Central Chamber of Agriculture, and partially and imperfectly introduced by the Marketing Boards. The farmer, in particular the small farmer, ought not to be compelled to gamble on market prices. He ought to know, when he sows his seed or buys his young stock, the price at which he will be able to sell it 6 or 12 months later. Security for the farmer can only be obtained by stability of prices ; a balance in agriculture may be established by fixing, through Marketing Boards or similar institutions under the control of a National Council of Agriculture, prices which will enable British farmers to grow grain and other feeding-stuffs as the raw material which they or other British farmers will convert into human food.

An addition to the amount of raw food materials produced in this country does not involve a subtraction from the total of food " manufactured " here. More land will be cultivated, more employment found for agriculturists. There are grazing lands on the hills which will, with improved treat- ment, carry sheep ; there are fields, once arable but now overgrown with weeds and sedge, to which the plough will return. Cruisers may well, as suggested in The Spectator of November 5th, be built to protect the food which we must still import, but the most economical course, and by far the strongest defence, is to enlarge our production of agricultural raw materials at home and to balance this produc- tion by the " manufacture " of livestock (including pigs and hens), milk, sugar and cereals. Such a policy costs money, but less money than battleships and cruisers, and less than unemployment relief.