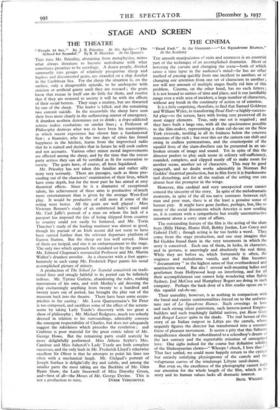 "Dead End." At the Gaumont—" Lo Squadrone Bianco." At the Academy THE smooth manipulation of exits and entrances is an essential part of the technique of an accomplished dramatist. Short of

lowering the curtain and changing the scene—both of which cause a time lapse in the audience's mind—he has no other method of passing quickly from one incident to another, or of changing our attention from one set of characters to another ; nor will any amount of multiple stages finally rid him of this problem. Cinema, on the other hand, has no such fetters ; it is not bound to unities of time and place, and it can justifiably range over a wide area of incident, a large number of characters, without any break in the continuity of action or of emotion.

It is a little surprising, therefore, to find that Samuel Goldwyn and William Wyler, in transferring Dead End—a highly-suCcess-

ful play—to the screen, have with loving care preserved all its most stagey elements. True, only one set is required ; and

they- have built a large one, with all the spaciousness possible to the film-maker, representing a slum cul-de-sac on the New York riverside, nestling in all its foulness below the concrete mansions of the rich ; but over this set the camera can shift and swing in endless permutations, and the counterpoint of the squalid lives of the slum-dwellers can be presented in an un- broken stream of image and sound. Yet in spite of this the director prefers to play each scene in solitary self-sufficiency, rounded, complete, and clipped neatly off to make room for another scene, another set of characters. This may be good stagecraft, and no doubt works admirably in Norman Bel Geddes' theatrical production, but in film forM it is tiurciensome and disturbing, and for all the realism of the setting. one can almost hear the prompter in the wings.

However, this cardinal and very unexpected error cannot conceal the sincerity of the story. In spite of the melodramatic: moments, in spite of the all too naive contrasts between rich man and poor man, there is at the least a genuine sense of human pity. It might have gone, further, perhaps, but, like -so many of the social documents which America is now sending us, it is content with a sympathetic but totally unconstructive statement about a sorry state of affairs.

The outstanding feature of the film is the acting of the slum boys (Billy Halop, Huntz Hall, Bobby Jordan, Leo Corey. and Gabriel Dell) ; though acting is far too feeble a word. They, come from the stage production, and one may imagine that Bel Geddes found them in the very tenements in which the story is conceived. Each one of them, in looks, in character, and in gesture, is unerringly and absolutely the, real thing. While they are before us, which fortunately is often, the staginess and melodrama vanish, and the film becomes " documentary " in the highest sense of that overburdened and unattractive- word. But alas ! several well-meaning ladies and gentlemen from Hollywood keep on interfering, and for all their accomplishment one cannot help wondering what Sylvia Sydney, Joel McCrea and Humphrey Bogart are doing in such company. Perhaps the back door of a film studio opens on to this squalid cul-de-sac.

Their unreality, however, is as nothing in comparison with the banal and canine sentimentalities forced on to the unfortu- nate cast of Lo Squadrone Bianco. Such crossings in love and such strong silent patriotism, such lantern-jawed Empire- builders and such touchingly faithful natives, put Beau Geste and Bengal Lancer quite in the shade. The real heroes of this story of an Italian outpost in Libya are the camels, whose ungainly figures the director has transformed into a constant frieze of pleasant movement. It seems a pity that this Saharan magnificence should be subordinated to a schoolboy's dream of the last century and the regrettable miasmas of unrequited love.- One sighs indeed for the coarse but definitive solidity of the Shakespearian clown—" Whoops ! chuck, love thee ! That fact settled, we could more happily return to the cynical but entirely satisfying physiognomy of the camels and the voluptuous curves of the windswept Libyan sand-dunes. But even so, the excellence of the photography cannot hold our attention for the whole length of the film, which in its story and its human values lacks all dramatic interest. -