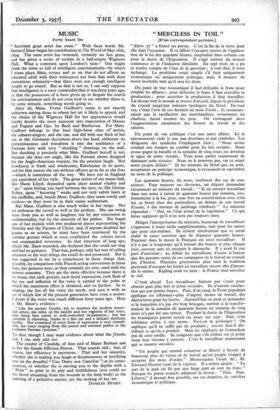 " ANOTHER great artist has come." With these words Mr. Bernard Shaw began his contribution to The World of May 16th,

1894. The same artist has returned, certainly no less great, and has given a series of recitals in a half-empty Wigmore Hall. What a comment upon London's taste ! One might think the town so full of intelligent entertainments—by which I mean plays, films, revues and so on that do not affront an educated adult with their witlessness nor bore him with their pretentious solemnity—that there were not enough intelligent people to go round. But as that is not so, I can only suppose that intelligence is a rarer commodity that it was forty years ago, or that the possessors of it have given up in despair the search for entertainment and do not even look to see whether there is, by some miracle, something worth going to.

After all, Mme. Yvette Guilbert's name is not exactly unknown among those to whom her art is likely to appeal, and the choice of the Wigmore Hall for her appearances would hardly deceive the most innocent into expectation of Masses and Fugues and Ops. by Bach and Beethoven. For Mme.

Guilbert belongs to that least high-brow class or artists, the cabaret-singers, and she can, and did with one flash of her

eye at the Germanic decoration above her head, obliterate its pretentiousness and transform it into the semblance of a

Parisian bate with very " shocking " drawings on the wall. But shocking is precisely what Mme. Guilbert herself is not,

because she does not angle, like the Parisian shows designed for the Anglo-American tourists, for the prurient laugh. Her

bawdiness is frank and wholesome, Rabelaisian in its gusto, and for that reason she can without offence go as far as she does

—which is sometimes all the way. We have not in England

any equivalent of her style. The great artists of our music-hall, like Marie Lloyd, depended upon sheer animal vitality and

" go," upon hitting you hard between the eyes; or, like George Robey, upon " knowing " winks and not very subtle hints at the ineffable, and, beside Mme. Guilbert, they seem rowdy and restless—as they must be in their vaster auditorium.

But Mine. Guilbert is also much wider in her range. Her art embraces the sacred as well as the profane. She can wring tears from you as well as laughter, not by any concession to sentimentality, but by the sincerity of her pathos. She began one of her recitals with two mediaeval pieces representing the Nativity and the Passion of Christ, and, if anyone doubted her genius as an actress, he must have been convinced by the sublime gesture which at once established the solemn mood and commanded reverence. In that interview of long ago, which Mr. Shaw recorded, she declared that she could not sing and had no gestures. That was, perhaps, only her way of calling attention to the very things she could do and possessed. But it was suggested to me by a connoisseur in these things that, possibly, by comparison with French acting conventions in those

days, her gestures were, as they certainly are now, used with the utmost economy. They are the more effective because there is no waste, but each gesture, each facial expression, each flash of the eye and inflexion of the voice is carried to the point at which the maximum effect is obtained, and no further. As to singing, she has all the voice she needs, and uses it with an art of which few of the present generation have even a notion.

I doubt if the voice was much different forty years ago. Here is Mr. Shaw's evidence :

" Like the ancient Greeks, not to mention the modern music- hall artists, she relies on the middle and low registers of her voice, they being best suited to well-controlled declamation ; but her cantabile is charming, thanks to a fine ear and a delicate rhythmic faculty. Her command of every form of expression is very remark- able, her tones ranging from the purest and sweetest pathos to the cockniest Parisian cynicism."

To that, though I may want evidence about what the Greeks

did, I can only add stet.

The creator of Candida, of Ann and of Major Barbara saw

in her the female Efficient Person. That sounds odd ; but, of course, her efficiency is enormous. That and her sincerity,

whether she is making you laugh at licentiousness or terrifying you (in the dreadful "Une Dame aux Camelias ") at its conse- quences, or whether she is moving you to the depths with a

painting of a primitive master, are the making of her art.