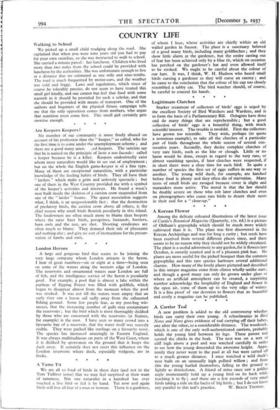 Starker treatment of collectors of birds' eggs is urged by the excellent Society of Bird Watchers and Wardens, and is to form the basis of a Parliamentary Bill. Oologists have done and do many things that are reprehensible ; but a good collection of birds' eggs is a beautiful thing, with much sckntifieinterest. The trouble is twofold. First the collectors have grown too scientific. They wish, perhaps (to quote a notorious example), to take all the clutches of a particular pair of birds throughout the whole season of several con-• secutive years. Secondly, they desire complete clutches of very rare birds, such as the kite or though. Little or no harm would be done, except in regard to the very rare, or almost vanishing species, if later clutches were respected, if in short there were a close time for each bird. In quite a number of species the first set of eggs suffers in one way or another. The young wild duck, for example, are hatched before food is plenty and they often die of starvation. Many nests of small birds are ravaged because cover is slight and marauders more active. The moral is that the law should be doubly severe on those who rob later clutches and even on photographers who cause rare birds to desert their nests in their zeal for a " close-up."