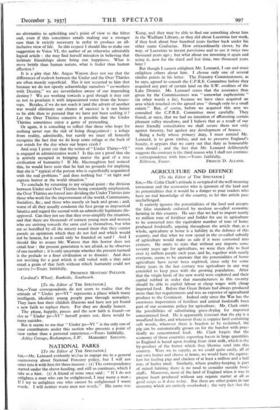 [To the Editor of THE SPECTATOR.] Sra,—Mr. Lennard evidently wi."--tes to engage me in a general controversy about National Forestry policy, but I will not enter into it with him for three reasons (x) The correspondence started under the above heading, and still so continues, which I take as a hint. (2) A friend of mine once said : " If I do not enlighten a man who can be enlightened, I may waste a man ; If I try to enlighten one who cannot be enlightened I waste words. I will neither waste men nor words." His name was 'Kung„ and they may be able to find out something about him in the Wadham Library, as they did about Lucretius last week, if they look about four hundred years further back under his other name Confucius. How extraordinarily clever, by the way, of Lucretius to invent parvissima and to use it twice two thousand years ago ; but what about me inventing it again and using it, now for the third and last time, two thousand years later ?

gut though I cannot enlighten Mr. Lennard, I can and must enlighten others about him. I choose only one of several similar points in his letter. The Forestry Commissioners, as he says, agreed to consult the C.P.R.E. Committee before they acquired any part of certain land on the S.W. confines of the Lake District. Mr. Lennard states that the assurance thus given by the Commissioners was " somewhat euphemistic " (in other words a lie), because we have since acquired an area which touched on the agreed area " though only to a small extent." But, of course, before we acquired this area we consulted the C.P.R.E. Committee most carefully. They found, at once, that we had no intention of afforesting certain pleasant valley meadows, and I believe that as a result of our most friendly consultation we shall secure them not only against forestry, but against any development of houses.

Being a body whose primary duty, I must remind Mr. Lennard, is to grow timber, and not to preserve England's beauty, it appears that we carry out that duty as honourable men should ; and the fact that Mr. Lennard deliberately suggests the contrary is the third reason why I shall not continue a correspondence with him.—Yours faithfully,