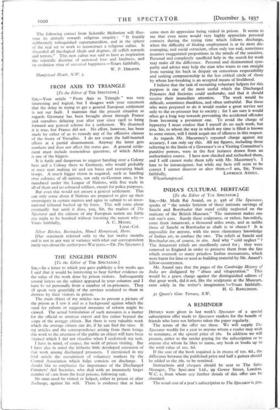 [To the Editor of THE SPECTATOR.] Mulk Raj Anand, on p. 956 of The Spectator, speaks of " the tender lyricism of those intimate carvings of Sanchi and Borobudur that stand coldly neglected on the staircase of the British Museum:" The statement makes one rub one's eyes. Surely these sculptures, or rather, bas-reliefs, come from Amaravati, a thousand miles away, and as unlike those of Sanchi or Borobudur as chalk is to cheese ? It is impossible for anyone, with the most elementary knowledge of Indian art, to confuse the two. The reliefs at Sanchi and Borobudur are, of course, in situ. And why " cold neglect " ? The Amaravati reliefs are excellently cared for ; they were removed to England in order to preserve them from the fate which overtook so many priceless Indian monuments, which were burnt for lime or used as building material-by Mr. Anand's fellow-countrymen.

Mr. Anand says that the pages of the Cambridge History of India are disfigured by " abuse and vituperation." This would be a grave charge against the distinguished editors cf that great work, did it not, like the sculptures at the Museum, exist solely in the writer's imagination !—Yours faithfully,- H. G. RAWLINSON. 32 Queen's Gate Terrace, S.W.