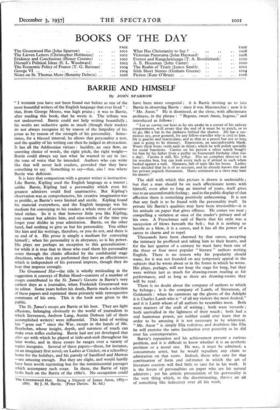 By JOHN SPARROW " I WONDER you have not been found out before as one of the most beautiful writers of the English language that ever lived " : that, from George Moore, was high praise ; it was to Barrie, after reading this book, that he wrote it. The tribute was not undeserved. Barrie could not help writing beautifully ; his works are seductive quite as much (though their readers do not always recognise it) by reason of the limpidity of his prose as by reason of the strength of his personality. Some- times, for a blessed interval, he allows that personality a rest, and the quality of his writing can then be judged in abstraction. It has all the Addisonian virtues : lucidity, an easy flow, an unerring choice of words, the right pitch, the right weight— Barrie could always say just what he wanted to say in jus: the tone of voice that he intended. Authors who can write like that will never lack readers, provided that they have something to say. Something to say—that, alas ! was where Barrie was deficient.

It is here that comparison with a greater writer is instructive. Like Barrie, Kipling used the English language as a master ; unlike Barrie, Kipling had a personality which even his greatest admirers could find unattractive. But Kipling's observation was as comprehensive, his creative imagination was as prolific, as Barrie's were limited and sterile. Kipling found his material everywhere, and the English language was his medium for, conveying to his readers a whole store of accumu- lated riches. So it is that however little you like Kipling, you cannot but admire him, and nine-tenths of the time you forget your dislike in your admiration. Barrie, on the other hand, had nothing to give us but his personality. You either like him and his writings, therefore, or you do not, and there is an end of it. His prose is simply a medium for conveying himself ; when his personality is in abeyance, so is his power. His plays are perhaps an exception to this generalisation : for while it is true that to those who read them his personality oozes through the chinks afforded by the confidential stage directions, when they are performed they have an effectiveness which is independent of his personal impress, though they do bear that impress strongly.

The Greenwood Hat—the title is wholly misleading in the suggestion it conveys of Robin Hood—consists of a number of essays contributed to the St. James's Gazette in Barrie's very earliest days as a journalist, when Frederick Greenwood was its editor. Some years before his death, Barrie made a selection of these papers and reprinted them privately with retrospective comments of his own. This is the book now given to the public.

The St. James's essays are Barrie at his best. They are light effusions, belonging obviously to the • world of journalism in which Stevenson, Andrew Lang, Austin Dobson (all of them accomplished writers) were influential. This kind of writing has " gone out " since the War, except in the hands of Mr. Beerbohm, whose insight, depth, and sureness of touch can make even trifles enduring. Barrie had not yet developed that alter ego with which he played at hide-and-seek throughout his later works, and in these essays he ranges over a variety of topics incognito. Several of these papers—those, for instance, on an imaginary first novel, on Ladies at Cricket, on a schoolboy home for the holidays, and his parody of Sandford and Merton —are amusing enough. But they are slight, and would hardly have been worth reprinting but for the reminiscential passages which accompany each essay. In these, the Barrie of 1930 looks back on the Barrie of the ago's. No occupation could

have been more congenial ; it is Barrie inviting us to join Barrie in observing Barrie : once it was Maconochie ; now it is " Mr. Anon." He is dismissed, at the close, with affectionate archness, in the phrase : " Begone, sweet Anon, begone," and introduced as follows :

" Let us survey our hero as he sits awake in a corner of his railway compartment, well aware that the end of it must be to perch, or to let go, like a bat in the darkness behind the shutter. He has a sus- picious eye, poor gomeril, for any fellow-traveller who is civil to him. He is gauche and inarticulate, and as thin as a pencil but not so long (and is going to be thinner). Expression, an uncomfortable blank. Wears thick boots (with nails in them), which he will polish specially for social functions. Carries on his person a silver watch bought for him by his father from a pedlar on fourteenth birthday (that was a day). Carries it still, No. 57845. Has no complete dress-su't in his wooden box, but can look every inch as if attired in such when backed against a wall. Manners, full of nails like his boots. Ladies have decided that he is of no account, and he already knows this and has private anguish thereanent. Hates sentiment as a slave may hate his master."

The skill with which this picture is drawn is undeniable ; but that a man should be on such affectionate terms with himself, even after so long an interval of years, itself gives rise to an uncomfortable feeling ; and in the public display of that affection there is something positively unbecoming. It is not that any fault is to be found with the personality itself. In private life Barrie's qualities may have been irresistible—it is

his attitude on paper that gives offence. He comes too near ; compelling a violation at once of the reader's privacy and of his own. A Frenchman said of Barrie that his style was a succession of blows beneath the belt ; but it is nothing so hostile as a blow, it is a caress, and it has all the power of a caress to charm and to repel.

Thousands have been charmed by that caress, accepting the intimacy he proffered and taking him to their hearts, and for the last quarter of a century he must have been one of the three or four most popular " literary " authors writing English. There is no reason why his popularity should wane, for it was not founded on any temporary appeal in the subjects that he wrote about or in the forms in which he wrote. His plays, perhaps, will not keep the stage for long, but they were written just as much for drawing-room reading as for performance, and as long as there are drawing-rooms they will be read.

There is no doubt about the company of authors to which he belongs ; it is the company of Lamb, of Stevenson, of Goldsmith : when he summons up the ghosts of the Adelphi it is Charles Lamb who is " of all my visitors the most desired," and it is Lamb whom of all authors he resembles most. Both were masters of the craft of writing ; both were versatile ; both unrivalled in the lightness of their touch ; both had a real humorous power, yet neither could ever learn that in order to be amusing it is not necessary to be whimsical. " Mr. Anon " is simply Elia redivivus, and doubtless like Elia he will exercise the same fascination over posterity as he did over his contemporaries.

Barrie's reputation and his achievement present a curious problem, and it is difficult to know whether it is an aesthetic problem or a moral one. He was, it must be admitted, a consummate artist, but he would repudiate any claim to admiration on that score. Indeed, those who care for that combination of form and substance in which the art of literature consists will find little to care for in his work. It is the lovers of personalities on paper who are his natural admirers ; yet his artistic presentation of his personality is the very thing which, to the discriminating, throws an air of something like indecency over all his work.