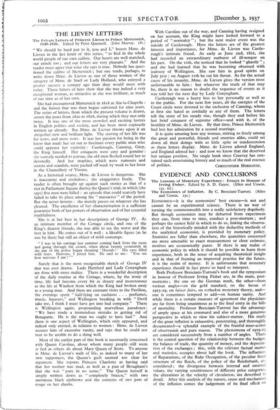 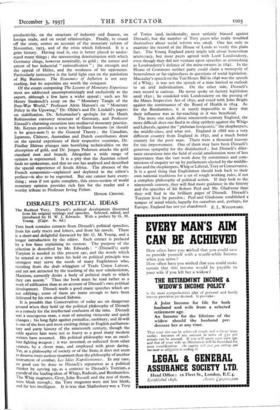 The Economics of Inflation. By C. Bresciani-Turroni. (Allen and Unwin. 25s.)

cannot be an experimental science. There is no way of turning the commonwealth into a really satisfactory dogsbody.

But though economists may be debarred from experiment they can, from time to time, conduct a post-mortem ; and perhaps the easiest field in which to do so, linking the observa-

tion of the historically minded with the deductive. methods of

the analytical economist, is provided by monetary policy. Statistics are fuller than elsewhere, the quantities concerned are more amenable to exact measurement or dose estimate, motives are economically purer. If there is any realm of economic policy in which it should be possible to learn from experience, both in the sense of acquiring theoietiCal insight and in that of framing an improved practice for the future, it is the realm of money. It is unfortunate that monetary experience should in fact prove'so hard so interpret.

Both Professor Bresciani-Turroni's book and the symposium in honour of Professor Irving Fisher are, in the main, post-

mortems ; the one on the German mark, the other—from various angles—on the gold standard, on the boom of 1925-29, on laisser faire, on orthodox monetary theory, and—

one is sometimes tempted to add—on human sanity. And while there is a certain measure of agreement the physicians are far from being unanimous as to the final entry in the bills of mortality. - Professor Bresciani-Turroni hai the advantage of ample space at his command and also of a more generous perspective in which to view his subject-matter. His study of the great inflation is exhaustive, penetrating, and thoroughly documented—a splendid example of the fruitful inter-action of observation and pure reason. The phenomena of 1919-23 are considered successively from a number of angles. There is the central question of thp relationship between the budget, the balance of trade, the quantity of money, and the deprecia- tion of the exchanges ; this, with the relevant factual matter and statistics, occupies about half the book. The influences of Reparations, of the Ruhr OcCupation, of the peculiar fiscal structure of the Reich, of the policy of the Reichsbank, arc considered ; the divergence between internal and external

values, the varying sensitiveness of different price categories, the alterations in the velocity of circulation, are described in detail. After this analysis of the nature, cause and mechanism of the inflation comes the judgement of its final effect on productivity, on the structure of industry and finance, on foreign trade, and on social relationships. Finally, to round off the story, comes an account of the monetary reform of November, 1923, and of the crisis which followed. It is a grim history. Having read it, one is better placed to under- stand many things ; the unreasoning determination with which Germany clings, however nominally, to gold ; the nature and extent of her industrial " rationalisation " ; the strength and the appeal of Hitler, and the weakness of his opponenti. Particularly instructive is the lurid light cast on the patriotism of Big Business. The Economics of Inflation is not easy reading, but its asperities are worth the conquest.

Of the essays composing The Lessons of Monetary Experience most are addressed uncompromisingly and exclusively to the expert, although a few have a wider appeal ; such are Sir Henry Strakosch's essay on the " Monetary Tangle of the Post-War World," Professor Alvin Hansen's on " Monetary Policy in the Upswing," Dr. Ohlin's and Dr. Lindahrs papers on stabilisation, Dr. Schumacher's apologia for the Heath Robinsonk n currency structure of Germany, and Professor Einaudi's charming excursion into mediaeval monetary practice. Mr. Keynes provides a terse but brilliant footnote (or should it be grace-note ?) to the General Theory ; the Canadian, Japanese, Chinese, Australian and Dutch contributors draw on the special experience of their respective countries, Dr. Findlay Shirras plunges into horrifying technicalities on the absorption of gold, and Dr. Jorgen Pedersen attacks the gold standard root and branch. Altogether a wide range of opinion is represented. It is a pity that the Austrian school finds no spokesman, and that no one has analysed and described the special experience of South Africa. The absence of the French economists—explained and deplored in the editor's preface—is also to be regretted. But one cannot have every- thing ; even if not quite complete, this cross-section of world monetary opinion provides rich fare for the reader and a worthy tribute to Professor Irving Fisher.