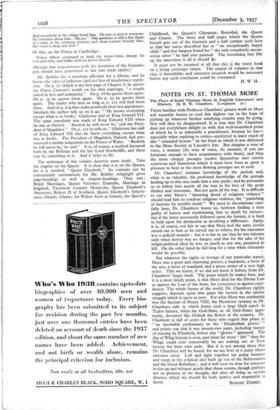 change of sovereign, and a new monarch to be added to his gallery. He had already dealt with Albert the Good, Victorin the Widow, and Edward VIII. Now, thanks to those indis- pensable scissors, that inexhaustible paste-pot and the old familiar diligence, a new volume on a new king takes its place in the lengthening row. It is a handsome volume, which with the publishers' skilful aid (thick _paper, large print and other serviceable devices) Mr. Bolitho has -made out of an ounce of fact and some pounds of padding. The essential facts about the King's career are- relatively few, and they arc all well known. His father's second son, he was educated for the Navy, fought at Jutland, won his wings in the Royal Air Force, played tennis at Wimbledon, showed a marked and laudable interest in- the industrial life of the country, started a' most adriiirable boys' camp, and last December became King-Emperor in his brother's place. The story ha', been told in excellent articles of about 1,50o words in many papers, and - Mr. Bolitho has singularly little of moment to add to it.

That does not mean that 'Mr. Bolitho has singularly little to add. He has singularly much to add. Of this order : To this day the gardener ,at Ranceby Cottage recalls Prince: Alberes experiMents with the wiz.' e-ntfting • chltken4un and hi :diligent work among the rose-beds. " Oh yes, we remember the Prince," he has said. " There was no side about him. Oh, so.

And everybody in the village loved him. He was so nice to everyone. No nonsense about-him— Oh, no." -The gardener is-still-a-fine figure of a man, in his corduroy trousers and clean-washed Sunday shirt. His voice is deep and slow." - Or this, on the Prince at Cambridge : Prince Albert continued to mark the tennis-lawn, change his own pen-nibs, and tinker with his motor-bicycle.

(Strange that acquaintance with the invention of the fountain- pen should have penetrated so late into royal circles.) Mr. Bolitho has a touching affection for a phrase, and he knows the value of judicious (and not less of injudicious) repeti- tion. On p. 17 (which is the first page of Chapter I) he quotes

Similarly the author tells us on p. 42, " He knows everything except what is in books,' Gladstone said of King Edward VII. The same complaint was made of King Edward VIII when he was at Oxford. Bookish he will never be,' said the Presi- dent of Magdalen." On p. 112 he tells us, " Gladstone has said of King Edward VII that he knew everything except what was in books. The President of Magdalen, Oxford, had pro- nounced a similar judgement on the Prince of Wales. Bookish he will never be,' he said." It is, of course, a method favoured both -by the Bellman and the late Lord Northcliffe, and there

may be something in it. And it helps to fill.

The technique of this voluine deserves some study. Take the chapter on the Queen. It is clear that it is on the Queen,' for it is entitled, " Queen Elizabeth." Its contents can be conveniently summarised, for Mr. Bolitho obligingly gives page-headings as well as chapter-headings. They run : Royal Marriages, Queen Victoria's Example, Marriage in England, Twentieth Century Monarchy, Queen Elizabeth's Ancestors, Robert II of Scotland, Queen Elizabeth's Inherit- ance, Glamis, Glands, Sir Walter Scott at Glamis, the Queen's Childhood, the Queen's Character, Betrothal, the Queen and Glamis. The three and half- pages which the Queen herself gets out of the fourteen and a half contain such facts as that her nurse described her as " an exceptionally happy child " and that Sargent found her " the only completely uncon- scious sitter " .he had' ever painted: The moralising that fills up the interstices is all it should be.

It must not -be assumed at all _that this is the worst book on a living sovereign extant. The output of volumes in that class is formidable, and extensive research would be necessary before any such conclusion could be warranted.