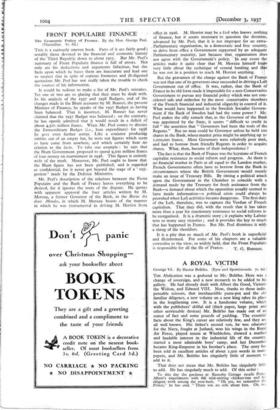 By the Hon. George Peel. (Macmillan. 8s. 6d.) THIS is a curiously uneven book. Parts of it are fairly good; notably those devoted to the financial and economic history of the Third Republic down to about 1925. But Mr. Peel's summary of Front Populaire finance is full of 'errors. • Not only are his deductions and arguments fallacious, but the facts upon which he bases them are inaccurate and lead one to suspect that in spite of copious footnotes and ill-digested quotations Mr. Peel has not really taken the trouble to check the sources of his information.

It would be tedious to make a list of Mr. Peel's mistakes. Yet one or two are so glaring that they must be dealt with. In his analysis of the 1937 and 1938 Budgets, and of the changes made in the Bluni accounts by MI Bonnet, the present Minister of Finance, he speaks of the 1937 Budget as having been balanced. That is incorrect. M. Bonnet has never claimed that the 1937 Budget was balanced ; on the contrary, he has openly admitted that it would result in a deficit of about 4,56o million francs. When Mr. Peel comes to discnis the Extraordinary Budget (i.e., loan expenditure) for 1938 he goes even farther astray. Like a conjurer producing rabbits out of an empty hat, he trots out figures which seem to have come from nowhere, and which certainly bear no relation to the facts. To take one example : he says that the Blum Government proposed to spend 9,50o million francs of loan money on rearmament in 1938. This figure is entirely wide of the mark. Moreover, Mr. Peel ought to know that the Blum figure has not been published, and is regarded as confidential, for it never got beyond the stage of a ` sug- gestion ' made by the Defence Ministries.

Mr. Peel's description of the relations between the Front Populaire and the Bank of France leaves everything to be desired, for it ignores the roots of the dispute. He quotes with apparent approval the four articles written by M. Moreau, a former Governor of the Bank, in the Revue des deux Mondes, in which M. Moreau boasts of the manner in which he was instrumental in driving M. Herriot from office in 1926. M. Herriot may be a fool-who, knows nothing of finance, but it seems necessary to question the doctrine, advanced by Mr. Peel, that it is not improper for an extra- , Parliamentary organisation, in a democratic and free country, to drive from office a Government supported by an adequate . Parliamentary majority, just because that; organisation does - not agree with the Government's policy. s In any event the articles make it quite clear that M. Moreau himself kr* very little about the technique of central banking and that he was not in a position to teach M. Herriot anything.

But the gravamen of the charge against the Bank of Frange was not that one of its governors once succeeded in driving a Left Government out of office. It was, rather, that: the Bank of France in its old forrnrnade it impossible-for a nonConservative Governin,- ent to pursue any financial policy which was not con- - sidered safe and orthodox by, the most conservative Members of the French financial and industrial oligarchy in control of it. What would have happened_ to the Swedish Socialist Govern- ment if the bank of Sweden had had the saine power ? Mr.

Peel makes the silly remark that, as the Governor of the Bank was appointed by the State, it seems " difficult to credit in full " the assertion that " Governors had been the tools of the Regents." But no man could be Governor unless he held loo shares in the Bank, whose market price might be anything up to• i,000,000 francs. Most Governors were relatively poor men, and had to borrow from friendly Regents in order to acquire shares. What, then, became of their independence ?

The feeds that the Bank of France was the keystone of French capitalist resistance to social reform and progress. As there is no financial market in Paris at all equal to the London market, French Governments. often-have to borrow from the Bank in circumstances where the British 'Government -would merely make an issue of Treasury Bills. By timing a political attack upon the Government in the Chamber to coincide with a demand made by the Treasury for fresh assistance from the Bank—a demand about which the opposition usually seemed to have inside information—a political crisis could always be provoked when Left activities became dangerons. The first duty of the Left, therefore, was to capture the Verdun of French capitalism. That they did, with the result that it has taken more than a year for reactionary resistance to social reforms to be reorganised. It is a dramatic story ; it explains why LabOur won so many easy victories ; and it provides the key to much that has happened in France. But Mr. Peel dismisses it with a shrug of the shoulders. - - It is a pity that so much of Mr. Peel's book is superficial and ill-informed. For some of his chapters are a valuable corrective to the view, so widely held, that the Front Populaire is responsible for all the ills of France. . T.G. BARMAN.